There’s tech. We all know profits from this sector are explosive. Amazon, Google, and Apple made investors rich all over the world.

But EVs go beyond tech.

They’re also an infrastructure play. We’re building networks of electric grids, chargers, and even special roads across the country.

Multiplying those numbers… the gains get absolutely insane.

But the most explosive booms happen in obscure metals. The kinds most people never hear of… and couldn’t pronounce even if they did.

These are the tech metals. They were my first glimpse of hard tech and its epic gains.

Let me show you two examples…

You don’t have to spell these weird metals to profit from them. To make it easier, I’ll call them by their chemical symbols, Nd and Dy.

Few investors know about Nd and Dy. But tech insiders obsess over them. Leading technology like EV engines, 5G cables, and even cruise missiles rely on parts built with Nd and Dy.

This is hard tech – metals powering the biggest trends on Earth. They aren’t available at will like U.S. dollars… There’s only so much supply in mines around the planet.

Every so often, that supply runs dry.

That’s what happened with Nd and Dy in 2009 and 2010. Back then, China cut off its exports of this hard tech (it holds a virtual monopoly on Nd and Dy…)

There wasn’t enough to go around. That left two options.

Or, let prices explode to encourage supply – from any place we could get it.

Obviously, the world chose the latter. There’s just no way we could live without this hard tech. All our communications, transportation, and defense systems would crumble.

Here’s what happened to Nd prices… 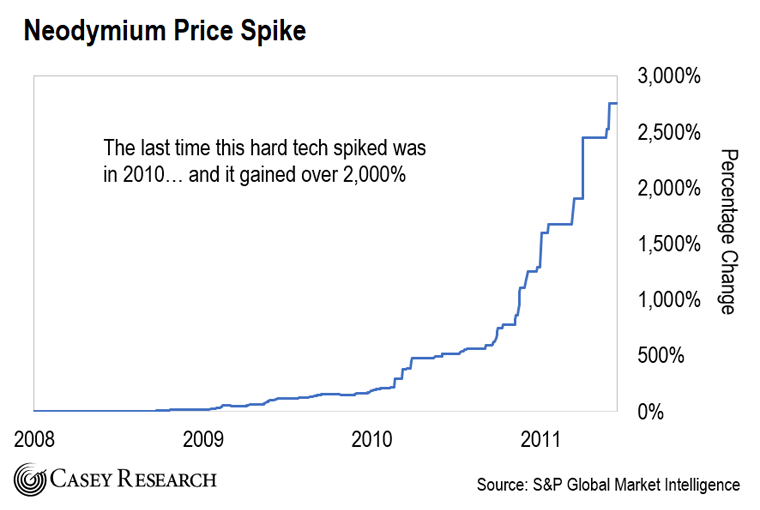 Share prices of companies producing this hard tech ripped even higher. It was like if Apple could suddenly sell MacBooks for $20,000 apiece.

It was a bull market for the ages. Investors I knew made enough money in 18 months to retire for the rest of their lives.

That opened my eyes to hard tech. I realized it’s dynamite uniting technology and hard assets.

Vanadium is another obscure piece of hard tech. It’s used in large batteries – the kinds that store wind and solar power.

At the same time, the “old world” still demanded a lot of vanadium. It’s a key component in one of the world’s biggest industries: steel for building construction.

You can probably guess – the price sheared upward. 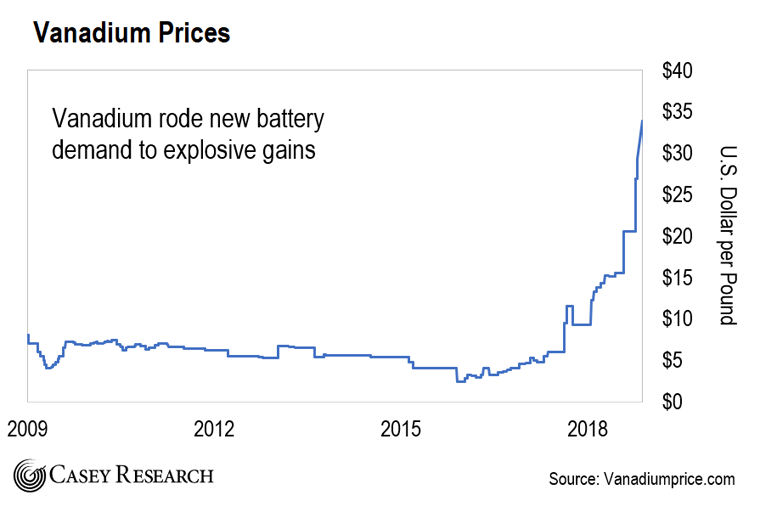 Once again, vanadium stocks performed even better. Investors made fortunes in a matter of months.

Now, we have EVs.

Just look at the news. Tesla invested in a nickel mine in Minnesota. The EV giant also bought into a North Carolina lithium mine. Then, it got into an African graphite operation.

After Elon Musk’s buy-in, nickel prices shot up. The lithium company that Tesla partnered with in North Carolina saw its share price rocket from $4 to $89…

You’re going to hear a lot more about hard tech booms like this. They’ll be popping up everywhere, in places you never dreamed of.

Even General Motors invested in lithium, looking to grab a piece of this key hard tech. The EV revolution is blowing this sector out of the water.

The profits are proven. The potential is astronomical. The trend is in motion, and it will mint yet more hard tech fortunes as EVs roll out across the planet.

In fact, the profit potential is so massive… that I’m preparing for a live stream event – the EV Superboom Summit – on Wednesday, March 2 at 8 p.m. ET to get the word out.

Because most people know there are profits in the EV space… but they’re looking in the wrong places.