First order of business is to thank those of you who wrote in with comments about yesterday’s article on the healthcare debate. I’ll share some of those emails later in the week, along with some further comments.

As for the news, I’m beginning to feel like a ringside spectator to a boxing match. Gunther Green Shoots opened today’s round by jabbing with the news that German consumer confidence rose more than analysts expected, but Bruno Brown Weeds soon countered with a body blow that U.S. housing starts unexpectedly fell in July (though the blow was somewhat blocked by a slim increase in single-family home starts).

So far, the judges seem to be giving the round to Gunther, but the day is still young. Personally, I don’t think something as fleeting as consumer confidence in Germany holds up to the rather more tangible decision of consumers and builders in the U.S. to keep their shovels sheathed. Sentiments can turn around on a dime, but the decision to spend money building houses, especially as winter approaches, typically doesn’t.

Per comments I have made here recently, we are now witnessing the best news for housing we’ll have all year. I wonder how the judges will score it when housing gets knocked to its knees again as we move into fall?

On that topic, I am noticing that a lot of struggling motels and previously “for sale” houses in these parts are now coming back on the market as rentals. This is the sort of capitulation that is needed, along with home sellers slashing prices and banks recognizing losses, in order for a sustainable turnaround in housing to materialize.

Meanwhile, there is something rather more pressing that catches the eye. A trend that, if it accelerates, will spell big problems ahead for the U.S. dollar and, by extension, the economy. I’ll let Bud pick up the story from here…

Cross-border flows of capital investments of all kinds have dramatically fallen off. The big picture, as reported in the United States Treasury’s International Capital (TIC) System, shows a decline in the 12-month sum of flows through June. 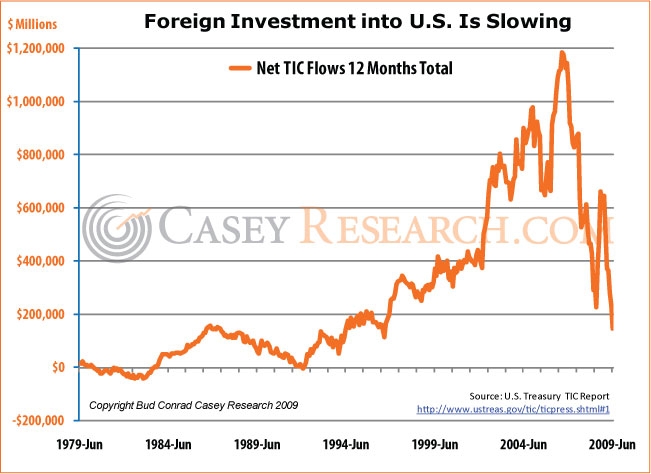 The annual sum peaked in August 2006 at just under $1.2 trillion of foreign capital flows. That number has collapsed to under $200 billion. The 12-month sum gives a better indication of the situation than the latest monthly data, because numbers jump around surprisingly. The data here were reported August 17, 2009.

A big component of flows, investments in all long-term securities over the last 12 months, has dropped almost to zero. 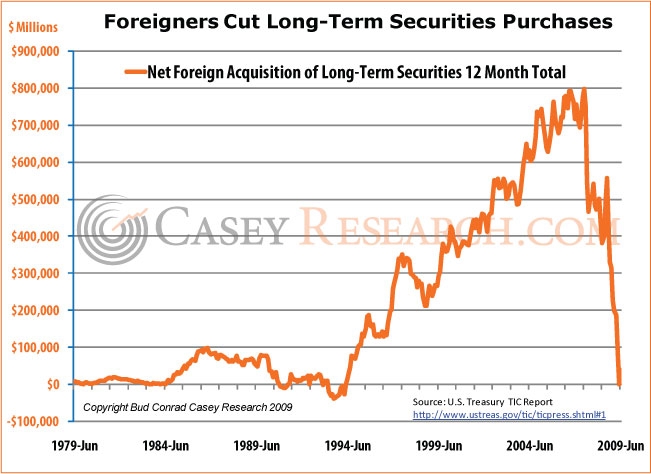 And the composition of investments has shifted, with the world moving away from riskier assets towards Treasuries and government-supported agency debt. 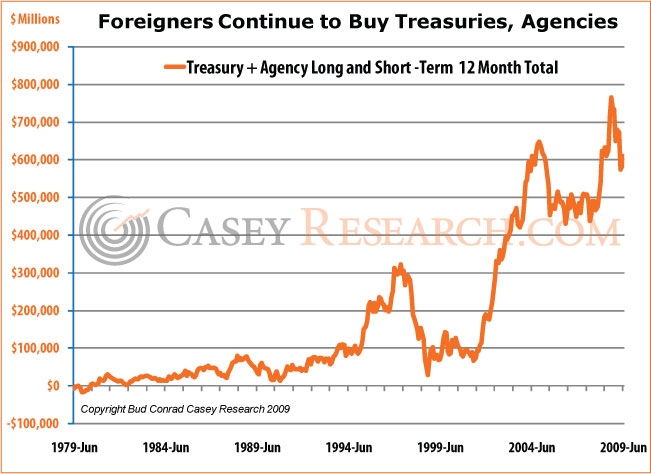 An even closer look into the Treasury debt investment by foreigners shows a dramatic shift from longer-term paper of over one year duration to shorter-term T-bills: 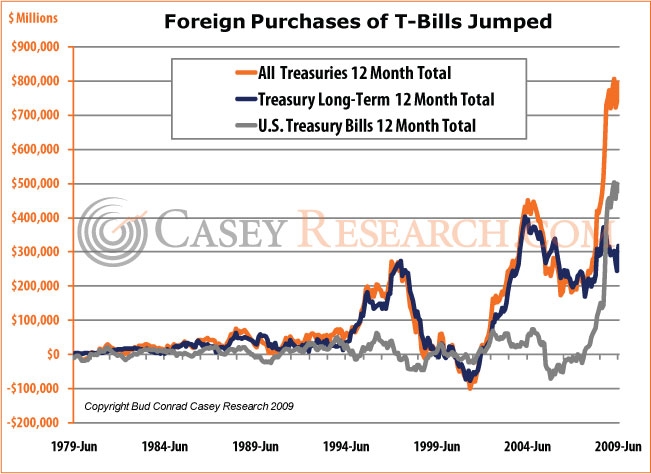 The shift to three-month Treasury bills as the investment vehicle of choice is probably due to foreigners fearing that higher interest rates on the longer-term paper could cause their investments to decline. Perhaps investors also want the flexibility of redeploying their money in other places within a short period of time. It could be from a lack of confidence in the long-term prospects for the U.S. dollar. Then there is even some speculation that excess dollars created by the Federal Reserve in swap transactions could perhaps be reinvested in short-term U.S. Treasuries to provide liquidity for the U.S. government.

An important reason for slowing investments is that the U.S. trade deficit is becoming less negative. That means foreigners have less money to reinvest in the U.S. from their trade surpluses. The investments of choice, away from the less secure and longer-term and into shorter-term, government-supported debt, suggest that the appetite of foreigners for U.S. investment is waning.

Along similar lines, there was a story out today that is more important for its position as the lead story in the China Daily than for its content. I take it as a message from China to the U.S. to be careful with the dollar or face further selling. Here’s the story…

NEW YORK: China reduced its holdings of US Treasury debt in June by the biggest margin in nearly nine years, according to a US Treasury Department report issued on Monday.

China cut its net holdings by 3.1 percent to $776.4 billion in June from $801.5 billion in May, the report says. This is also the first large-scale reduction of US Treasury debt by China so far this year.

However, its June holdings were still larger than April’s $763.5 billion and $767.9 billion in March, according to the statistics of the Treasury Department.

Reuters data show the drop in China’s Treasury holdings in June was the biggest percentage reduction since a 4.2 percent cut in October 2000.

On the other hand, Japan, the second-largest holder of US Treasury securities, increased its holdings to $711.8 billion in June from $677.2 billion in May.

The United Kingdom, the third largest holder, also increased its holdings to $214 billion in June from $163.8 billion, a surge of 30.6 percent.

The UK buying is probably indirect from somewhere else, as they are an international center.

One could load up the old pipe, pour a brandy, and position oneself in a comfortable leather chair in front of the clubhouse fireplace for a leisurely debate about what money actually is, now that it’s linked to nothing.

Given that the U.S. dollar has no anchor and the government no discernable limit in how much they produce of the stuff, they likewise seem unhindered in how they spend it. Even so, one does want to believe that the shepherds of the dollar are shepherding it wisely.

How to explain, therefore, the decision of the Obama administration to lend $2 billion, and maybe more, to the state-owned Brazilian oil company so that it can further explore that country’s very deep, very challenging, and very expensive new offshore oil fields? Using our money, Brazil hopes to succeed in moving up in the ranks of foreign-controlled state oil draining the U.S. of its tangible wealth. I am sure that the Obama administration figures these loans will put us in the catbird seat when the time comes to negotiate for the lion’s share of the oil, but that ignores history. As administrations change here in the U.S., so do they change in Brazil. Who is to say that — if and when the Brazilian offshore fields are up and running — the Chinese won’t simply step in and use a slice of their reserves of hundreds of billions of dollars to trump us? Money can’t buy you love, and it can’t buy the unswerving fealty of a sovereign state.

So much for energy independence.

You can read a commentary on this latest example of your tax dollars at work — for someone  else — by clicking here. 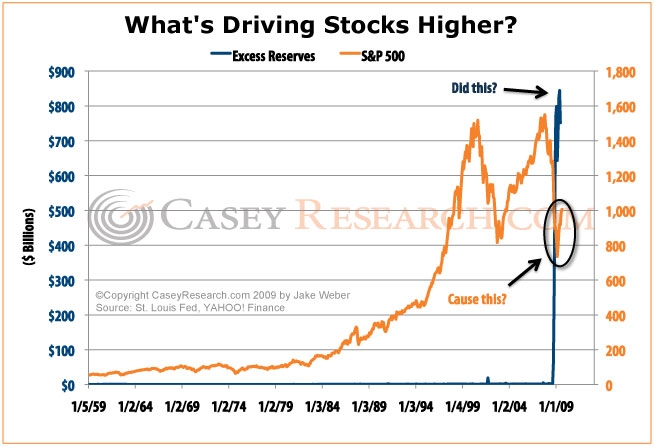 Attempting to prevent a collapse of the financial markets, the Fed continues its program of quantitative easing (QE) with aggressive injections of money into the economy by purchasing over a trillion dollars worth of Treasury and agency debt and mortgage-backed securities.

The Fed intended to increase lending activity, yet the banks are simply building cash reserves. Like Japan’s experiment with QE, a massive injection of money into the banking system was almost simultaneous with a bounce in the country’s stock market.

Are investors really encouraged by economic reports and quarterly earnings that are “less bad” than anticipated? Or are false signs of recovery from government intervention propping up the stock market?

With last week’s FOMC announcement that Fed purchases of Treasury debt will finish by the end of October and agency debt by year’s end, we may soon find out.

It takes crystal ball-gazing skills to truly predict where stocks will trade tomorrow… a skill we don’t have. But there are trends so big and seemingly obvious (to us), to ignore them would be foolish. Especially when they offer tremendous opportunity to profit, as is the case with Bud Conrad’s favorite investment of 2009.

Vote for Obamacare or the Dog Gets It! 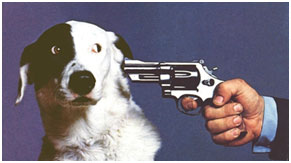 Recently I wrote on the topic of the disaster now unfolding in Hamburg, one of the world’s most important shipping ports.

Yesterday, that news was echoed closer to home – around the ports of Los Angeles and Long Beach. An excerpt…

As the ports of Los Angeles and Long Beach post another round of dismal monthly import statistics, a new assessment finds that the nation’s busiest seaport complex will need at least four more years to fully recover its momentum — not to mention the jobs, incomes and revenues that went with it — after the worst global recession in 60 years.

The recovery will be so slow and painful that a return to the pace set during the economic boom year of 2006 — when the ports handled 15.8 million cargo containers bound for most parts of the U.S. — won’t come before 2013.

The entire article is worth a read, as it is another example of the challenges now being faced by the real economy. You can read it by following the link here.

That’s it for today. I’m cutting things short due to the call for other duties, but will be back tomorrow with more. As I sign off, I see that the DJIA is up 70 points, and gold is mirroring the gain by moving back to $940. So, pretty tame, compared to yesterday’s sharp sell-off.

Until then, thank you for reading and for subscribing to a Casey Research service.