Rachel’s note: As anyone with money in the markets knows, stocks have been extremely volatile lately.

But that doesn’t mean you should give up on your quest to make life-changing wealth as an investor.

As you’ll hear today from Casey Research friend and former hedge fund manager Teeka Tiwari, there’s a simple way you can dampen the effects of all that volatility in your portfolio.

All you need to do is focus on three alternative asset classes.

And tomorrow, on March 23 at 8 p.m. ET, Teeka is going live to share details about an asset class offering the most profitable opportunity of the past 150 years… and it’s delivered past returns of 47x, 100x, and 159x.

Go here to reserve your spot for Teeka’s event. Then, read on for more about how to protect your wealth during a market downturn…

If you’re a first responder, police officer, firefighter, or teacher… your retirement account is probably taking a beating right now.

According to a recent report from The Wall Street Journal, volatility is eroding the retirement savings of America’s public pension systems.

Public pension funds hit a 10-year median high of 61% of their assets in stocks as of December 31. Ten years ago, that number was 54%, according to Wilshire Trust Universe Comparison Service.

And the timing couldn’t be worse. Since Russia invaded Ukraine and the Federal Reserve announced a series of rate hikes… the market is down 13%.

The fund reported total holdings had fallen from $482 billion to $475 billion from January to March. That’s $7 billion in wealth evaporated in less than two months.

I know it’s hard to hear. But in the short term, things will likely get worse.

If you’re dependent on public retirement funds or worried about your portfolio… now is the time to look to alternative assets.

Volatility is the new normal for the foreseeable future, affecting anyone with money in the market.

With a new environment of higher inflation… potential rate hikes on the horizon… and a war in Europe… I expect market choppiness to continue.

That’s why I consistently recommend you invest in alternative assets that add diversification and reduce overall portfolio volatility. Today, I’ll share three you should add right away…

Bitcoin and other cryptos are the most powerful examples of how you can protect your wealth.

Now, we know bitcoin has been selling off with broader equity markets. But this is a short-term correlation.

If you pull back the lens, you’ll see bitcoin has been one of the best inflation-fighters of all assets.

As I’ve explained many times, the Federal Reserve can print as much money as it likes. But no one can make more bitcoin.

In fact, the supply of bitcoin is strictly limited and hardwired right into its code.

That’s precisely why you’ve seen more and more money plowing into the crypto.

Smart people realize it’s one of the best ways to protect – and actually increase – their purchasing power in the face of money printing and rising inflation.

This is precisely why bitcoin has wildly outpaced any other currency or investment you can think of over the past decade.

Take a look at this recent tweet from Alex Gladstein – a bitcoin advocate who works for the Human Rights Foundation – for a terrific illustration of that: 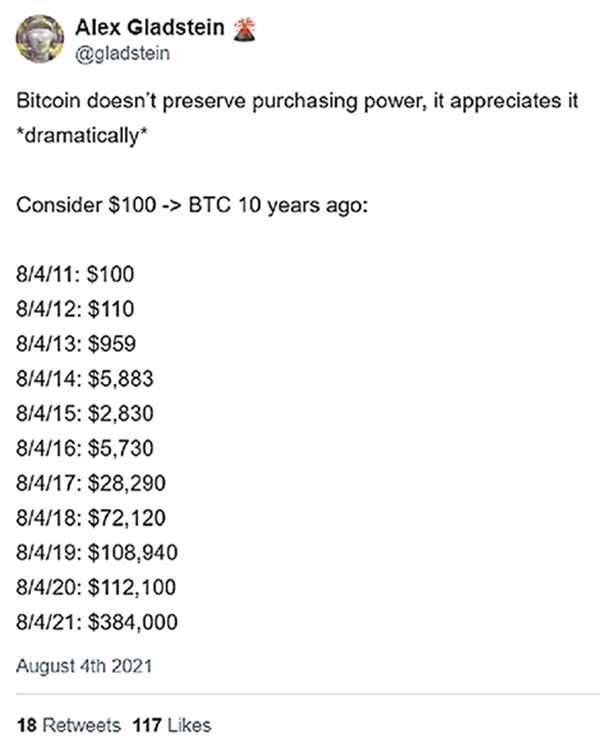 I first recommended bitcoin and ethereum to my subscribers back in April of 2016.

Those gains are high enough to combat some of the worst bouts of hyperinflation in history, even including the recent pullbacks.

If you don’t have any exposure to bitcoin, use this pullback to get some now. I believe it’ll hit $500,000 in the coming years. So that’s a 10x return on crypto’s equivalent of a blue-chip asset.

Use the fear and uncertainty in the crypto market to take advantage of lower prices. And then hold on as bitcoin once again rises to new all-time highs.

According to Bloomberg, in the first week of March, commodity prices saw their biggest weekly gain since at least 1960.

And a recent study by Vanguard found that for every 1% rise in inflation, commodities rise anywhere from 7% to 9%.

Summer Haven, an asset management firm, sifted through 50 years’ worth of data on different asset classes in varying environments. Its goal was to find the best-suited assets that offer outsized returns over different inflationary environments.

It found that during periods of rising inflation, the prices of commodity futures rose over 5x more than those of U.S. stocks. 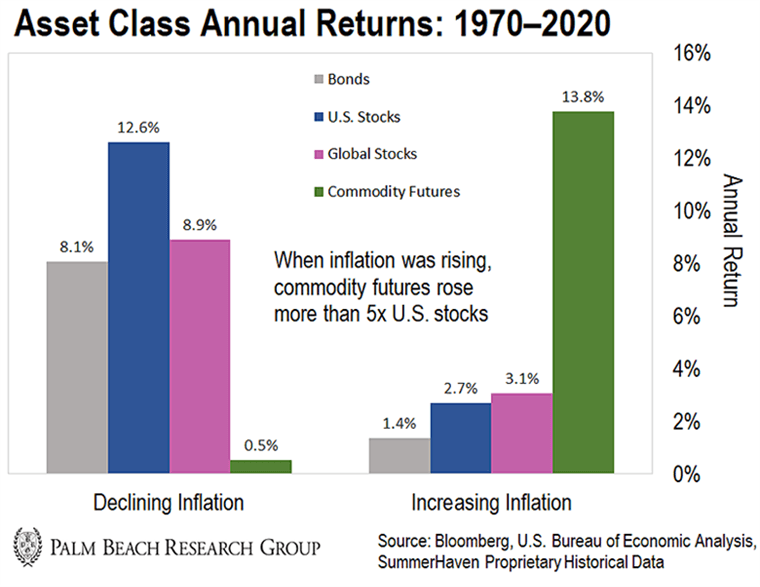 And when commodity prices rise, the companies with revenue tied to those prices tend to do even better.

Take the beginning of this year…

Metals producer Century Aluminum is up 36% year to date (YTD)… potash miner Intrepid Potash is up 85% YTD… and oil-and-gas company RPC Inc. is up 134% year to date.

All while the broader market is down about 20% over the same period.

If you want exposure to commodities, consider an ETF like the Invesco DB Commodity Index ETF (DBC).

This ETF is a “rules-based” index – meaning its holdings are chosen via algorithm or data, not a human – composed of futures contracts on 14 of the most heavily traded and important commodities in the world.

(So, things like crude oil, gold, wheat, and silver.)

Even after a slight dip in early March, it’s still up about 26% since the start of the year.

Crypto and commodities are some of the best inflation-beating assets around… and they can be a strong defensive play when assets like stocks and bonds are taking a beating.

But to truly balance out your portfolio, you can’t stop there… That’s why we also recommend diversifying into private companies, or what we call “pre-IPOs.”

Pre-IPOs raise funds through a Regulation A+ or Reg CF offering… private funding that isn’t affected by public market volatility.

By operating as private entities, pre-IPO companies can methodically execute business plans outside of the wild swings of the public markets.

The best private companies can easily build up substantial war chests, too. Then they can use that money to buy distressed assets on the cheap whenever volatility creates bargains.

Meanwhile, if the market stays volatile, they can stay private until conditions are more favorable to go public.

For all these reasons, studies by research firms like Blackstone and KKR show that private companies consistently outperform the S&P 500.

They also have lower volatility than publicly traded companies… and perform better during challenging times.

So, with all the volatility we’re seeing in the public markets, now’s a great time to get some exposure to the best private companies.

And recently, my team came across a pre-IPO company that’s found a way to produce oil at a cheaper cost than anywhere else in the world.

More importantly, we believe it could help the U.S. replace oil imports from Russia.

After vetting this private company… a Wall Street powerhouse recently wrote a check to become the largest shareholder.

Understand: This firm’s deals are some of the most profitable opportunities of the past 150 years… including returns of 47x, 100x, and 159x.

This time, the difference is that you can get a seat at the table, too.

During this special briefing, I’ll tell you what this company is… the technology it’s using to create low-cost energy… and the Wall Street powerhouse backing it.

Best of all, you learn how you can get shares for just $1.25. Accredited investor status is not required. But as with all private deals, shares are strictly limited.

So it’s critical you’re in attendance tomorrow. One of my last private deals closed in 12 hours. I expect this deal could go even faster.

Click here to reserve your spot and learn more.