When we came into 2020, mainstream stocks were flying: The S&P 500 was up 33% from the previous year, including reinvested dividends.

Gold was on the rise, too. But few investors were paying attention.

We all know what happened next.

Since the corona-crash, large stocks have struggled. The S&P 500 is still below its February peak. But physical gold has recovered all its March losses and moved higher. Same with gold stocks – you can see in the chart above how the VanEck Vectors Gold Miners ETF (GDX), which holds a basket of major gold miners, is soaring.

True, the wider markets are also recovering. But recent resurgence in COVID-19 calls for caution on mainstream stocks. It also suggests gold could soar further on safe-haven demand.

There may be bumps along the way. If we get another massive market sell-off, gold and gold stocks will likely get hit, too – at least temporarily.

But news about COVID-19 resurfacing actually sent bullion higher. It reached a historic high of nearly $1,940 per ounce on Monday.

At that level, you might think you’ve missed the boat. But a look at the numbers shows otherwise.

Ratio charts pit one stock against another. They’re the closest thing we have to a crystal ball. We can use them to pit commodities against stocks.

They show this sector is still incredibly cheap – and in the first innings of a bull market.

Unbelievable but True: These Stocks Are Still Incredibly Cheap

The March crash in gold and commodities was a great buying opportunity. And there will be more drops like that…

But even with the massive rally in gold stocks over the last few months, the sector is still undervalued today.

Below is a chart I’ve shown you several times over the last few years. It’s a ratio of commodities (as measured by the Global Commodities Index, or GSCI) to mainstream stocks (the S&P 500).

Take a look at where we are now…

Last year, I was pounding the table that commodities were headed for a big move up. At the time, the commodities-to-stocks ratio was hitting all-time lows. Hard assets were exceptionally cheap, relative to other asset classes.

Then, gold jumped 35%. Gold stocks had one of their biggest runs in decades. But here’s the amazing thing: even after that big move up, commodities have actually gotten cheaper relative to mainstream stocks. You can see how the ratio has – incredibly – moved even lower in recent months.

Not only are commodities remarkably cheap, but they’ve been cheap for a long time. The chart shows how the current undervaluation in commodities has persisted for years. Longer than previous dips in the ratio.

Lows like this are very often a prelude to major commodities bull markets. The action we’re seeing in gold right now is the opening act.

Take a look at the chart below, which tracks the ratio of gold to the Wilshire 5000 Total Market Index – a broad index of the market value of all actively traded U.S. stocks – back to 2008.

A rising line in the chart signifies a time when gold did better than stocks. With a falling line, stocks outpaced gold. 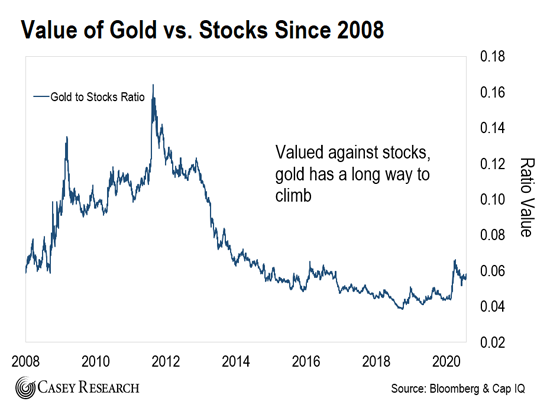 As the chart shows, gold did far better than stocks the first few years following the 2008 crisis. As time passed, stocks recovered. They found new footing in a bull market, and gold lagged for years. But that ended last year.

This ratio of gold to stocks shows us this bull market in gold is only in the first inning. Which means there’s still time for you to get involved.

This Market Still Has Plenty of Room to Run

Governments globally are printing trillions of new dollars. The U.S. alone has pumped over $1.5 trillion into the economy since March. That’s significantly more than the total cash injection in the wake of the 2008 crisis.

Could the same thing happen again? Yes. Just like then, we’ve got massive inflation of the monetary base. If even a small amount of that cash ends up in commodities, it will explode hard assets to new highs (like we saw yesterday with gold).

Yes, there are concerns about the global economy. Many investors believe copper, oil, and other industrial materials will suffer. Investors had the same worries in 2009. But it didn’t stop all manner of commodities from surging higher.

No one knows for sure if it’ll be the same this time. But it pays to be ready. When it starts, it can happen fast. Fortunes were made after 2008, in very short periods of time – sometimes a matter of weeks.

If you’re looking for a convenient way to gain exposure, consider adding shares of the VanEck Vectors Gold Miners ETF (GDX), which holds a basket of major gold miners.

P.S. We’re in the early innings of a commodities bull market. And there’s an unfolding megatrend that will give it a boost – electric vehicle revolution.

You see, the batteries that power electric vehicles are made up of critical metals… that are the driving force behind this revolution. And as the rollout ramps up, manufacturers will need to secure supply of these materials.

Recently, I discovered a tiny company on the verge of a multibillion-dollar deal with Tesla. It could happen any day now. And early investors stand to make a fortune.

Go here for all the details.