One of gold’s biggest critics just changed his tune.

I’m talking about Warren Buffett. “The Oracle of Omaha” has a net worth of about $78 billion, making him the seventh-richest person in the world, according to Forbes. His company, Berkshire Hathaway, owns about $240 billion worth of investments.

Yet while Buffett made his fortune investing in all kinds of companies, he’s always been negative on gold. Here’s what he said in a speech at Harvard in the 1990s:

Gold gets dug out of the ground in Africa, or someplace. Then we melt it down, dig another hole, bury it again and pay people to stand around guarding it. It has no utility. Anyone watching from Mars would be scratching their head.

In a way, he’s right. Gold isn’t used for industrial purposes as much as other precious metals are. And Buffett’s also harped on gold in the past because it doesn’t pay any interest or dividends.

Yet last week, Buffett’s company revealed it placed a huge stake in Barrick Gold (GOLD), one of the world’s largest gold miners, to the tune of $565 million. That makes Berkshire Hathaway Barrick’s 11th-largest shareholder.

So what made Buffett do a 180 on one of his most hated investments?

It’s simple: Even gold’s critics are starting to wake up to the fact that we’re in the early innings of a historic gold bull market.

But this is only a temporary dip. The underlying factors behind gold’s rise haven’t changed.

Below, I’ll explain why this gold bull isn’t stopping anytime soon… and how we can follow in Buffett’s footsteps to take advantage…

This Crisis Will Propel Gold Higher

Without getting too much into the weeds, I expect that the COVID-19 crisis will drag on until at least 2022. And that will pull down interest rates and the U.S. dollar, boosting the case for gold.

These are not the only factors driving the price of gold, of course.

Inflation is likely to return after the government engaged in massive stimulus programs to fight the economic impact of COVID-19. So far, the Federal Reserve has printed over $3 trillion of new money.

This is a road well-paved for both the U.S. government and its global peers. Papering over problems with fiat money is a trick used in many places, from Venezuela to Zimbabwe.

Doing that destroys the value of the currency. As the dollar’s supply goes up, its buying power goes down. But since gold’s supply is fixed, it can maintain its value even as the dollar declines.

That’s a big reason why Crisis Investing chief analyst Nick Giambruno made sure his readers have plenty of exposure to gold. And it’s paid off. Two of his gold picks are up 201% and 91%, with another up 42% in just four months.

With the Fed’s monetary policy out of control, Nick believes gold is just getting started. As he explains:

And for the first time in over 50 years, gold is returning to its rightful place at the center of the international monetary system. That’s what makes this current gold bull market fundamentally different.

In other words, the outlook for gold is as strong as it has ever been.

But remember: While Buffett’s clearly bullish on gold like us, as far as we know, he didn’t buy physical gold. He bought a gold miner instead.

The reason is simple…

Why Gold Mining Companies Will Soar

I believe that gold miners are undervalued and will soar in the years to come – because gold will lead them higher.

That’s because gold miners have “leverage” to the price of gold. What this means is that when gold moves an inch, miners can move a mile.

Here’s a single chart that explains what I’m talking about – and why you should be looking at this space.

The VanEck Vectors Gold Miners ETF (GDX) holds a basket of gold miners and is a good proxy for the gold mining market. So far, it has outperformed gold this year. 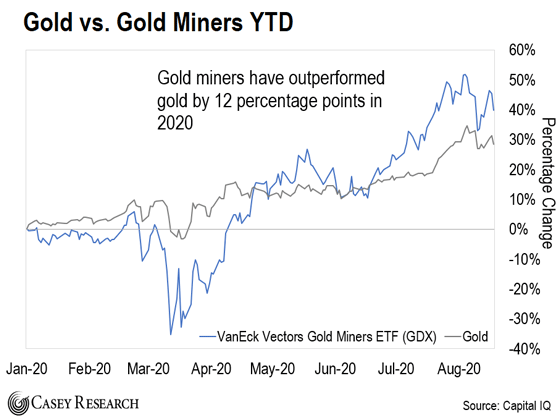 A bull market in gold equities often lags behind the one for gold.

This means that gold mining companies will soar higher soon as gold takes off.

In other words, while the gold bull market has already begun, the one for precious metals miners is just starting.

Warren Buffett realizes this. That’s why he just put over half a billion dollars at stake as a vote of confidence in the mining sector. It’s a signal that this sector presents good value.

If you want to take advantage of this unique opportunity, take a look at GDX. It holds a diversified portfolio of major mining companies, including Barrick, the same miner that Buffett recently bought a stake in.

As always, just make sure to do your research when investing, and never bet the farm on a single trade.

P.S. While Buffett may not like gold, it’s always been a great way to guard your wealth from government interference. And that’s never been more important than now…

My colleague Nick Giambruno has recently uncovered a sinister plan to confiscate everyday Americans’ wealth… and ban those who don’t comply.

He put together an urgent briefing with all the details, where he explains how you can protect yourself from this cash grab. Go here to watch it.