Hertz was one of the biggest American success stories of the 20th century. And now, it’s one of the highest-profile failures.

Founded over 100 years ago by 22-year-old Walter Jacobs, Hertz was essentially a startup, not unlike those launched in Silicon Valley by ambitious entrepreneurs today.

Over the next century, Hertz grew to over 12,000 locations and over $9.6 billion in annual revenue. It became one of the biggest car rental companies in America.

But the good times appear to be over for Hertz. Back in May, it filed for bankruptcy.

It’s obvious Hertz wasn’t prepared for a crisis like this. It’s just one example of a once-thriving company that’s been decimated by the COVID-19 pandemic.

Meanwhile, the market decided that Hertz will be fine – and that speculating on it after it filed for bankruptcy was a good idea.

Its shares are still in high demand thanks to novice investors, making Hertz seem like a good deal. This is why you have to be careful investing in popular, mainstream companies.

There are much better ways to put your speculative capital to work.

And below, I’ll show you which industries to keep on your radar as the pandemic continues… and the one industry that’s safer than others.

First, let’s talk about what’s going on with Hertz…

It’s easy to see what triggered Hertz’s downfall. Due to COVID-19, fewer people are traveling, so the demand for rental cars disappeared.

Hertz wasn’t prepared. Despite its high revenue before the pandemic, it posted losses in four out of the past five years. It also has over $20 billion in total debt.

Now, Hertz is in bankruptcy.

However, if you’ve been watching Hertz’s share price, you may think the company has turned itself around.

Normally, that would have been it for Hertz. But then, the share price staged a rally of monster proportions, soaring by almost 10 times in a matter of days – breaking $5.50 on June 8.

As of writing, it’s down two-thirds from that level – and only 36% below its pre-bankruptcy level. 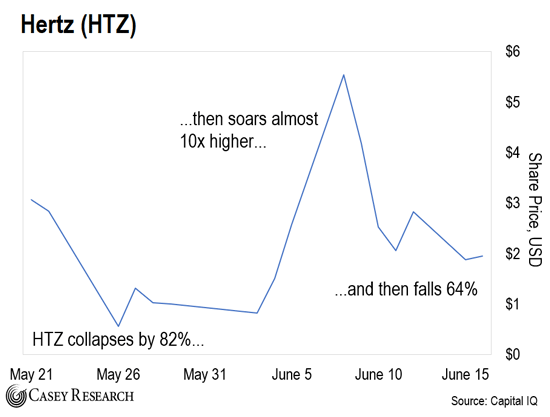 And Hertz continues to be heavily traded. It’s even trending on popular trading applications – like Robinhood, where there are currently over 167,000 users invested in Hertz, up from less than 2,000 three months ago.

But just because it’s popular doesn’t mean it’s worth buying. You should stay away from Hertz. The company is already in bankruptcy. Its equity is essentially worthless.

And the Securities and Exchange Commission agrees. On Wednesday, trading for Hertz was briefly halted after the company tried to raise an additional $500 million in new shares. After the SEC stepped in, the shares were retracted – and Hertz even warned potential buyers that its equity would probably become worthless.

But it’s not the only company suffering from this pandemic…

Watch Out for These Sectors

The pandemic is tossing a curveball at all kinds of companies. While Hertz and the car rental industry have been on shaky ground for years, even sectors that were once considered rock-solid may not be so safe anymore.

So, I decided to look at the historical data of bankruptcies in the US to understand what industries are more susceptible… and how some of our favorite ones, like gold, compare.

I looked at 395 bankruptcies that took place over the last 20 years, from a wide variety of industries with companies listed on US stock exchanges.

In short, gold and gold miners did very well. The chart below shows the five industries with the highest number of bankruptcies since 2000. To be clear, gold is not the sixth-highest industry for bankruptcies. It is only in the chart as a comparison. 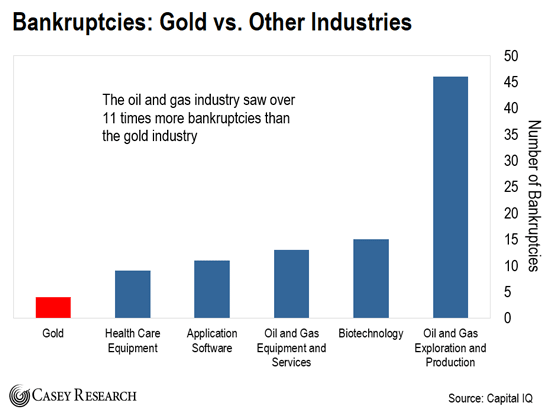 Even though the gold industry is one of the most volatile, gold companies don’t go bankrupt nearly as often as those in industries like application software, biotech, or oil and gas.

Even taking into account the sizes of each of these industries, bankruptcies in the gold sector still occur at a lower rate compared with other industries.

One of the reasons is that gold is an extremely resilient commodity. That means miners tend to perform especially well in times of crisis, while other companies struggle.

We’re seeing this today. While the world is struggling with COVID-19, and long-time giants like Hertz are going down, the gold industry is outperforming the broader market.

Since the March 23 selloff, gold is up 11%. And gold miners have outperformed the S&P 500 by about 11 percentage points. 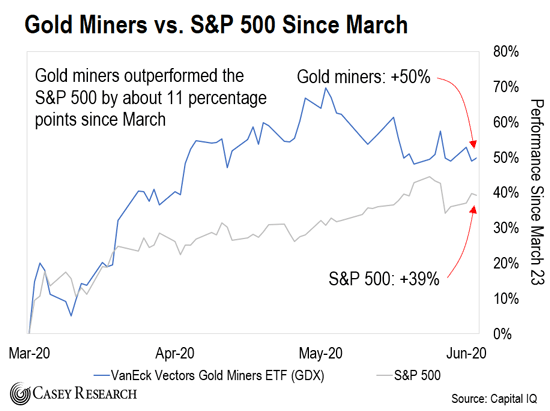 Of course, there are still risks. Mining juniors can deliver both stellar returns and big disappointments. That’s why we always suggest that you diversify your portfolio and don’t bet the farm.

If you want to speculate – and have a lower chance of running into worthless companies – the gold mining sector is a good place to start. The VanEck Vectors Gold Miners ETF (GDX) is an excellent way to get some exposure. It holds a basket of major gold miners that are sure to do well as gold continues its rise.

P.S. Big stories like Hertz get all the attention… but if you want to find profitable opportunities most investors only dream of, you have to look outside the mainstream.

That’s why you need to hear this urgent message about the coming 5G revolution. Some investors are expecting to make a fortune from this trend… but there’s a fatal flaw in the technology that few know about. And it could stop the 5G story dead in its tracks.

Luckily, there’s a solution in the works. And early investors could make a windfall… if they know how to take advantage. Get the details right here…