For once, mainstream headlines are telling the truth. The gold price has been setting new records this week. It hit an all-time high of $1,961.05 per ounce on Tuesday.

As of writing, gold is up 33% year-to-date. It has completely recovered from the COVID-19 drop in March. And it kept growing as the world kept struggling with the pandemic.

As I’ll show you below, with the post-COVID economic recovery still on shaky ground, gold will continue rising.

Plus, it’s important to remember that the current price level is a record in nominal terms, but not in inflation-adjusted terms.

Comparing Past to Present

As a reminder, inflation-adjusted prices allow you to compare costs over time.

Over time, money loses its value. So past prices for the same goods will almost always be lower than they are today.

In other words, gold’s all-time high of approximately $2,899 is 48% above its nominal record this year. 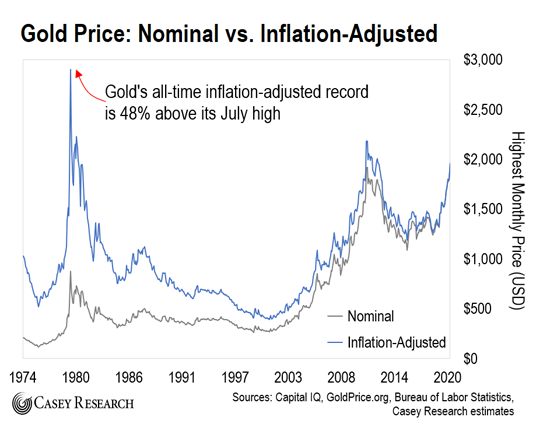 So even though people are right when they say that gold is trading at record levels… in real, or inflation-adjusted terms, gold is still far from the prices it reached during past bull markets.

There’s a lot of upside for gold. But how about its sister metal, silver?

Silver tends to loosely follow gold’s price. They don’t trade in tandem because silver has industrial applications, which also affects its price.

But in times like these, both tend to be viewed as safe havens… though silver is the more volatile of the two.

Does that mean silver will outperform gold during the bull market that we see coming?

The signs are definitely there.

First, silver continued moving largely in the same direction as gold this year. Its COVID-related drop was steeper… but that was anticipated.

Casey Research’s gold and silver expert, Dave Forest, actually studied this phenomenon. He conducted a deep-dive analysis of the last four major financial crises (before COVID-19) to determine the best resources to own leading up to, during, and after a financial crisis…

He shared some interesting revelations about gold and silver. Here’s what he found out about the former:

During the last four major financial crises, gold was the only metal that increased in value during a crash, gaining an average 3%.

And according to Dave, silver’s steep drop was expected, based on his research:

Perhaps because of its industrial uses, silver tends to take a much larger hit during crashes, falling an average 13%. It does rebound well after the storm clears, so best to wait until a bottom in order to take positions.

Looking at the data, Dave’s thesis is already playing out:

And as of this writing, silver’s outperforming gold year-to-date. I believe that there is a lot of room for silver to rally. 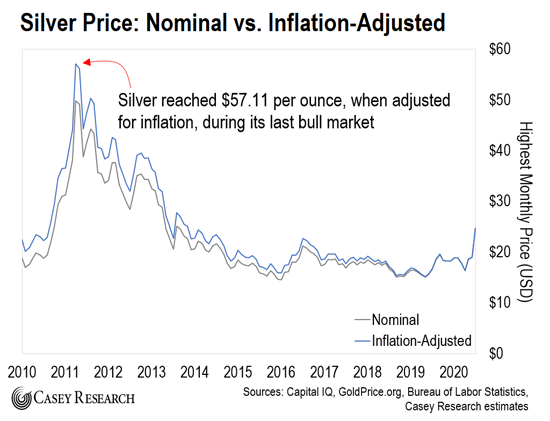 But that wasn’t the highest price silver has ever achieved.

So the current price of silver needs to go up by almost seven times before it hits its all-time high in real terms.

So silver needs to rise by 135% to match its most recent inflation-adjusted peak, and by 587% to beat its all-time record.

Gold and silver are still undervalued. Even though gold has reached an all-time high in nominal terms lately, its “real” record hasn’t been beaten.

But the uncertainty around COVID-19, and the economic fallout that the pandemic caused, tells me that these safe-haven assets have a lot of room to go up.

Below, Dave Forest’s research, again, shows gold and silver’s performance before a crisis… during a crisis… and one year after a crisis: 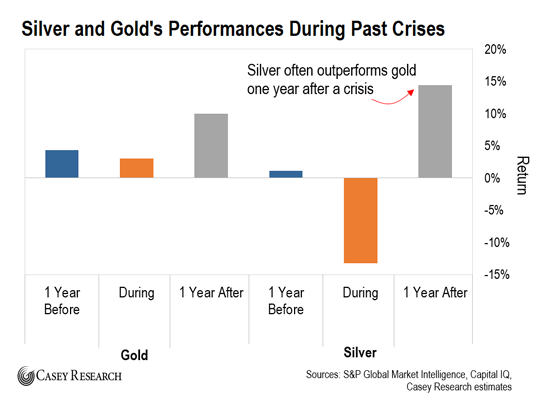 As you can see, silver and gold both show big gains in the year following a crisis. In short: You haven’t missed the boat on these metals yet.

2020 has been tough. Holding gold and silver is a great way to strengthen your portfolio this year, and prepare for 2021.

To get easy exposure to gold, take a look at the SPDR Gold Trust (GLD). It’s backed by physical gold, which means that its shares give you partial ownership of real gold ounces stored in a safe vault in London. For silver, try iShares Silver Trust (SLV), which is backed by physical silver ounces as well.

Just remember to always do your research before making any investment. And don’t bet the farm on any single trade.

P.S. If you want your wealth to make it through this crisis intact, you’ll need more than gold or silver…

That’s because my colleague Nick Giambruno has exposed a sinister government plan hidden in a pandemic stimulus bill. The goal: to confiscate your wealth and ban anyone who doesn’t comply.

The details are shocking. But there are steps you can take to be prepared. Just go here to watch his urgent briefing now.