That’s what my grandpa told me right before I made a move that saved me over $80,000.

Now, my grandpa was a smart man, and a smart investor. In fact, he’s the person who first introduced me to investing when I was a kid. And we had a very close relationship. I valued his opinion tremendously.

But this time, we disagreed on how to play a certain stock. And I was forced to follow my gut instinct – even if it meant going against my grandpa’s advice.

How did it play out? I’ll explain in a moment. Just know that it was probably the biggest investment lesson I’ve ever learned. But first…

My grandfather’s mentorship is part of what allowed me to experience the investing success I have today.

Since then, I’ve founded several companies, including one I recently helped take public.

And I’ve spotted plenty of lucrative trends before they hit the mainstream. For example, I made 15,000% from a blockchain mining deal as cryptocurrencies started to pick up steam… and I warned my readers to sell their bitcoin before the Crypto Winter of 2018.

Like I said, it was my grandpa who taught me the concept of stocks – that you could own part of a company and share in the profits without showing up to work there every day. To my 8-year-old self working in my father’s furniture store, this was fascinating.

I remember going out to get the newspaper in the morning to check on stocks. I would always look for the “Bs” to find BB&T Bank, because its headquarters was in my hometown at the time. I knew my grandfather sat on the bank’s board, and I wanted to know what the stock was doing.

That was where it all started.

But in 2008, we had a disagreement over the right move on a key stock…

Time to Get Out

We both looked at the company as a long-term holding. My grandfather had stocks in many companies. And usually held them for a long time. He taught me that that’s the secret to wealth. Let the business grow. Trading in and out of stocks too frequently meant missing out on that powerful wealth-compounding effect.

But I started to get nervous. I had concerns that the annuity business that LNC was getting involved in would turn south… and cause shares to plummet.

I made a gut decision. I called my broker on a Monday morning, just before the stock market opened. I told him to sell my shares of LNC at the open.

He said, “Are you sure you want to do this?” I told him yes.

He wasn’t the only one who doubted me. So did my grandpa.

I called him up and told him I was going to sell LNC. That was when he called me crazy. He told me we had a huge capital gain from Lincoln National buying the smaller company, and now I would have to pay taxes on that if I sold the shares now.

This was the toughest part. I wanted to listen to my gut, but my grandpa wasn’t making me feel super confident. It was tempting to just go along with the flow.

But I didn’t. What happened next proved I made the right call…

Don’t Be Part of the Herd

My broker sold the LNC shares at $54 at the market open, and I pocketed over 80 grand.

Check it out below… 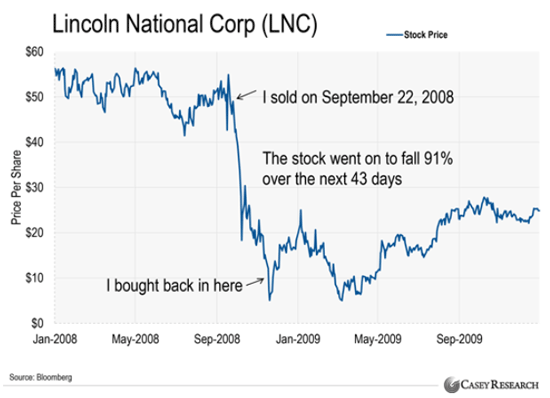 But I didn’t waste time patting myself on the back. After LNC crashed, I bought back more than 1,700 shares. I even increased my original position by 16%. And all told, I saved more than $80,000 from being wiped out by the market, which I then used to buy up assets on the cheap.

It was tough to make that call. Not only was I going against the popular sentiment, but I was ignoring the advice of a trusted family member.

However, going against the herd, and being an independent thinker, is absolutely critical to investing…

Human beings naturally want to behave like cattle. They want to follow someone no matter what. And the whole time they’re following that someone, they think to themselves, “I’m an independent thinker. No one tells me what to do.”

It’s difficult to fight that instinct to belong to a group. But you often have to if you want success as an investor. It’s how I’ve managed to make some of my best calls. And learning to do this is how you get on the path to achieving financial independence.

P.S. If you really want to break free from the herd – you need to do more than just buy stocks.

I urge you to consider investing in “Omega Shares.” They’re a unique type of security that you’ve probably never heard of… but they can deliver triple-digit gains like 136% and even 721%… in less than a year.

And you can often buy these “Omega Shares” for less than a dollar.

On Wednesday, February 5 at 8 p.m. ET, I’ll tell you everything you need to know about “Omega Shares” during my Explosive Profits Summit.

And I’ll show you how to get in on these gains immediately. Just go right here to reserve your free spot.