Sentiment’s so bad that The Vanguard Group—one of the world’s biggest money managers—is overhauling its gold fund. Not only that, speculators are shorting (betting against) gold more aggressively than ever before.

Regular readers know what I’m talking about. I laid this all out in the August 28 Dispatch.

I need to repeat a critical point of that essay. This sort of bad press sends investors running for the hills. And it keeps other investors from wanting anything to do with that asset.

That said, we’re not gamblers. We only make bets when the odds are stacked in our favor.

And one way we do this is by waiting for not just one buy signal… but several.

And we have that with gold right now, despite all the bad press that’s out there.

Today, I will tell you one of the biggest reasons to be bullish on the yellow metal… and how to play the coming rally.

You see, I’m not the only Casey analyst who sees a big-time contrarian opportunity shaping up in the gold market.

Now, people make calls like this all the time. Often, it’s just noise. And you should tune it out.

But this isn’t one of those times.

You see, Dave is our in-house commodities expert. He has more than 20 years of field experience in the mining industry. He’s also founded his own mineral exploration and development companies… and raised over $80 million in capital from some of the most well-known resource investors in North America.

In short, Dave is a true industry insider. And he sees something that the average investor is completely unaware of.

He wrote in the latest issue of International Speculator:

One private company I know just raised $8 million for a slate of gold projects in Africa. The assets are in the exploration stage, and the company isn’t trading yet.

Seeing that kind of enthusiasm amongst the industry’s inner circle—at a time when general sentiment is so low—is a critical sign.

Of course, that’s just one example. But Dave says there are a lot of deals like this happening behind the scenes.

This tells us that the real “smart money” hasn’t thrown in the towel on gold like the typical investor.

And that’s yet another reason for contrarians to be bullish on gold. But get this…

Here he is again:

These are big-time deals.

• Not only that, this could point to a big-time rally in commodities…

To understand why, look at the chart below. It shows “money flows” into the mining sector going back to 1990.

The blue bars represent the total amount of cash that flowed into mining investments each year—through equity financings as well as industry mergers and acquisitions. 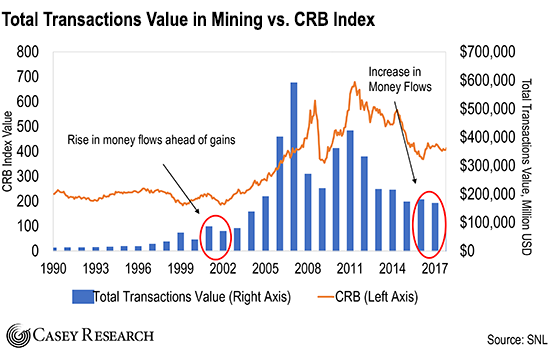 You can see that money flows picked up during 2001 and 2002. Cash started pouring back into mining companies, even as the commodities markets were falling.

For two years, insiders increased their purchases of mining investments. Then, commodities markets came roaring back to life in 2003. By 2008, the CRB index was up 250% from its 2002 low.

You can see money inflows fell steadily between 2011 and 2015. But the trend reversed in 2016 when cash inflows picked up for the first time in years. In 2017, money flows held steady. And now, based on what we’ve seen so far, it looks like money flows will tick higher in 2018.

If that happens, Dave says commodities prices should head much higher, too. He’s so confident of this that he believes “the strongest commodities bull market of all time” has begun.

To take advantage of this big opportunity, we recommend betting on gold mining stocks. The easiest way to do this is with a fund like the VanEck Vectors Gold Miners ETF (GDX).

For other ways to play the coming commodities boom, I suggest you read some of Dave’s recent essays on this topic. Here are three good places to start…

P.S. And make sure to check out Dave’s brand-new video presentation right here to learn about another major story he uncovered…

It’s called “Brandt Oil,” and it’s quickly becoming the new oil standard. And it’s opening up an opportunity to bring incredible wealth to you and your family—but only if you get in at the ground floor stage we’re at now. Click here to get all the details.

Today, a question from one of our readers…

Dear Casey team, is there any chance that we can expect some attention for the uranium market? Looking forward to your reaction.

Justin’s Reply: Thanks for writing in, Paul. We’ve been covering the opportunity in uranium stocks throughout the year. Make sure to catch up on our recent essays here:

We also will be featuring an exclusive interview on uranium with Doug Casey, Nick Giambruno, and Rick Rule in the coming weeks. Stay tuned…

Also, if you’re itching to ask your favorite Casey experts a question, sign up for the first-ever Legacy Investment Summit in Bermuda.

There, you’ll have the chance to ask all your most pressing questions in person—it’s an opportunity you won’t get anywhere else.

Have you seen these strange-looking metal poles in your city?

Most people have no idea what they’re for. But in just a few short years, these towers could completely upend the entire $479 billion smartphone industry… and make well-positioned investors rich. 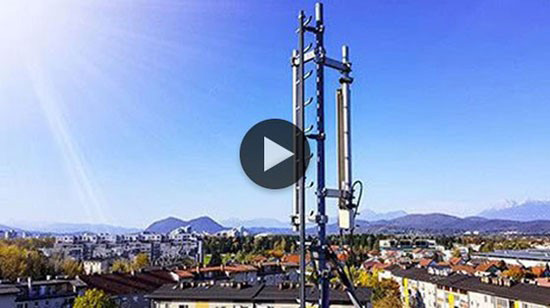