Are you ready for a test?

What are the two things (the only two things) that move markets?

Have you got it?

We wrote about it on June 1.

The answer is below…

If this is your first time reading the Dispatch, welcome. If you’ve tuned in before, welcome back.

We do this by showcasing ideas from our in-house investing experts, such as Dave Forest, Nick Giambruno, and the founder of our business, Doug Casey.

Today, we continue to watch the energy market – oil in particular. But first an interlude, as we consider yesterday afternoon’s wild market action.

The two things that move markets are:

There are no exceptions.

For proof of that, look no further than yesterday.

At 2 p.m., the Federal Reserve released its latest statement and projections. It informed investors that interest rates would one day rise.

According to the Fed, that day would be sometime in 2023. For the benefit of the numerically challenged, that means as soon as just over 18 months from now.

But as it turns out, even that’s too soon for the market. 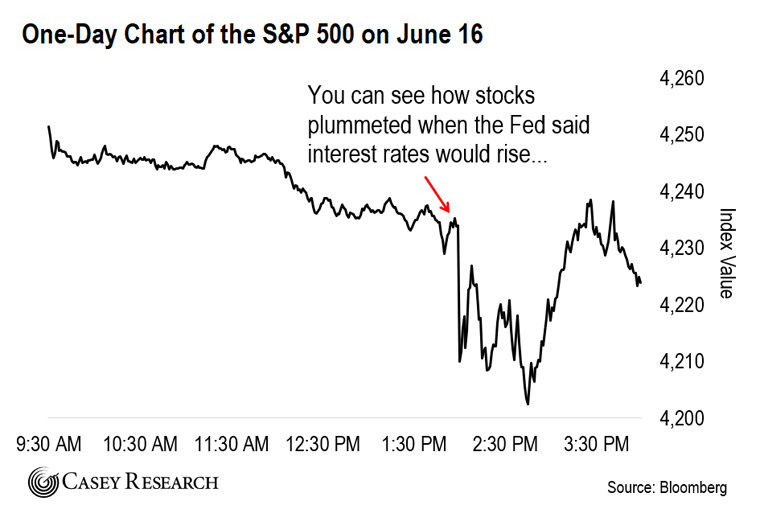 It’s clear on this one-day chart exactly when the Fed released the announcement.

The story behind it is that the Fed thinks inflation may be a little too high by 2023. Not now, but then.

So any inflation you see in the market today, well, don’t worry about it.

Naturally, Fed Chairman Jerome Powell (perhaps after seeing the market’s reaction to even the potential for a tiny increase in interest rates), told the market not to worry.

Federal Reserve policymakers on Wednesday delivered a surprise by signaling two interest rate hikes by the end of 2023. But Fed Chairman Jerome Powell downplayed those forecasts as anything other than speculation.

There you have it. It’s the equivalent of a financial markets hug – “Don’t worry, everything will be fine.”

It had the desired effect, as the market rebounded from the daily lows. And so, now that we’ve written off any chance of an interest rate rise anytime soon… we return to our subject of the week.

Because frankly, despite what the Fed may forecast, nothing has changed…

The Biggest Investors on Earth Are Buying

We consider the Fed’s projections to be nothing more than another “thought bubble.” It’s going through the motions.

As we noted last week, despite claims that inflation is only due to the recovery from COVID-19 shutdowns, prices have increased on grocery items for the past several years.

And we don’t see that slowing down. Even with the Fed’s fake threats to raise interest rates.

That’s why at Casey Research, we still like the oil story. Inflation is part of the reason why oil is going up. So is the continued demand for oil. And the attack on oil from activists.

So we don’t see any danger of the oil price falling.

Sure, just like stocks, the oil price wobbled in yesterday afternoon’s trading.

But by this morning, it was almost back to where it was before – safely above $72 per barrel. And it won’t be too long before it hits the next technical level around $77 per barrel.

But what about the fundamentals? We know technical analysis and fundamentals don’t always align. Has colleague, and investing expert, Dave Forest changed his view on oil?

We didn’t think it would be likely… not based on a single, frankly meaningless comment from the Fed. However, it’s our job to do our due diligence, and not to assume what our experts think.

So we placed a call to Dave’s home late yesterday afternoon to get an update on his position. He told us:

Nothing has changed. The real story is what’s going on behind the scenes, not in front of the cameras. And certainly not anything from the Federal Reserve.

When it comes to oil, we’re hearing one thing in the mainstream press: from smug activists, and from the alleged new breed of woke investors.

But behind the scenes, it’s the exact opposite. The biggest investors on Earth are rushing to buy oil companies.

Who wouldn’t want a piece of an industry facing an outlook like that?

We would. Dave would. And as he says, some of the “biggest investors on Earth” think the same way. It’s an intriguing story.

The “Golden Cross” Tells Us Oil Is Going Up

In Wednesday’s Dispatch, Kris showed you my analysis of the oil futures price action.

The technical analysis argues for strong continued price appreciation, and it is likely we close out the year around the $85 level. That would be almost another 20% of upside left to go before we see a more significant correction.

Whenever an underlying hard asset is trending, as oil is right now, there will be great investing and trading opportunities to go along with it.

As we look at the price chart, pay close attention to the “Golden Cross” that occurred at the beginning of this year.

(And the “Death Cross” is simply the opposite of the “Golden Cross”… it signifies a shift downward.)

What’s special about this “Golden Cross” is that it involves two longer-term moving averages. In February 2021, the 100-day average crossed over the 200-day average.

As a general guideline, a “Golden Cross” is more significant when it involves longer-term moving averages, exactly like what has happened in IEO.

Let’s look at the chart below. 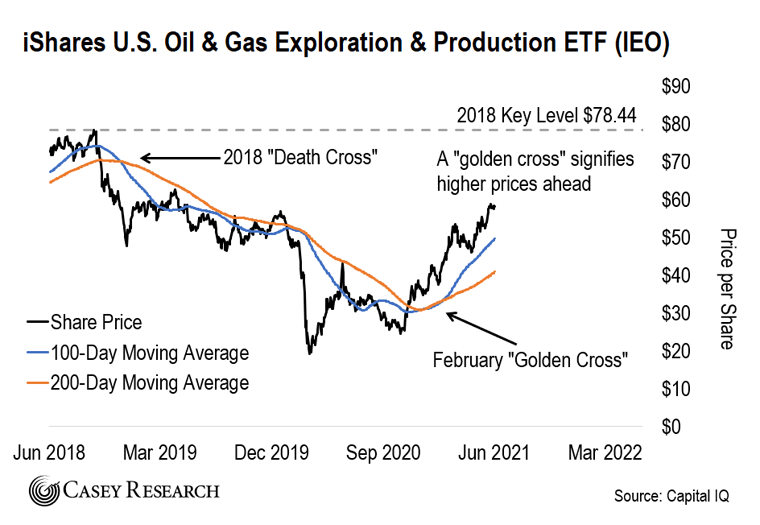 After this “Golden Cross” took place, IEO surged. It is currently up nearly 40% on the year.

If oil continues to perform strongly, as we expect here at Casey Research, then IEO will see continued upside as well.

Finally, take note of the 2018 “Death Cross” on the chart. The 100-day average moved below the 200-day average. The resulting decline didn’t bottom out until March 2020.

This is the power of these longer-term moving average signals.