I recently had a meeting in London with the retired president of a major Swiss bank. We talked about money for nearly three hours – what it is, what it’s worth, and where it’s headed.

He told me something interesting. He said he’s friends with most of the world’s notable central bankers. And there’s one word they wish you’d never heard in your entire life: gold.

That’s because it’s the common man’s only defense against the state’s power to create, value, or destroy currency by decree.

And in America, those in charge are abusing that power right now.

The Federal Reserve is in the middle of a radical money experiment that’s tampering with the value of the U.S. dollar… But it’s starting to lose control.

This can only go on for so long. Once it ends, the dollar won’t function as a standard of value anymore. And with the dollar now acting as the world’s reserve currency, that means the value of everything will be at risk when the Fed’s experiment finishes.

Which means we’ll need a new alternative to value assets.

Below, I’ll explain why gold fits that role perfectly… and why it’s important to get positioned before the Fed’s experiment ends…

Using Nature as an Intermediary

To understand what’s happening today, we have to go back to the past… when trading dominated the ancient world.

Back then, when you arrived in a new land, you needed something to sell – like gold – to start a new life.

Buyers and sellers found a way to avoid cheats and thieves looking to sell things for more than their actual value: They relied on nature as a trusted intermediary.

Across the Middle East and Mediterranean, there are carob trees – also known as locust trees – which produce a seed pod that looks like a dried-up snow pea pod.

Inside the pod are small brown seeds. Strangely, every seed weighs exactly the same. Pick any pod from any carob tree in any part of the Mediterranean, and its seeds weigh 200 milligrams each. 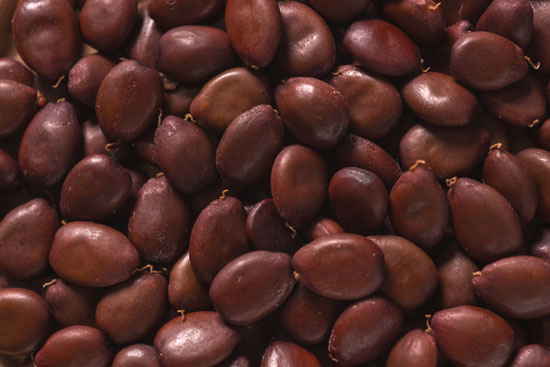 A batch of carob seeds

Using a balance scale, a local shopkeeper could verify a transient’s claim that he had one pure gram of gold to sell. The gold went on one side of the scale, and 5 carob seeds on the other (5 seeds x 200 milligrams per seed = 1 gram).

So the carob seed became the standard for valuing and trading precious materials. Over time, the carob system became “carat,” and it morphed into the “karat” system for valuing gold. Both systems are trusted methods of determining fair value in trades in which buyer and seller both have an incentive to cheat.

I’m telling you this because America used a similar system… when the dollar was pegged to gold.

At the end of World War II, world leaders gathered at Bretton Woods in rural New Hampshire to sort out the flow of world trade in the years ahead.

They decided the dollar would be the world’s reserve currency. That meant it would maintain a stable value, allowing lesser-developed countries to trade with each other.

This was a critical tool in rebuilding after the war, since the currencies of war-ravaged countries typically have little value. Stronger countries would balk at accepting devalued money from a weak nation. However, the two nations could settle the bill in the dollar, knowing it had a fixed value.

Foreign governments could also exchange 35 U.S. dollars for one ounce of gold. The Treasury would keep this “gold window” open to create financial stability. This in turn created trust between parties. If they couldn’t trust each other, at least they could trust the dollar.

With a trusted intermediary, trade flourished. The economy boomed. Most of the world’s economies grew.

For almost a century, the U.S. dollar acted as the world’s modern-day carob seed. But while nature kept the carob seeds’ weight regulated, the U.S. eventually abused its position as controller of the world’s currency. It couldn’t help itself…

U.S. government spending in the two decades following the Bretton Woods agreement surged. It started slowly, then picked up pace. Between social spending and the war in Vietnam, the U.S. spent far more than it received in tax revenue.

Furthermore, in August 1971, President Nixon closed the gold exchange window. Since then, the dollar now has value by decree only… making it “fiat” money.

What started in 1971 as money-by-fiat seemed to work fairly well. But in the early 2000s, the Fed figured out that increasing the supply of dollars shortened recessions. 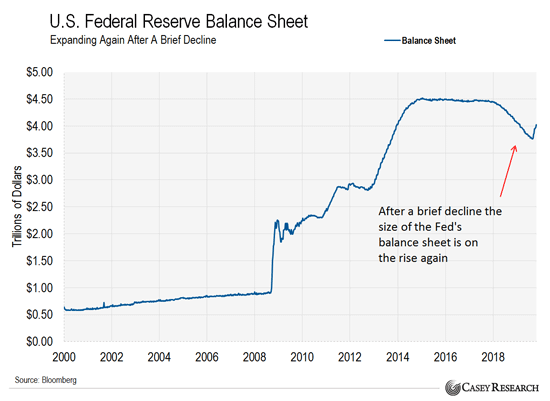 Small periods of decline create pain for the economy. Once you get a taste for limitless quantities of free money, it’s hard to go back to real economics.

Years ago, we had regular business cycles. This meant years of growth followed by small periods of correction.

Economic corrections are normal. When good times run on, people get more comfortable with risk. But over the last 20 years, the Fed pumped money into the U.S. economy to soften the blow of recessions, essentially to abate the natural corrective phase of the business cycle.

That means it flooded the system with money even during the boom years. And when it has tried to withdraw that “excess” money from the system, politicians and bankers cried out for help.

In the chart showing the Fed’s ballooning balance sheet above, you’ll notice a recent uptick. I think that’s a sign there’s more money-printing to come.

At the same time, gold made a similar uptick. After spending six full years in a crippling bear market, gold came to life over the summer. With little press attention, gold quickly shot from $1,270 an ounce in early May to nearly $1,550 an ounce in early September. I expect next year, it will rally even higher – breaking its all-time high of $1,900 an ounce. 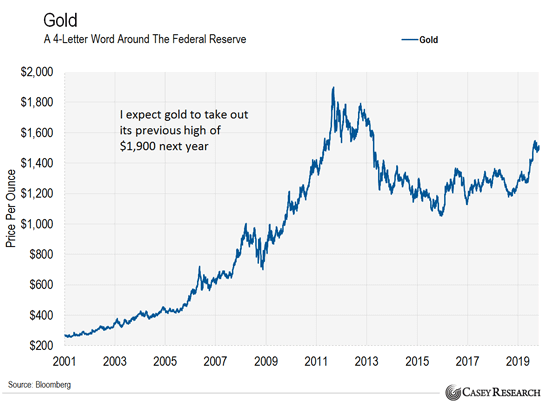 Gold is the carob seed of modern times. Science hasn’t figured out how to mass-produce it. It has inherent value in every inhabited region of the world. And it has no natural perils.

If you don’t own any gold today, now’s the perfect time.

You can start with common 1-ounce coins like the ones offered here by Gainesville Coins.

There’s a reason my Swiss friend said that if central bankers had their way, you would have never heard the word “gold” in your entire life.

That’s because gold is a tangible asset that you can hold in your hand. It’s real money, a safe-haven asset, and a way to protect your wealth. It’s survived every financial crisis and will continue to do so.

That’s because I just discovered a little-known anomaly that has the potential to rack up gains as high as 52,900% starting in January. It’s even more explosive than gold miners or royalty companies.

You can watch me explain it all in this special online presentation. And I’ll even give you my top pick… 100% free. No strings attached. Go here to watch it.