Rachel’s note: Today, we’re handing the reins to our friend at The Daily Cut, Chris Lowe. He’s a fellow gold bug and contrarian. And recently, he spoke to Casey Report chief analyst Nick Giambruno about the escalating War on Cash. (If you missed that, you can catch up here and here.)

Today, Chris sheds light on another frightening trend… and how it will create a permanent government database for the feds to track…

And as Nick says, this trend will only gain momentum as the talking heads in Washington carry out their underhanded cash grab on everyday Americans…

If you haven’t seen Nick’s urgent briefing yet, you can access it here… and learn how to protect yourself today. Then, read on below to learn more about the feds’ sinister plans…

Time is running out…

The government is about to replace the cash in your wallet with a new, digital-only dollar.

This will be based loosely on bitcoin.

And it won’t be Citibank, or Wells Fargo, or JPMorgan Chase that issues these new dollars.

It will be America’s central bank, the Federal Reserve (or Fed).

Casey Research founder Doug Casey calls this new, digital-only dollar “FedCoin.” And as he and his chief analyst, Nick Giambruno, have been warning, it’s going to be a disaster for your privacy… and your wealth.

It’s also going to trigger the mother of all rallies in our favorite decentralized currencies – bitcoin and gold.

Today, I’ll show you how the Fed will not only issue a crypto dollar… but also make sure Americans use it.

But first, it’s important you have a clear picture of how FedCoin will work… and why it’s so dangerous.

FedCoin Will Give Government Godlike Ability to Track Wealth

Physical cash gives you anonymity because it’s offline. When you transact with dollar bills, only you and the other party have to know about it.

But the only way to spend, receive, and store FedCoins will be via an app on your smartphone.

And all transactions will be recorded in a centralized government database.

That makes FedCoin a sort of anti-cash.

Everything you do will leave a permanent record for the feds to monitor and track.

And the feds won’t just be able to snoop on you. They’ll also be able to block you from making certain transactions. As Doug has written…

If I’ve got a $100 bill in my wallet or a bunch of 10s and 20s, I can spend them on anything I want with anybody I want and nobody knows. With blockchain… [the feds] know exactly who’s getting the money and what it’s being spent for.

And it can be programmed so that certain transactions can’t take place. So you are pretty well blocked in. [T]he government knows exactly what you’re buying, what you’re selling, how much you are earning.

They’re in complete control; able to take what they want… including your entire account if you become politically undesirable.

It’s a totalitarian’s dream, in other words. Imagine what Nazi Germany’s secret police, the Gestapo… or the KGB in Russia could do with that kind of information.

Central banks in Japan and Europe have set negative interest rates. And although he claims it’s not on his menu of options right now, there’s nothing stopping Fed chairman Jay Powell from doing the same.

The only problem right now is the feds can’t charge a negative interest rate on physical cash that’s in your possession… only on the digital dollars you store at a bank.

FedCoin slams that escape hatch shut. It will be under full control of the Fed. They’ll be subject to whatever negative rate it sets.

All central bankers will have to do is hit “delete”… and your digital dollars will disappear.

You may be skeptical about this nightmare ever becoming a reality…

But central bankers around the world are getting on board.

As Bloomberg reported, in June 2016, central bankers from about 90 countries met with bitcoin experts behind closed doors in Washington, D.C.

Delegates from the International Monetary Fund (IMF), the World Bank, and the Bank for International Settlements (BIS) joined them.

Janet Yellen, who was Fed chief at the time, opened the meeting. And the keynote speaker was Adam Ludwin, cofounder and then-CEO of Chain. It’s a crypto project working to bring the world’s financial system onto blockchain.

“The real golden opportunity, the thing you should be working toward,” Ludwin told the central bank luminaries gathered in D.C., “is a central bank digital currency.”

Support for These New E-Currencies Has Surged

That’s going by a new report from the BIS.

Established in 1930, the BIS is owned by 62 central banks from around the world. Together, the countries it represents account for 95% of the world’s economic output.

The best way to think of it is as a think tank for central banks. And it just put out a report that’s slipped under the radar of folks in the mainstream press.

The BIS tracked positive and negative references of FedCoin – what it calls central bank digital currencies, or CBDCs – in speeches by central bankers.

This revealed a massive shift in sentiment toward these digital-only currencies. Take a look… 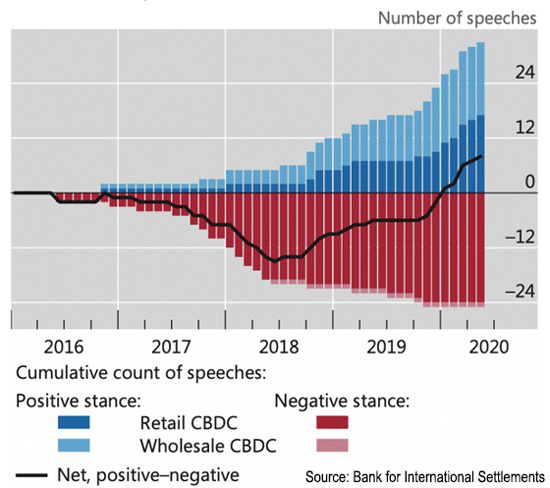 As you can see, positive references have started to surge as of late last year and into 2020 (blue bars on the right).

Two of Asia’s largest economies have begun rolling out CBDCs…

A senior figure at the Bank of Thailand, the country’s central bank, confirmed it’s using a CBDC for transactions with some businesses.

He said the central bank is also studying rolling out a state-backed digital wallet available to the public.

And as I put on your radar back in April, China’s central bank, the People’s Bank of China, is piloting a CBDC program.

The company behind China’s Uber, Didi Chuxing Technology, has said it will let its customers pay with China’s CBDC.

Back in the U.S., Treasury Secretary Steven Mnuchin has chosen a very interesting hire for the role of chief operating officer at the Office of the Comptroller of the Currency (OCC).

That’s the bureau within the Department of the Treasury that charters and supervises banks. Here’s Nick with more…

The writing is on the wall. Cash will soon be a relic, banished to the dustbin of history. This means every detail about your financial and personal life will soon be in the hands of bureaucrats and central planners.

I know what you might be thinking… Surely, Americans will resist… Surely, they’re not going to allow Washington to take full control of their financial lives.

But don’t count on it…

It’s something Nick tackled head-on in his special report about FedCoin.

Below, he explains how the government will bribe folks to comply.

I recently ran across an IMF [International Monetary Fund] working paper. It suggested the Fed would encourage folks to trade in their cash by paying higher interest than they’d get at the bank.

And right now, that’s not hard. The average rate of interest on a checking account in the U.S. right now is 0.06%. So, maybe the Fed pays 1.5% on FedCoin deposits during the transition period.

At that rate, FedCoin would pay almost 17 times more than the average savings account in a commercial bank. Many Americans would happily comply for half that amount.

If persuasion doesn’t work, the feds have other ways to enforce FedCoin use. Here’s Nick again…

After the transition period, the government won’t ask anymore. They’ll take away the incentive and start using penalties.

They could tax cash transactions, for instance. They could also place an expiration date on paper currency beyond which it would be unusable. They could even go so far as sending you a “hazmat” bag in the mail and forcing you to turn in your paper currency.

I get it that this scenario seems far-fetched. But wheels are already in motion.

If this seems like a lot of information, don’t worry. Nick’s put together a full rundown of the monetary shock that’s on its way. It shows you exactly what you should do to protect your wealth before it’s too late. Go here to watch his urgent briefing now.