That’s a lot of ground. Through every step of this journey for the last several years, I saw signs pointing to one thing…

The biggest investment opportunity of our lifetimes: electric vehicles, the tech powering them, and the juice running them.

The world’s most powerful people got on this trend years ago. They’re “baked in the cake,” rubbing their hands together as they wait for the EV universe to explode.

I got into EV stocks a few years ago. It was clear trillions of dollars were headed into this space.

Those early bets paid off. Across my EV recommendations so far, the average gain is a satisfying 867%.

We’ve booked profits up to 2,805% on EV infrastructure plays.

Most investors don’t see stocks shoot up that much – and then keep going.

But that’s where the experiences above are critical.

The world’s largest investors aren’t selling their EV positions. Many of them aren’t even booking profits yet – despite early investments soaring.

They’re all in. In fact, many of them are buying more. As I write, news just hit the wire of another billionaire taking a big chunk of an EV firm.

The world’s richest people are accelerating their EV investments. They’re creating more ways to get into this sector. Robert Friedland, the billionaire who invested in some of my early ventures, just listed a new battery company on the New York Stock Exchange.

The sheer number of ways to profit from the EV revolution is staggering. Most investors still only know the vehicle makers like Tesla.

Few have thought of charging stations…

… Hard tech needed in every single EV on Earth…

… Next-generation electricity grids to handle all the juice EVs need…

The list goes on and on. It’s a universe of profits, lifted by trillions of dollars flowing into everything EV, everywhere around the world.

In the first part of my series this week, I drew a simple diagram of the profit opportunities in this universe. 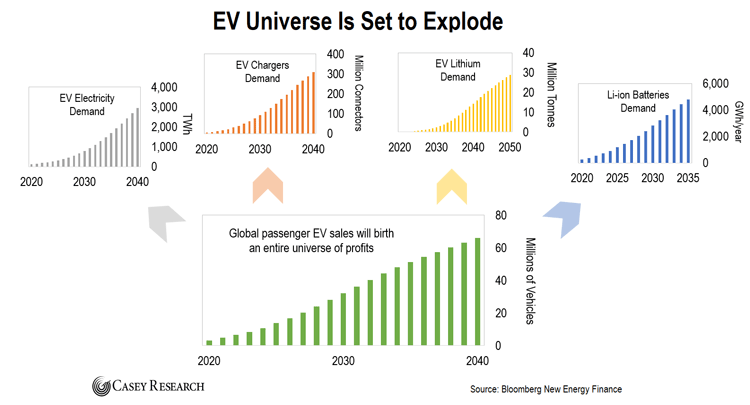 But I’m afraid I oversimplified it. 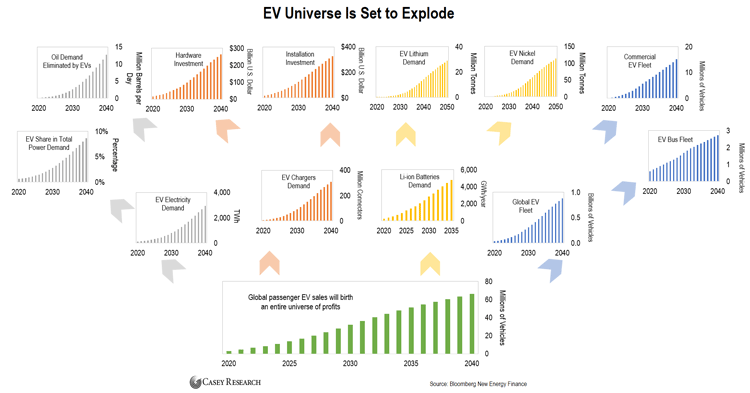 Layers upon layers of profits. Each trend is giving birth to four more sub-sectors. Each one is going to see unparalleled growth over the next few years… and probably the next few decades.

I put my time and money where my mouth is. I drove a Tesla across America to see exactly where we’re at in the EV space.

I found the trend well in motion. But there’s an incredible amount of room to grow. If you didn’t see the photos of my midnight Tesla tow, let’s just say… I’ll be very glad when more charging stations hit West Texas.

Something else happened on that cross-country journey.

I retraced the places America’s highways were born, way back in the 1920s. I visited the historic routes the first automobiles traveled.

Back then, the car was just a novelty to most Americans.

Few saw just how big the car would be. Just how much driving would be woven into the fabric of every aspect of modern society.

Those who got it made fortunes. Not just automakers like Ford and GM. Investors reaped massive gains in tires, repair shops, roadside motels, diners, hard assets like steel and oil, and thousands of other spin-off businesses.

An all-in wave like that hasn’t risen again since.

EVs touch nearly every aspect of our modern existence. The stakes for the winners are almost impossible to count.

That’s why I put this series together this past week. I want to show you what I’ve seen.

Don’t miss this one. On Wednesday, March 2 at 8 p.m. ET, I’ll show you why – whether you’re a billionaire, a retiree, or a new investor – this is going to be a play for the ages that you can’t afford to miss out on.

P.S. This opportunity is enormous. But most investors are looking to profit in exactly the wrong places.

You’re not going to win with Tesla… Rivian… or any EV maker. What you need to get in on are All-In EV plays.

And I’ve pinpointed a tiny one – essential to every EV – that’s set to make 49 years’ worth of gains in just one year.

The best part is it only costs three dollars to get in. A tiny stake in this company could change your life, so make sure you reserve your slot right here…

I’ll tell you everything you need to know on Wednesday, March 2 at 8 p.m. ET during my EV Superboom Summit.