The trade war is heating up.

Just turn on the television. It’s on every channel.

Of course, many people (wisely) choose to tune out the mainstream media. So let me bring you up to speed.

China didn’t take this lightly. It responded by slapping tariffs on $60 billion worth of U.S. goods.

In other words, the trade deal talks with China seem to have fallen apart.

Tariffs, which are basically taxes on foreign goods, interfere with trade. They make buying goods made in other countries more expensive.

Just look at this chart. It shows the performance of the S&P 500 over the last three months: 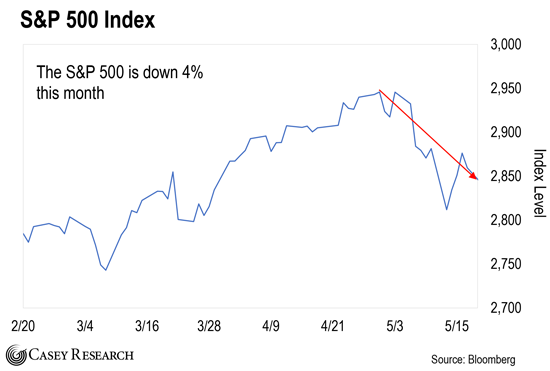 It caught many investors by surprise… including myself.

• You see, this bull market in stocks has been incredibly resilient…

It’s rallied in the face of everything… including weak economic data.

The U.S. housing market is also hurt. In fact, existing home sales have now fallen 14 months in a row. Last month, they plunged 4.4% year over year.

I could go on and on.

My point is that, until recently, this market was shrugging off bad news like it’s nothing.

It got to the point where many people, including myself, thought the average investor was being complacent… or even reckless with their money.

Of course, it’s hard to argue with results. And holding stocks through bad news has worked incredibly well in recent years.

• After all, investors can only overlook major red flags for so long…

For the first time in years, investors are actually taking bad news seriously. This tells me we could be seeing a major shift in investor psychology.

Of course, you should never operate (or trade) off feelings alone. That can end in disaster.

So it’s important to consider other indicators and signals to figure out what’s really going on. Or better yet, listen to what other smart people are saying.

Luckily, I work with many brilliant investors…

• Jeff Clark is one of those people…

If you’ve been reading the Dispatch, you know Jeff’s a world-class trader.

Some of Silicon Valley’s wealthiest people have entrusted Jeff with their money. In fact, he used to manage an account worth $20 million. Another was worth $30 million. That’s serious money, but Jeff helped make these people millions of dollars in profit.

Jeff was so successful at this that he retired at age 42 to spend more time with his family. But his retirement didn’t last long.

And this service has been incredibly successful for a simple reason.

• Jeff can make money in any environment…

It doesn’t matter if the market’s moving up, down, or sideways.

But he really excels during sell-offs, crashes, and full-blown crises.

For instance, Jeff made 10 times his money on the Friday before Black Monday… He made tens of millions of dollars on a single position on March 2, 2000, just eight days before the dot-com bubble popped…

And he made a killing during the last global financial crisis.

Just look at this chart that he shared with his readers last week… It shows the performance of the S&P 500 over the past year:

When I saw this chart, I knew I had to share it with you… for a couple reasons.

One, most investors have the bulk of their wealth tied up in large U.S. stocks. The other reason was Jeff’s description of this chart. He called the pattern you’re looking at “ominous.”

In technical terms, this is called a “double top” pattern, with the first top forming last September/October, and the second top forming this month. Typically, the two “tops” are separated by a decline of anywhere from 10% to 20%.

This is a bearish pattern that can indicate the reversal from a bull trend to a bear trend. So it’s worth paying attention to.

That’s the red line in the chart above. You can see that it’s sitting at around 2,800.

Yesterday, the S&P 500 closed at 2,840. So it’s dangerously close to breaking its critical support.

If it does break below this level, Jeff says investors could be in “big trouble.”

To understand why, look at this other chart that Jeff shared last Wednesday. It shows the S&P 500’s performance during 2007:

Here’s another chart that Jeff shared on Wednesday. This one shows the S&P 500’s performance during 2000:

But here’s a quick recap just in case.

Now, it’s too early to say if the same thing will happen this year. But Jeff says, “Investors are going to be in for some pain later this year” if that happens.

So be sure to take precautions if you haven’t yet. Here are a couple simple ways to do that:

Hold extra cash. This will cushion you against big losses should stocks keep falling. It will also give you dry powder to buy stocks when better opportunities present themselves.

Own physical gold. As we often point out, gold is real money. It has preserved wealth for centuries because it’s a unique asset. It’s durable, easily divisible, and easy to transport. It has also survived every major financial crisis in history. This makes it the ultimate safe-haven asset.

• I also encourage you to tune in to Jeff’s live event tomorrow at 8 p.m. ET…

As I said, Jeff says a major crash is around the corner. And those who act now can save their entire portfolio. In fact, if you know what you’re doing, you can potentially make life-changing gains.

Not only that, Jeff will share a five-minute shortcut to using the technique he’s been using for 30 years, which could help you double your money… 10 different times… as the crash unfolds.

This is a must-see event for all Dispatch readers. Make sure you reserve your spot right here.

Readers write in with praise for Doug Casey’s recent interview warning of the Democrats’ “freak show”:

Great essay, Doug, which I intend to send to all my now-adult kids.

I believe that our nation’s direction can end in only one way – dissolution, but this time without the wild murder and mayhem that accompanied the first attempt.

The invasion across our mainly southern borders likely will provide the spark that will ignite the fire. Our nation was founded as a Euro-white nation – all newcomers were expected and had no choice but to learn our language and adopt our ways. Some could not and eventually return to the old country, including my old grandfather, who left late in life and eventually croaked there.

The idiotically suicidal mantra that “Diversity is our strength” is literally tearing our nation apart. Certainly, diversity in talents, skills, interests, and preferences is essential to any advanced and functioning society, but diversity in basic moral values, sometimes even in religious beliefs, is looking for, and often finding, big trouble. Always look forward to and enjoy your columns.

You made a lot of good points in your interview. The British sent hundreds of thousands of white slaves to North America in the early days of European settlement. One of them was an ancestor of mine. Many free blacks in the South became slave owners themselves.

The New Bedford Whaling Museum website describes the hideous working conditions aboard the Yankee whalers. After reading Time on the Cross it is obvious to me that the Southern slaves had a better life than the working-class whites in the North.

Your comments on education were spot on. I want reparations for the two years that I wasted in college. Recently I became a Fellow of the Royal Geographical Society. I learned geography through the windshield of an airplane, not listening to soporific college professors.