Everybody there is talking about oppressive utility bills and how they’re being impacted by them.

And as we head into the winter, European politicians will have to ration gas and energy. Tough questions are already being asked, like which businesses get to stay open… and which ones must close.

But Europe’s energy crisis won’t remain contained to the region. It’s already spilling over to the global economy…

Today, Nomi will discuss why the crisis affects you, too… and tomorrow – on Wednesday, September 28 at 8 p.m. ET – she’s holding an urgent briefing to explain what’s coming and how you can prepare. Go here to sign up for free.

Utilities burning coal and firewood at an industrial scale…

And people setting their gas bills ablaze in public and on TikTok.

That’s the reality for millions of people living in Europe right now. And as I write this, they are bracing for the arrival of a long, cold winter.

I learned about their fears firsthand on a recent trip to England.

Everyone there is talking about oppressive energy bills and how they’re being impacted by them.

But this “European” energy crisis is not restricted to Europe. It’s spilling over into the entire global economy.

And as such, it has very serious implications for us on this side of the pond… and on our finances.

So today, in the first of a two-part essay, I’ll explore the main reason for Europe’s energy woes.

And tomorrow, I’ll show you why it affects you, too… and how you can counter the effects of it in your portfolio.

But first, let’s look at the main reason behind the energy crisis that’s raging in Europe right now…

One of the main factors driving the energy crisis in Europe is the rise in natural gas prices.

Europe loves natural gas. It gets about a quarter of its energy from it.

And what’s not to love?

It’s a superior form of fuel to oil and coal because of its energy density.

You can also use it to make fertilizer. And that’s crucial for the food production industry, as I wrote a few months ago.

Natural gas also produces less pollution than some other fuels. It emits about half as much carbon dioxide as coal, for example.

The upshot is that European nations wanted to move away from the dirtier, polluting fossil fuels, such as coal and oil, and, in some cases (think Germany), nuclear. So it had every incentive to fall in love with natural gas.

But there was a problem…

You see, there are two ways to move natural gas around. The first is by sea, using liquified natural gas (LNG) carriers.

This option requires an export facility to chill the natural gas down until it becomes liquid. It is then pumped onto these giant boats and shipped across the world.

Then on the other end, you need an import terminal to re-gasify it. All this infrastructure takes billions of dollars to make and years to construct.

The second option is much simpler. It involves transporting natural gas via pipeline.

Europe chose the easier way. It imported natural gas from Russia through pipelines.

Russia was right next door, after all. And it produced lots of natural gas.

From Nord Stream to No Stream

Up until recently, Russia was a major exporter of natural gas to the rest of Europe. Last year, the European Union (EU) got roughly 45% of its imported natural gas from Russia, according to the International Energy Agency.

The most important pipeline is Nord Stream 1. It’s approximately 1,200 kilometers long and runs under the Baltic Sea between Russia and Germany. Up to 170 million cubic meters of gas can flow through Nord Stream 1 per day.

Since it became operational in 2011, more than 441 billion cubic meters of Russian gas have flowed to Europe via Nord Stream 1.

Nord Stream 1 is owned and operated by Nord Stream AG, whose majority shareholder is the Russian state company Gazprom.

For years, Nord Stream 1 has embodied the tacit deal between Russia and the European Union.

Russia was willing to supply copious amounts of natural gas at favorable prices. It developed infrastructure to take its gas to Europe.

Europe built industries that depend on that cheap supply of Russian gas. And industrial powerhouses, like Germany, built their entire economies around it.

But then, earlier this year, Russia went to war with Ukraine. That changed everything.

The EU slapped Russia with unprecedented sanctions. Russia retaliated by cutting the flow of natural gas via Nord Stream 1 by about 60%.

Then during its annual scheduled maintenance this summer, the pipeline flow dropped to zero. When it came back online, it came back at 40% capacity, before dropping to 20%.

Then, at the end of August, Russia shut down the pipeline again, supposedly for maintenance. This shutdown was to last three days. But at writing, the pipeline remains offline.

Russia’s Endgame Could Mean Lights Out for Europe

As a result of all these actions, the European gas price went parabolic this summer. At one point, it cost $340 per megawatt hour (MWh). That’s 312% higher than in January 2022, before Russia invaded Ukraine.

You can see the huge spike in natural gas prices that coincided with the Nord Stream 1 shutdown in the chart below. 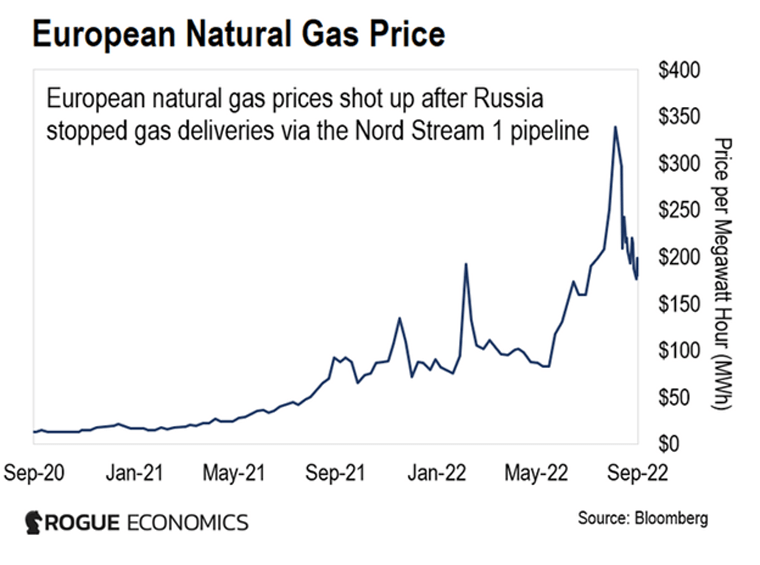 Now, while the price has dropped back somewhat in recent weeks, as Europe secures alternative supplies, the uncertainty surrounding their natural gas supply is a huge concern for the eurozone countries.

So, Russia’s endgame is simple – to keep gas prices as high as possible to inflict maximum pain on Europe so it eases off on sanctions.

The way things are going, it looks inevitable that Europe will have to ration gas and energy come winter.

Germany is already discussing its options. German politicians are trying to decide how German industries will be prioritized. Difficult questions are being asked.

Questions like… Who gets the gas when there is a shortage? Who has to close the shop?

But whichever way they slice it, it will likely end up plunging Europe’s largest economy into crisis.

And if that happens, the entire European Union – and therefore, potentially the entire world – is in trouble.

Tomorrow, in the second part of this two-part essay, I’ll show you how to turn rising energy prices into profits in your portfolio.

At my urgent briefing tomorrow, on Wednesday, September 28 at 8 p.m. ET, I’ll explain what’s coming and how you can prepare. I’ll show you a strategy to make up to 10 times your money as this becomes headline news.

Plus, for anyone who tunes in, I’m even giving away the name of one of my favorite stocks, which I think could become a blue chip over time.

Just go here to save your spot.