Rachel’s note: World energy and food prices are at their highest level in decades.

What’s more… the World Bank says global food prices will soar by more than 20% this year, and energy prices by more than 50%.

As a result, we could see empty shelves and food scarcity.

This might all sound grim… but you need to prepare for this crisis on the horizon.

Luckily, Nomi Prins – Casey Research colleague and financial expert – is hosting a special briefing next Wednesday, August 31 at 8 p.m. ET. She will do a deep dive into the energy situation… and what you can do to hedge your investment portfolio against what’s coming.

Sign up for free here. Then, read on for Nomi’s breakdown of rising global costs…

Get ready for an “energy shock…”

Experts predict it could happen as soon as this winter.

But if you know where to look, you can protect your portfolio – and profit.

I’m calling this event the Running on Empty Summit.

There, I’ll do a deep dive into the coming shock… and what you can do to prepare your portfolio.

Plus, I’ll share the details on a small – publicly traded – firm that could hold the key to solving a major problem in the energy crisis.

But first, some background. As you’ll see, this crisis could soon hit your wallet harder, in subtle ways you may not see coming…

Cracking Down on Russian Fuel

On June 3, the European Union adopted a partial embargo on Russian oil.

The sanctions will ban seaborne imports of Russian crude oil as of December 5, 2022. And they’ll ban petroleum product imports starting on February 5, 2023.

It’s all part of the EU’s harshest sanctions package against Russia up to this date. And that’s saying something…

The EU gets roughly a quarter of its oil and 40% of its gas from Russia. So this embargo could have a big impact on fuel supply and prices in Europe.

But it will also have a knock-on effect on fuel and energy prices globally. That’s because Russia accounts for 10% of the world’s oil. And it’s the world’s largest gas exporter.

Now, here in the U.S., energy prices are already up 33% year over year. That’s according to the July Consumer Price Index (CPI) data released by the Bureau of Labor Statistics.

If you look even closer at those figures, you’ll see gasoline is up 44% in the last year. And fuel oil is up 76%.

If the EU goes through with its Russian oil ban this winter, we can expect fuel and energy prices here to shoot even higher.

The World Bank expects global energy prices to go up more than 50% in 2022.

But that won’t just drive up the cost of filling your car or heating your home. Rising fuel and energy costs have much bigger consequences…

In fact, the amount you spend putting food on the table is also closely linked to the cost of energy.

And that means you may have to look for further cuts in your household budget if the EU bans go ahead. Here’s what I mean…

The Link Between Energy and Food Prices

When most folks think about fuel and energy price increases, they don’t think about the impact this will have on their grocery bill.

But food and energy prices go hand in hand. Take a look at the chart below. It shows global food and oil prices over the last three decades… 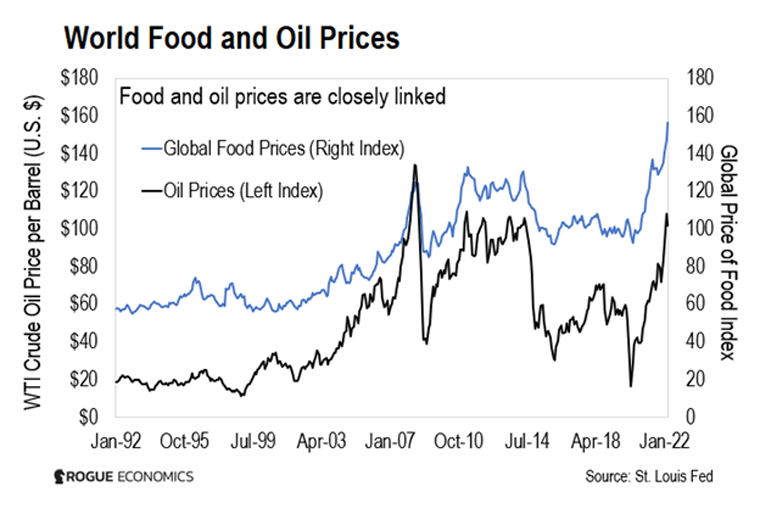 As you can see, the two are closely linked. In fact, over the last decade, they have moved practically in tandem.

And it makes sense. It takes energy – especially fossil fuels – to produce food.

You also need energy to transport food to the store. Trucks and trains run on diesel; planes run on jet fuel. There are millions of them crisscrossing the nation each day to get produce to the market.

So when energy prices go up, food gets both more expensive and less abundant.

Producers pass on their rising energy costs. Because of higher prices, consumers look for alternatives to cut down on their grocery bills.

In response, producers reduce their output – leading to shortages, which drive prices up even further.

That’s why when the price of energy rises, the price of food rises along with it. In fact, research shows that changes in oil prices can explain more than 60% of the variation in food prices.

Even before Russia’s invasion of Ukraine, prices were tearing higher as the world opened up after the 2020 lockdowns.

Remember, energy prices are already up 33% over the past year here in the U.S. And the cost of food is up 11%.

But energy and food prices have spiked even more since Russia started a war in Ukraine.

In fact, according to the United Nations’ Food and Agricultural Organization (FAO), world food prices are at their highest level in decades.

In this next chart, you can see they haven’t been this high since the mid-1970s… 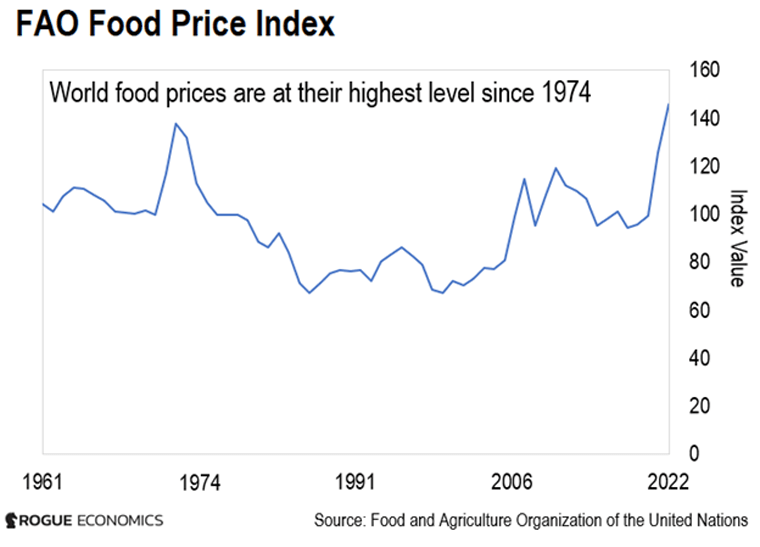 Let’s take a quick look at that historical context…

From Oil Shocks to Food Shortages

The fact that the last spike of this magnitude in food prices occurred during the oil crisis in 1973-1975 isn’t a coincidence.

That oil crisis began when the Organization of Arab Petroleum Exporting Countries (OAPEC) proclaimed an embargo on oil exports.

The embargo was targeted at nations that had supported Israel during the Yom Kippur War against the Arab states… most notably, the United States, Japan, and Western Europe.

The resulting 1970s Oil Shock knocked the wind out of the global economy. The price of oil went up nearly 300% globally. It set U.S. inflation soaring to above 11%.

Today’s parallels with the 1970s oil shock are unmistakable.

We have a war raging in a geopolitically important region. Oil is up 22% so far this year. Inflation in the U.S. is still out of control.

And thanks to the EU-wide oil embargo, things could get worse this winter. We could see substantially higher energy prices over the coming months.

And that will push up food prices, too.

Food Shortages on the Horizon

Today’s energy crisis hasn’t resulted in food scarcity or empty shelves yet. But those could be on the horizon.

Speaking at a news conference at the EU headquarters in Brussels recently, President Biden touched on the potential for food shortages.

He said that they are “going to be real… because both Russia and Ukraine have been the breadbasket of Europe in terms of wheat, for example.”

But it’s not just Europe that will feel the pinch…

The World Bank says food prices will soar by more than 20% this year.

Here in the U.S., the Department of Agriculture’s Economic Research Service says poultry prices are predicted to increase between 7.5% and 8.5% this year.

Dairy products and egg prices will go up between 6% and 7%. Fish and seafood will increase between 5% and 6%.

The war in the Ukraine is intensifying the raw material shortages and supply chain issues the world was already experiencing as an after-effect of the pandemic.

And considering we could see a deeper energy crisis this winter, food prices will likely keep rising throughout this year.

Now, I know this all sounds grim… especially if you’re also looking at your investment portfolio taking a beating.

That’s why I encourage you to tune into my urgent strategy session on Wednesday, August 31 at 8 p.m. ET.

At my Running on Empty Summit, I’ll do a deep dive into the energy crisis… and what you can do to prepare your portfolio.

Plus, you’ll get details on a small – publicly traded – firm that could hold the key to solving a major problem in the energy crisis.

P.S. This winter, as the full force of European sanctions against Russia kicks in, experts predict we will see energy prices soar globally.

Electric vehicles are one solution to this energy crisis. But what if you could eliminate fuel and gas costs altogether? That’s exactly what one small firm has discovered.

And right now, you could invest in this company for as little as $1…

On Wednesday, August 31 at 8 p.m. ET, I’m going to do a deep dive into the energy crisis… and what you can do to prepare your portfolio…

I’ll also give you details on the company I mentioned above, and show you how you can invest before the rest of the world catches on to its huge potential…

To reserve your spot for this free event, just go here.