About 100 years ago, one man found an unusual way to create wealth… and it turned him into the richest person in modern history.

His name was Andrew Carnegie. According to Money magazine, his wealth amounted to over $370 billion in today’s dollars. That’s about 450% more wealth than Bill Gates or Warren Buffett hold these days.

But Carnegie didn’t get rich the way his peers did. He didn’t control the big industries of the time, like cars, railroads, or banks. He was shrewder than that.

Instead, Carnegie focused on supplying the raw materials for each and every one of America’s biggest unfolding businesses by selling one basic, but indispensable, commodity: steel.

That meant he profited from automobile manufacturing, railroad construction, the expansion of cities, and a host of other sectors.

Imagine you could get a piece of the profits from all of the biggest markets around you – while at the same time, insulating yourself from risk. Because if a particular company or even a whole industry sours, you simply start selling to whatever sector rises in the void.

Imagine if we could find a “steel” that supplies all of the potential trillion-dollar businesses of our time – trends like advanced 5G communications, the Internet of Things, artificial intelligence, robotics…

And so much more.

Fortunately, raw materials are my life’s work. For over two decades, I’ve explored all of the world’s populated continents, looking for copper, gold, nickel, cobalt, and natural gas.

Looking at the explosion in new technology happening today, I asked myself – is there a single commodity, a building block, that will profit from all these new industries?

And after years of searching, I believe I’ve found one. It represents a chance to get in on the ground floor of not one, but several of the world’s largest tech megatrends with a single investment – the way Andrew Carnegie did to build the biggest fortune in modern history.

My research turned up an unusual commodity, one many investors haven’t heard of: lithium.

It’s critical for a lot of different sectors: ceramics for semiconductors and other applications, advanced lubricants for transportation, environmental technologies, even medical applications.

A very diverse range of industries depend on lithium. That got my attention. But then I saw a chart that vaulted lithium to the top of the list as a ground-floor way to invest in the tech boom…

You’ve undoubtedly heard about electric vehicles, or EVs for short. Electric vehicles are one of the biggest trends on Earth, having attracted the world’s top tech entrepreneurs like Elon Musk and Amazon’s Jeff Bezos. Musk’s EV firm Tesla went from rank start-up to a $150 billion valuation in just over 15 years.

The chart that put me over the top on lithium is linked to the EV sector. That’s because the electric batteries in nearly every electric vehicle are made from lithium.

Even as far out as 2040, year-over-year lithium use is expected to continue surging as more and more EVs roll out: 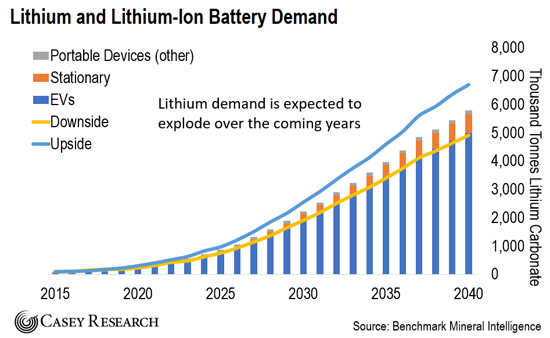 Even in the lowest forecasts for lithium use, demand from the EV sector is expected to explode by over 1,000% in the coming years.

Ever since I saw this chart, I’ve wondered if people like Andrew Carnegie were looking at similar figures when they considered the possibilities for steel in the late 1800s…

In fact, the situation in lithium today is very similar to steel in the 19th century. Back then, very few companies made steel. No one saw the potential. That allowed Carnegie to grab a near monopoly on the massive industry.

He had the foresight to see what was coming.

Just think – you’ve undoubtedly heard lots of talk about the EV industry. Your neighbors know all about it. But when have you ever heard them mention lithium, the lifeblood of this industry?

Probably never. Almost no one’s looked below the surface to see what’s driving this megatrend…

But the numbers clearly show what’s happening. For years, there’s been more than enough lithium in the world to meet demand. But starting in 2020, rising demand from the EV sector is expected to suck up nearly every pound of lithium we have on the planet.

Over the next few years, there simply won’t be enough lithium to supply the EV industry, plus all the other businesses that depend on lithium.

This deficit is being driven by the rise of new technology. EVs are one of the biggest trends reshaping society this century. The chart below shows how, by 2035, nearly half of all vehicles sold on the planet will be electric.

Every single one of those cars, trucks, and buses will need lithium. 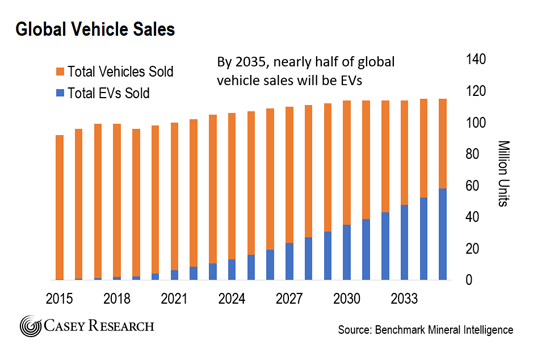 That’s why I believe this is such a massive opportunity. That’s especially true in America, where there are only a handful of companies positioned to feed the massive need for lithium in EV manufacturing, such as Tesla’s Gigafactory in the Nevada desert.

Right now, most of the world’s lithium comes from just a few countries. These are places you wouldn’t expect – they’re not at the top of anyone’s investment list. They include China, Argentina, and Chile.

This is a long way to go for lithium supply if you’re a U.S.-based company like Tesla, Ford, or General Motors. That’s a big problem, because America is the second-largest market on the planet for electric vehicle sales, after behemoth consumer China.

That means we’ll need to manufacture a lot of EVs in and around America.

And those factories will all need lithium – ideally, from a domestic source.

What the Future Holds

It’s important to look at the potential for profits if the lithium sector takes off the way I think it could.

Right now, we have rapidly rising lithium demand as EV manufacturing ramps around globally. At the same time, there’s great uncertainty about exactly where all that lithium is going to come from.

When demand overwhelms supply like that, it causes major price spikes. That’s one of the reasons such huge fortunes are made in commodities: when something fundamental changes in an industry, the resulting shortage can trigger sudden and massive surges.

Here’s what experts are predicting for the price of lithium. In places like China and Antofagasta, Chile, where the metal is mined, prices are expected to rise steadily until 2026. That means revenues, and likely profits, will go up for companies selling lithium. 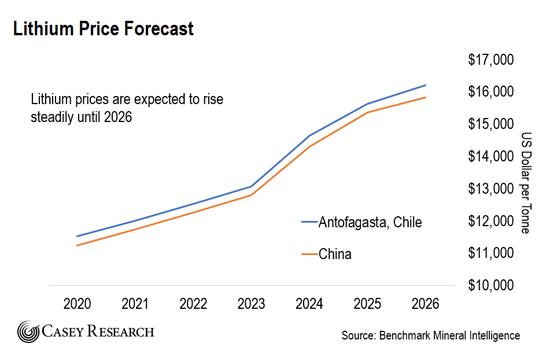 Imagine if sale prices for Apple computers suddenly increased 10%, 20%, or even 30% yearly. The resulting surge in revenues and profits would have analysts and Wall Street bankers falling over themselves to buy the stock.

The same thing will happen to lithium companies if prices go up the way the experts are forecasting. In fact, history tells us lithium stocks could rise much more than the lithium price itself.

In the period from 2015 to 2017, lithium prices rose sharply as EVs suddenly came on the map. You can see the lithium price in black in the historical price chart below. The red lines are share prices of lithium stocks. These stocks outperformed lithium itself by a wide margin. In some cases, lithium companies gained nearly 2,500%. That’s 25 times your money, or enough to turn a $10,000 investment into $250,000. 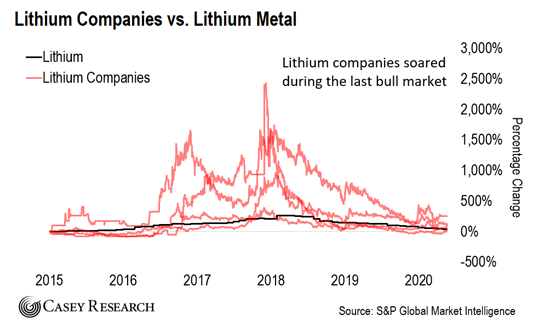 Back then, many of these lithium companies were working in far-away places like Argentina.

Fast-forward to today, and we know that EV demand for lithium in America is going to be some of the highest in the world.

That means we should be on the lookout for American companies poised to benefit.

My Strategic Investor subscribers got all the details on four picks set to soar (if you’re a subscriber, check it out here and here). However, out of fairness to my readers I can’t reveal those to you…

But if you’re looking for an easy way to take advantage of this opportunity, take a look at the Global X Lithium & Battery Tech ETF (LIT). It has investments in the entire lithium industry, from mining to battery production, and it should rise as lithium demand soars.

But remember, losing is a possibility with all investments. That’s why we recommend you never bet more than you can afford.

P.S. While mainstream investors are falling over themselves to buy tired, old name-brand companies like Tesla… we can make a much more lucrative bet on the driving force behind the tech boom.

And I just discovered a tiny company that few investors know about – and it’s sitting on a $35 billion prize.

I think this company’s on the verge of a multibillion-dollar deal with Tesla. And it could happen any day now. There’s no time to lose.

Go here to check out this breaking news… and find out how you could make life-changing gains in the months ahead.