Editor’s note: Today, we’re bringing you a classic story from our very own E.B. Tucker.

E.B.’s not just a successful investor. He knows the importance of getting away from your desk… and he’s gone on numerous adventures abroad.

That’s why we had to share his tale from Mexico again. Along with his analyst John Pangere, E.B. got a behind-the-scenes look at a tequila distillery… and winded up meeting a stowaway and an IRS agent.

You can find out more below…

I went to Mexico in February with Strategic Trader lead analyst John Pangere.

After spending a few days in the ritzy Polanco neighborhood of Mexico City, John and I headed for Jalisco state to check on one of his personal investments.

Prior to joining my team, John was working as an analyst focused on private investments. He worked on financing for a startup company that planned to import a new premium tequila from Mexico. He learned the tequila would be new to the U.S., but the family producing it was fourth-generation.

They called the product G4.

John and his father Ross got involved in the upstart distribution company as passive investors. Over time, they got more involved. They met the man behind the exceptional product and ended up taking over the entire business.

To be clear, John is not involved in producing tequila. He merely has the right to coordinate its distribution in the U.S. and Canada. In the U.S., that means choosing which distributor in each state will comply with the local laws and get the product behind the bar or on the liquor store shelf. If the product takes off, it can turn into an impressive royalty business with a remarkably low overhead.

And recently, John asked if I wanted to go down to rural Mexico and check on the distillery.

Of course I did.

We took an early flight into Guadalajara from Mexico City. The plan was to get out to the distillery and back to the airport in one very long day. In retrospect, it was somewhat ambitious.

Having been to almost every part of Mexico looking at gold and silver mines, I’m not at all afraid of traveling there. In fact, in all of my trips I have never once run into trouble. Most Americans cringe when you mention visiting the country. I will rent a pickup and head off to parts unknown without thinking twice.

We took off from Guadalajara heading north, then east, looking for a town called Arandas. Once we found it, we headed down a smaller road to Jesús María. After that, we hit a dirt road looking for the agave plantation.

Agave is the key ingredient in tequila. Besides water, it’s the only ingredient.

The plant looks like a giant pineapple. The core grows in the dirt, while the thick green leaves flare out above. Tequila makers only use the heart of the plant and discard the leaves.

I had seen plenty of pictures of agave plants. After George Clooney invested in Casamigos (which sold for close to $1 billion), tequila ads started popping up everywhere. The ads for premium tequila often show pictures of agave fields.

These big-flared agave plants shown in premium ads are deceptive. Bigger is not always better. Similar to grapes for wine production, the size of the plant does not matter. Weather, rain, and altitude all affect how the agave plant looks as it grows. Time in the ground also varies. Some growers harvest plants in just a few years, while others wait close to a decade.

A skilled tequila distiller knows to ignore the size, shape, and color of an agave plant and focus on just the sugar content. A fourth-generation tequila distiller, like the man pictured below, does it instinctively. 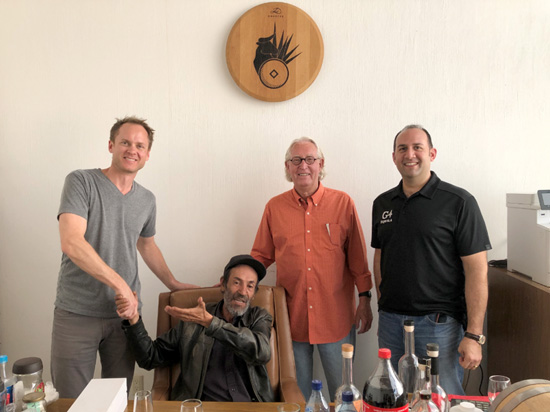 The first thing Felipe Camarena said to me when we met was, “Excuse me; I’ve been drinking a little since Saturday.”

…We arrived on a Tuesday.

Camarena produces tequila in the same region as his father and grandfather did. It’s in his blood… And he had a lot of it in his blood when we met.

The quality of a premium tequila rests solely on the distiller’s instinctive skill. As I mentioned, agave and water are the only ingredients. The rest is art.

I am not a drinker, so I didn’t know a lot about tequila when we arrived. I asked Felipe to arrange a full tour of his operation, start to finish. I wanted to see how the product goes from agave plant to bottle.

Tequila – From Plant to Bottle

The first step in the process is harvesting agave. The distiller is going for the optimal sugar content. Too young, too old, too large, or too small, and the wrong mix of agave can cheapen the process.

The agave arrive without leaves. Field workers remove those with a machete. Again, picture a pineapple without the leaves on the head.

Next, workers at the distillery use machetes to split the agave in half. 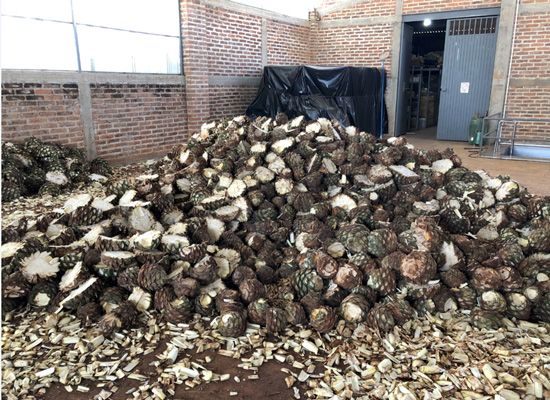 As far as the workers at the distillery, most speak English and have a technical background. These guys are very sharp. It’s part of what makes premium tequila stand apart from bottom-shelf junk.

The agave plant has very high sugar content. That sugar is what the distiller wants. To extract it, he has to cook the plant and then crush it, which produces a juicy syrup that starts the distillation process.

After workers split the agave in half with a machete, they remove the heart, which you’ll notice littering the ground in front of the split agave pictured above. This heart makes the product bitter if it’s cooked with the rest of the plant.

With the agave plants split, workers load the halves into a stone cooking furnace. This is the traditional way to cook agave. Some mass-market tequila makers use an acid bath to extract sugars from agave. It’s faster and cheaper. If you’ve never had tequila, you wouldn’t know the difference. If you have, there’s no going back. 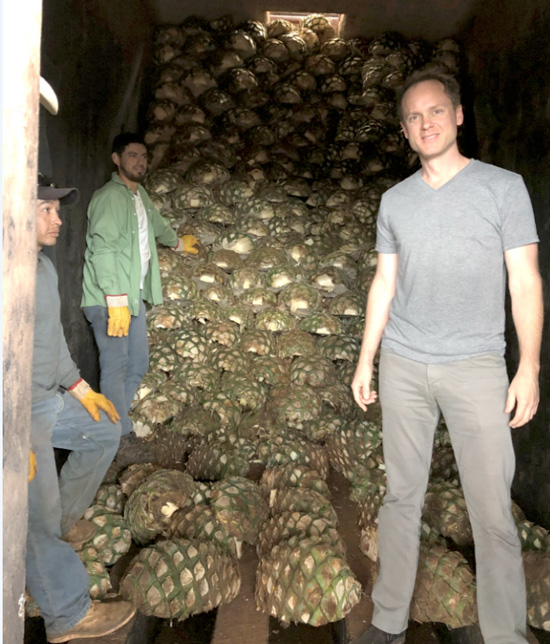 E.B. inside the agave oven

The stone oven I’m standing in holds 27 tons of agave. That’s about 24,500 kilograms… or over 54,000 pounds. Each 10 kilograms of agave plant loaded into this oven will ultimately produce about one liter of tequila. That means this fully loaded oven will turn into around 2,500 liters of tequila on the store shelf.

The cooking process takes two days. The first day is the actual cooking, with heat applied through the floorboards below. You’ll notice (in the photo above) the plants are strategically packed so that warm air can circulate through them. The second day, the agave sit in the oven without heat, which allows them to cure.

After two days in the oven, the cooked agave go into a stone pit that looks like a small loading dock. A homemade steamroller crushes the cooked agave, sending the sugary extract into a fermentation area.

It’s All About the Water

Tequila is essentially fermented agave and water… But not just any water.

Felipe Camarena uses three sources of water to make his tequila: rainwater, spring water, and deep well water. He wouldn’t tell me how much of each, but I gathered he mixes on instinct, not formula.

The agave and water mixture heads to fermentation tanks for five days. Then, it goes into a still.

The still hasn’t changed much since people made hooch in the woods during Prohibition. The copper pots shown here have a copper coil running through them that looks like a corkscrew. 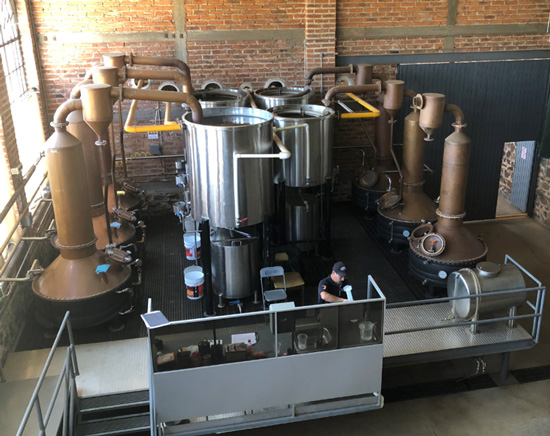 The operator turns up the heat, making steam from the fermented agave and water mixture. The condensation from that steam drips into the stainless steel tanks in the middle. The distiller tests the alcohol throughout the process to make sure it meets purity standards.

The finished product is clear tequila, also called “blanco.” Some of that heads straight into a bottle and onto a truck. It’s ready to drink.

The rest of the blanco tequila goes into barrels for aging. It turns into three different types of tequila, depending on how long it ages in the barrel. Each barrel holds 200 liters. 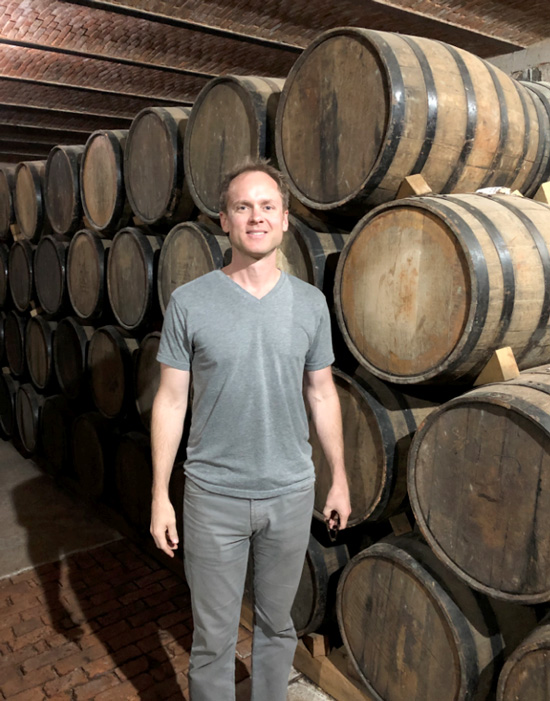 E.B. in front of $8 million worth of barrel-aged tequila

The longer the tequila ages, the darker it becomes. The Extra Añejo is good for sipping, while the blanco goes in the blender at a pool party. 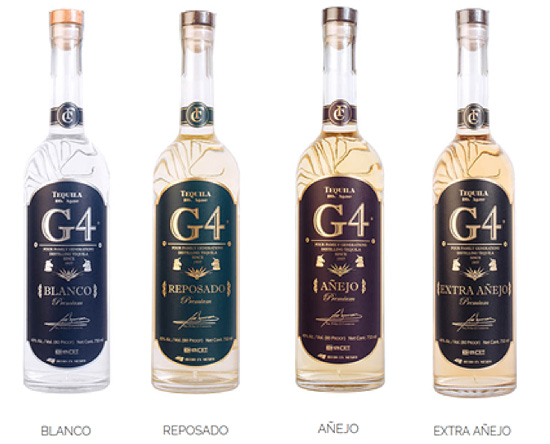 John’s investment in the tequila business is in good shape. He’s especially taciturn when it comes to discussing specifics. I did manage to get an admission that after its first full year, case shipments to U.S. distributors were up triple-digits in the first quarter.

Back in Florida, I bought several bottles at the local liquor store as gifts for friends. They told me the product was exceptional.

If you’re inclined, the company’s website has a locator that lists restaurants and stores that carry the product.

The Stowaway and the IRS Agent

Things got a little tricky when we tried to leave the distillery.

For starters, we had another gringo in tow, named Dudley. He goes by “Danielle” in Spanish. After I told a friend about the upcoming trip, he introduced us over email.

Danielle moved from Texas to Guadalajara in the late 1990s. He jumped at the chance to come see the distillery with us. He said he loves tequila. I was glad to have him, figuring if we ran into trouble in the Mexican interior, six fists give better odds than four.

About halfway through the drive, Danielle pulls out his IRS badge. Granted, he retired years ago and came to see the agency for what it is. I told him the only difference between the mafia and the IRS is that the mafia headquarters doesn’t fly a big American flag.

Since John barely drinks and I don’t drink at all, we left Danielle to do all the tasting with Felipe. He did great. So great in fact, that Felipe didn’t want us to leave. Determined not to spend the night in the hills of rural Mexico, I told John, “We’re leaving.”

Felipe wasn’t having it and got in the rental pickup truck with us. There’s no reasoning with a man who’s been making tequila for 50 years and drinking it for a week straight. He nearly tore the truck apart looking for a cigarette lighter before we could pacify him with the promise of a stop at the next crossroads.

Things worked out great in the end. We had some of the distillery staff rendezvous with us in Jesús María for an early dinner. Then, we had to tell Felipe we’d be back in a minute and make a run for the car. If we hadn’t, I think we’d still be there today.

Felipe Camarena is a man whose life’s work is making some of the best tequila in the world. Of course, he wants his guests to stay and enjoy sipping it with him for days on end. He’s passionate about his product and it shows.

If you do run across G4 Tequila at a restaurant or your local store, give it a try. It’s nice to know where it comes from.

Editor’s note: E.B.’s travels aren’t just his gateway to exotic adventures… they’re part of what give him his edge as an investor.

He’s constantly traveling, talking to people, and doing boots-on-the-ground research to find the best opportunities to grow your wealth.

And his latest idea is already taking off. Investors are sitting on gains as high as 784%… in under a year.

And this opportunity isn’t reserved for Wall Street. Anyone can get in. And E.B.’s giving a free presentation on Wednesday, February 5 at 8 p.m. ET where he’ll show you how to get involved.

You can reserve your spot for free right here.