Justin’s note: Tensions are flaring in the Middle East.

If you read yesterday’s Dispatch, you know what I mean. In short, the U.S. and Iran have been exchanging words lately, even threatening one another with force. And neither side’s backing down.

But this is more than just tough talk. The U.S. recently sent a carrier strike group to the region, along with bombers.

It’s quite serious. In fact, Doug Casey thinks the situation could easily spiral out of control… and even lead to something resembling World War III. He explains why in today’s interview…

Justin: Doug, how do you see the situation in the Middle East playing out? Do you think we’re on the verge of a major shooting war?

Doug: The way the U.S. is antagonizing Iran is stupid, criminal, dangerous, and counterproductive.

Right now, one or more carrier groups are sitting in the Persian Gulf. Presumably to intimidate the Iranians – which makes no sense. It amounts to bullying, going out of your way to pick a fight. The U.S. had better hope this adventure doesn’t spin out of control, because the Gulf is a narrow, shallow sea. Those ships are sitting ducks. A number of them, including a $15 billion carrier, could wind up as a new artificial reef.

How can that happen? U.S. carrier groups are well defended with all kinds of advanced weaponry. But every country today, absolutely including Iran, has supersonic sea-skimming missiles. In addition to ballistic missiles. Even poor backward places like North Korea, with the gross domestic product the size of a medium U.S. city, is a dangerous opponent.

Taking out a carrier in the Gulf, which Caesar would have called a “narrow and difficult” place, won’t be hard. But there won’t just be one missile approaching at 2000 mph from perhaps 30 miles away. They’ll launch them by the hundreds, and quantity has a quality all its own.

That could happen if the U.S. provokes the Iranians. And if that happens, the U.S. will feel obligated to counter attack. The cat’s out of the bag at that point. This could go in any direction, unpredictably, and get completely out of control. It could lead to something resembling World War III. It’s criminally stupid to go looking for trouble – pointlessly – on the other side of the world. The Iranians pose no threat to anyone. In fact, they have cordial relations with everyone in the region, and the world, except the Israelis and the Saudis.

Justin: What about the economic sanctions that Trump imposed on Iran?

Doug: It amazes me that Trump has not just precluded Americans from trading with Iran. He’s also given orders to the Russians, Chinese and everybody else in the world, telling them they’re not allowed to buy Iranian oil.

They aren’t going to abide by that. So, this is not only asking for trouble with Iran, but a complete catastrophe with the rest of the world as well. One consequence is that it will speed up the inevitable dethroning of the U.S. dollar. Nobody wants to use it; they understand the dollar is the unsecured liability of a bankrupt government. And they don’t like the fact their payments all have to clear through New York. There will soon be an alternative to the SWIFT system, probably using gold. The Chinese, the Russians, the Indians, the Iranians – none of them trust each other’s currencies either. But the big loser will be the dollar, and the U.S. Whose major export is actually the dollar.

Iran is an ancient culture. I’m no fan of the Iran regime. But it’s important to understand what your adversary thinks, and why. They resent the U.S. replacing their democratically elected government in 1953 with a puppet, the Shah. They resent the U.S. backing Saddam – its BFF at the time – in a decade-long war that killed a million people. They remember the USS Vincennes shooting down Iran Air flight 655 in 1988, an Airbus A300 on a scheduled run to Dubai. True, the place is controlled by Medieval theocrats who despise and fear the U.S. But so is our current BFF, Saudi Arabia – which is actually far worse in every way. Iran is a danger to no one, not even the Israelis or the Saudis. And absolutely not the U.S. Let it go its own way and do its own thing. Trying to provoke them into something that could turn into World War III is beyond insane. It’s the type of thing I would have expected from Hillary – not from Trump, based on his non-interventionist rhetoric before he was elected.

I’m very happy Trump beat Hillary, but I’m not a great fan of Trump. The man has no philosophical core whatsoever. And, so far as he does, he’s not a libertarian – far from it. He’s an authoritarian who flies by the seat of his pants. He’s capable of doing anything, unpredictably.

Trump has shown extraordinarily bad judgement with the people he’s chosen to surround himself with, particularly National Security Advisor John Bolton and Secretary of State Mike Pompeo. But frankly almost everyone he’s appointed to his cabinet, from Day One, is a member of the Deep State.

Bolton is probably the most dangerous man to have been around a president since Henry Kissinger. He’s a pathological professional warmonger.

What Trump’s doing is similar to poking a small but potentially dangerous animal like a wolverine with a stick. If you poke it enough, the chances are excellent that it’s going to attack because it feels like it has no alternative.

Justin: So I agree that the stakes are high. But what are the chances of an actual shooting war breaking out?

Doug: Anything can happen. It’s got a better chance of spinning out of control than what almost happened with North Korea. Of course the U.S. is also playing chicken with Russia and China, among others. It’s as if Trump still thinks he’s on his reality show.

Unfortunately, I missed my big opportunity to visit Iran a few years ago. I was still living in New Zealand and I was invited as part of the Kiwi team by the Ambassadors Polo Club of Iran, all expenses paid, to play in three cities. I greatly regret not going, but it was physically impossible just then. So I haven’t been there personally.

The average Iranian doesn’t dislike the average American. They love what America represents – or used to represent, at any rate. Just like people everywhere, however, they’ll go shoulder-to-shoulder to fight against the enemy, if they’re attacked. But the U.S. isn’t just antagonizing the Iranians. It’s also antagonizing the Chinese, the Russians, and lots of others. So, things could get very serious.

Justin: Would a war with Iran even be winnable?

Doug: No. The Americans couldn’t win that war. But the U.S. government has learned nothing since its disastrous adventures in Korea in the ’50s and Vietnam in the ’60s and ’70s. They’re losing their almost 20-year-long war after their completely unprovoked attack against Afghanistan. They’ve managed to create a disaster with their unprovoked attack against Iraq. They created ongoing disasters in Syria and Libya. I’m waiting for something to spin out of control in Africa, where it has combat troops in a dozen countries – unbeknown to 99.9% of Boobus americanus. They could all be Somalias in waiting. That adventure is still paying dividends, in the form of something like 200,000 penniless Mohammedan migrants that have been imported from there since then.

But attacking Iran isn’t going to amount to another sport war. It could turn into a major conflict, with consequences that you can’t predict.

Again, what they’re doing is criminally stupid. They’re creating zero friends and lots of new enemies for the U.S. while bankrupting the country in the process. This is an ill wind that blows no good whatsoever – except to Deep State types in Washington.

Justin: How do you think the markets would react to a major conflict with Iran?

I imagine oil and defense stocks would rally if that happens. But what about the overall market? Would a war with Iran bring it down?

Doug: It amazes me that people think war is a good thing. This way of thinking started with the ridiculous notion that World War II drew the country out of the Great Depression. If you define a depression as a period of time when the general standard of living goes down, then the Great Depression really lasted from 1929 to 1946.

There’s nothing like turning a bunch of cities into smoking ruins to lower not just the local standard of living but the global standard of living. The stock, bond, and real estate markets are already on the edge of a precipice. They’re floating on a sea of debt. Even a light breeze – forget about a financial hurricane – could send them into free fall.

The last thing that we need is a major war. There’s no good consequence whatsoever that could come out of the game of chicken the sociopaths around Trump are playing.

Justin’s note: You’ll have the chance to talk to Doug about this topic (and more) at the second annual Legacy Investment Summit in September. Doug and his colleagues from Casey Research will be gathering in Southern California to talk about what big ideas and trends they’re most excited about. And if you want to pay $300 less than everybody else, be sure to book your tickets by May 31. Go here to reserve them now.

Do you agree with Doug that the U.S. is teetering on the brink of war with Iran? What do you think Trump should do about the situation in the Middle East? Send us your thoughts at [email protected].

Most folks already know the market’s due for a massive correction. But it’s the way this move will shake out that’s unusual…

What this man sees coming is a highly specific, unique type of crisis that’s essentially guaranteed to happen this year.

For folks who don’t see it coming – it could wipe out a huge portion of your savings. But for folks who do, you could make tens of thousands of dollars as it transpires… 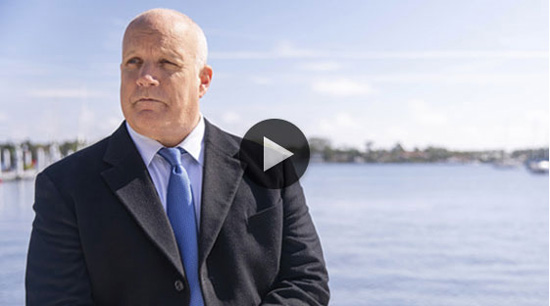