Rachel’s note: Over the past few months, we’ve seen a lot of volatility with bitcoin.

For example, it’s plunged by 73% since its all-time high last November.

But Teeka Tiwari, crypto expert at Palm Beach Research Group, believes this drawdown is only temporary, and that bitcoin will find its way back up again.

What’s more, Teeka foresees a crypto event happening in the markets that can deliver outsized gains. To prepare for it, he’s hosting an online, live briefing on Wednesday, September 21 at 8 p.m. ET. Best of all, it’s free to attend, so sign up here.

Then, read on for Teeka’s number one metric to assess bitcoin’s long-term value…

Imagine you had a tiny scratch on your right leg… And you decided to amputate the entire limb because you feared it would become infected.

I know the analogy is gruesome. Rational people don’t amputate entire limbs because of a tiny scratch. It just doesn’t make any sense.

People are liquidating entire crypto portfolios due to some temporary bad news.

I know it’s painful. But if you pull back the camera, you’ll see this drop is one tiny scratch on an otherwise healthy long-term trajectory.

And this isn’t just wishful thinking, either. We’ve seen bitcoin take some serious lumps over the years, only to come back stronger each time.

The thing to remember about bitcoin is that it’s always found a way back to make new all-time highs.

So, why is bitcoin dropping now? 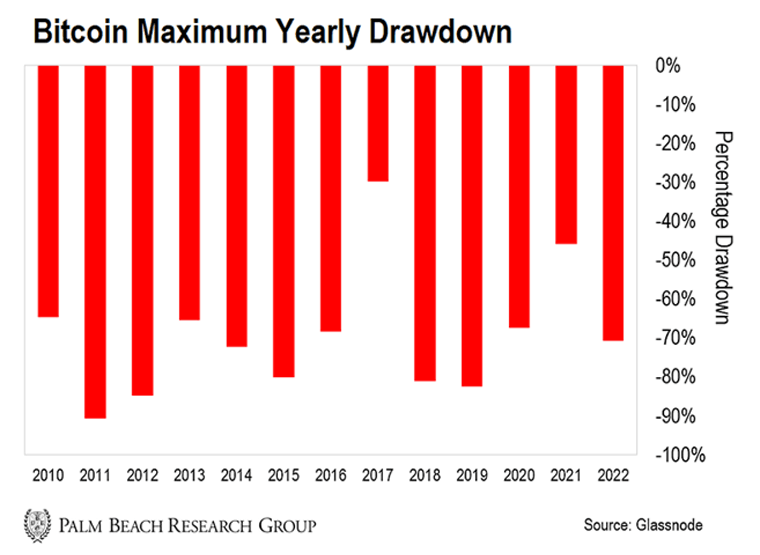 As you know, the Federal Reserve is terrified about inflation. So it’s raising rates to rein in rising prices.

When interest rates rise, risk-on investments like growth stocks drop. That’s a major reason the Nasdaq is down 26% since the beginning of the year.

Right now, investors are correlating bitcoin to tech stocks. And since the market views bitcoin as a high-risk asset, it’s moving in tandem with the Nasdaq.

Now is bitcoin actually correlated to tech stocks? I don’t believe so. It’s a completely different asset class. But that doesn’t matter because for this particular cycle, most market participants believe bitcoin to be the same as a high-growth Nasdaq tech stock.

That doesn’t mean they will always view bitcoin through that lens. It just means that it’s the lens they are using right now.

Over time the market will develop a more sophisticated view of bitcoin, and I expect the two asset prices (Nasdaq and BTC) to diverge. We’re just not there yet, so we currently have a high correlation between the Nasdaq and BTC.

My thesis is that bitcoin will eventually serve as a reserve asset like gold or the U.S. dollar. I believe that over time, the world’s central banks will add bitcoin to their balance sheets.

It bears repeating that it doesn’t matter whether or not I believe bitcoin correlates to tech stocks.

Right now, the market says it does… So over the short term, they’ll move together. And that means more volatility ahead.

But when you look over the long term, you’ll realize the current pullback in bitcoin is nothing out of the ordinary.

It’s more like a scratch on your leg than full-blown gangrene, so there’s no need to amputate (or in this case, sell) it… 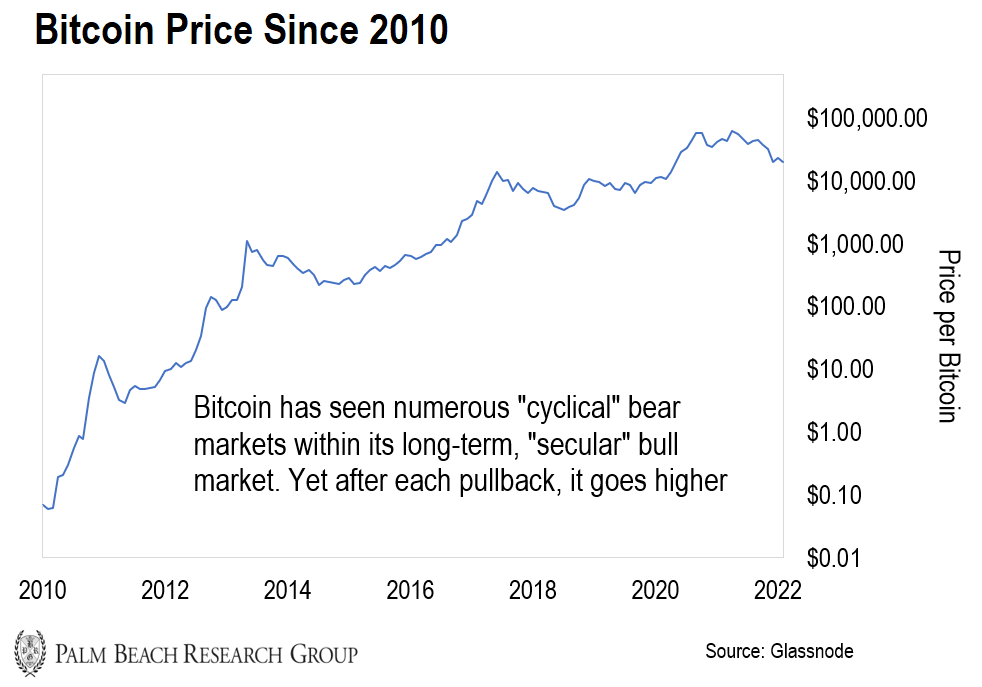 As you can see, the long-term trajectory is up, despite incredible volatility. Like a springboard effect, bitcoin bounces even higher after each drawdown.

The Adoption Story Is Still Intact

Over the years, I’ve learned you can’t just look at price as the sole barometer of long-term value in an asset class. You must look at the overarching adoption story.

As a young investor, I made that mistake with companies like Microsoft, Oracle, and Apple.

I got in these names when they traded for the split equivalent of single-digit dollars… But boy, did I sell way too early.

I confused short-term price volatility with a long-term change in fundamentals.

So instead of price, I now look at a technology’s adoption rate as the No. 1 metric to project long-term value.

In the early 90s, all you needed to know to make a fortune from Microsoft was that the number of personal computers would explode over the next two decades.

It’s the same story with bitcoin…

Crypto.com estimates there are 200 million people who use crypto assets. By the end of this decade, I believe at least 4-5 billion people will be using bitcoin.

And this isn’t just some wild guess, either…

Just last month, BlackRock – the world’s largest asset manager with $10 trillion under management – announced it was entering the crypto space.

One study from deVere Group, an independent financial advisory, reported that more than two-thirds of millennials prefer bitcoin over gold as a safe-haven asset.

According to the U.S. Census Bureau, millennials make up about 22% of the population, and Gen Z makes up 20%. Combined, they’ll eventually account for nearly 50% of the workforce.

So over the next year or so, we’ll see a flood of cash pouring into bitcoin from top-tier institutional firms and everyday millennial investors.

Right now, bitcoin’s market cap is about $387 billion. That’s insanely cheap relative to where my research tells me bitcoin is headed.

Once bitcoin becomes a widely held investment asset, we could see it eclipse gold’s market cap of $11.5 trillion.

So it’s crucially important you understand the adoption cycle and how it works.

Right now, the biggest mistake crypto investors are making is confusing short-term weakness in the markets as a long-term erosion of bitcoin’s value.

Rather than understanding this is a temporary ailment that will repair itself… they’re just dumping their bitcoin.

It’s the equivalent of amputating an entire limb because of a tiny scratch.

Please understand this: Selling great assets into weakness never ends well. You’ll regret it when bitcoin rallies like it has in the past.

If you own bitcoin, the only thing you need to get right is its adoption story.

From the beginning, I’ve said that bitcoin is unique because it’s a decentralized and anti-inflationary currency.

And because of those properties, billions of people would eventually own it.

The key to surviving and thriving through the current volatility is to understand the bitcoin adoption story isn’t going away.

In fact, you should view this pullback as a buying opportunity.

Now, I know I sound like a broken record. But buying world-class assets at discounts is how you profit from volatility.

And bitcoin is a world-class asset.

If you want to buy more bitcoin, I suggest dollar cost averaging a fixed amount of money each week or month. Alternatively, if you are worried about lower prices, use a layering approach where you place a series of buy orders at different levels beneath the current market price.

None of us are going to nail the absolute bottom. But as bitcoin’s trading history has shown us, you don’t have to nail the bottom to make life-changing money from bitcoin.

Friends, I’ve warned you since January that we would be in for an ugly year. And so far, that’s exactly what we’ve seen.

But I’ve also said the weakness this year is a buying opportunity. The moves you make this year will position you to profit when the markets rebound. Use dollar cost averaging, and rational, uniform position sizing, and you will come out of this sell-off far richer than when you entered it.

So ignore the daily price action of bitcoin. We can’t control that.

Focus on the adoption story instead.

It’s the North Star that’s guided me since I started this journey in 2016. And it continues to guide me today.

Let The Game Come to You!

P.S. The tidal wave of mass adoption isn’t the only reason you should be holding bitcoin and crypto today…

Because while the mainstream media is busy bashing bitcoin… or panicking over normal crypto volatility… almost no one is paying attention to a crypto event that’s just days away.

Since entering crypto in 2016, I’ve only had two opportunities like this show up before.

To help all my readers prepare, I’m hosting a live “From Crash to Comeback” online event Wednesday, September 21 at 8 p.m. ET…

There, I’ll tell you exactly what’s happening… what you need to do… and how a handful (five, to be exact) of $250 crypto investments could make you as much as $11,000 per month.

My average peak gain on my free picks would have made you 18x your money.

Again, that was the average… Several picks did much better than that.

This will be my first LIVE crypto event of the year, and I look forward to hearing from you.