Eighty-four years ago, in a remote corner of the Nevada desert, a small group of men was breaking out the champagne.

Rich gold ore at the new discovery stretched nearly three miles… literally as far as the eye could see.

In a hurried report, the supervising engineer wrote that gold here “would seem inexhaustible.” He told financiers that the mine had “exceptional merit.” It would quickly grow into “a very profitable and large enterprise.”

The group raced to turn on the taps. Just a few months later, a mill was up and running. Mining began. By all reports, the gold ore was rich and profitable.

Then, the next year, it all vanished – without a trace. Nothing was written about it again. It was like this El Dorado never existed.

I’ve had that engineer’s report on my desk for the last couple of weeks. On the one hand, it’s exciting. I believe I’ve located the area of the old mine. It’s been completely forgotten… and I think I can acquire it by staking.

Looking in a satellite view, you can actually make out the old mine site. You can even see some of the mine roads traversing the hills, now overgrown with sagebrush.

But the report also worries me.

There’s a good reason the mine vanished without a trace. One that likely had nothing to do with geology or engineering.

We all know what happened in the fall of 1929. The stock market – and the wider economy – plunged into chaos. Companies were wiped out nearly overnight. I strongly suspect that included this gold mining firm with the so-promising future.

We got a taste of such chaos this past March. Although it seems like ancient history now, it was only five months ago that global markets were panicking over COVID-19. The S&P 500 tanked 35% in just a few weeks.

Of course, things immediately rebounded. Since the bottom on March 23, the S&P has surged 54%. The tech-heavy Nasdaq is up even more – a full 67%.

Things have gone from tragic to euphoric in a matter of weeks. So it’s easy to forget things are still pretty bad. At least in terms of economic data.

There are lots of figures I could point to: unemployment, economic growth, government bailouts.

The news is horrendous. Yet markets are soaring. Investors are betting the Federal Reserve – and central banks worldwide – can paper over all this madness with new money.

What Happens to Gold – and Gold Stocks – in a Crash

It’s possible the Fed’s helicopter tactics might work. Since the corona-crash in March, the Fed has pumped out $3 trillion in new money supply. There’ll be more coming.

Stock markets could glide on and continue rising. In fact, stock prices might rise faster than ever because of all the new money sloshing around.

But these are uncharted waters. No one knows what’s going to happen. Common sense dictates the Fed can’t prop up the economy forever. If the music stops, it’s going to be ugly.

But here’s the critical point: gold will also fall if we get a crash.

Many people don’t realize, but the 1930s were the same. Gold mining was one of the few industries that prospered.

Again, it wasn’t a straight line up. The initial shock in 1929 wiped out many investors and companies. I strongly suspect the Nevada gold miner I mentioned above was one of the casualties.

Notice how markets crashed, then rebounded strongly in late 1929 and the first half of 1930. Then came the real wipe-out: from 1930 to 1932, stocks tanked to new lows. Many investors who “bought the dip” in 1930 were left penniless. 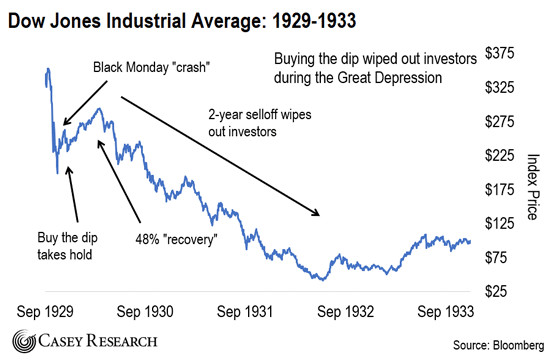 But here’s the surprising thing. That collapse triggered big gains for gold stocks. Here’s a chart showing major gold miner Homestake through the 1930s. Notice how the gold major took flight starting in 1931, when the big crash was in full swing.

There’s another similarity between the 1930s and today. Costs for gold miners are falling.

It’s also possible that rising unemployment in the wake of COVID-19 will help. With more labor available, wages may level off or fall – further enhancing company profits.

If that comes together, this could be a gold bull market for the ages.

Here’s How We’re Going to Play It

So, what to do about all this?

First, check your head. Make sure your investment strategy works in either of the following two cases:

If you’d be uncomfortable watching your gold portfolio drop 50%, it’s time to reduce your exposure. If a 50% fall would stress your finances, definitely cut your positions.

But this doesn’t mean you should panic and sell off all your exposure. Just make sure you have a risk management strategy. This means careful position sizing, allocation to gold… and the right gold stocks.

If you’re not sure where to start, the first step is owning physical gold. After that, consider adding shares of VanEck Vectors Gold Miners ETF (GDX). It holds a basket of miners poised to benefit as gold rallies. Just remember, don’t bet the farm.

But for the biggest gains as gold takes off, investing in miners directly is your best bet. And I work tirelessly to find the best ones for readers of my Strategic Investor advisory. In fact, two of my picks are up 57% and 126%. Go here to learn more.