Rachel’s note: Over at The Daily Cut, our colleague Chris Lowe is committed to helping his readers think more clearly about big issues…

That includes our favorite topics, like monetary sanity… gold… privacy… and the future of money in the U.S.

He says we’re on the cusp of a “monetary shock.” Regular readers know that 1971 was the last one – when Nixon decoupled the dollar from gold, a move that made way for the fake money system we have today.

Below, Chris shows us how the shock to come will crush your financial privacy… and put your dollar savings at risk.

Fortunately, Casey Report chief analyst Nick Giambruno has a plan to help everyday Americans avoid this fate… be sure to check out his urgent advice here.

To most folks, these dates won’t mean much. But they mark a series of monetary “shocks.”

I’m talking about resets of the international monetary order… with profound implications for savers and investors.

As you’ll see today, we’re on the cusp of a fourth shock.

This will obliterate the last shreds of your financial privacy and put your dollar savings at risk.

It will also kick off a stampede into our two favorite alternative currencies and stores of value – gold and bitcoin – and send them soaring to previously unimaginable heights.

Also known as the 1907 Bankers’ Panic, it was a financial crisis that led to a nationwide collapse of banks.

It also led to the establishment of the U.S. Federal Reserve, America’s central bank… and a new era of central bank control over money.

This made it illegal for Americans to own gold… and ushered in a 40% devaluation of the dollar.

President Nixon severed all ties between the U.S. dollar and gold… and ushered in the paper (or “fiat”) money system we have today.

And according to new research by Nick Giambruno at The Casey Report, we’re now on the verge of a fourth shock.

We’ll see the end of physical currency altogether… the rise of a purely digital dollar… and a totally new reality for anyone who earns, uses, or saves U.S. dollars.

There’s a lot to unpack here. So I’ll make sure to go slow so you fully grasp what’s going on… and what’s at stake.

The coronavirus… and the market turbulence it’s caused… has left a lot of folks deeply confused. Some even find it paralyzing.

But it’s in times of profound change like this that the most lucrative wealth-building opportunities lie.

As regular readers know, Nick is our resident crisis investor. Along with Casey Research founder Doug Casey, he’s traveled the world looking for economic, financial, and monetary calamities to profit from.

He even flew with Doug to Zimbabwe, where he met with Gideon Gono. Gono headed up the country’s central bank during its 2007 hyperinflation.

Here’s a photo of them together at Gono’s mansion in Zimbabwe’s capital, Harare: 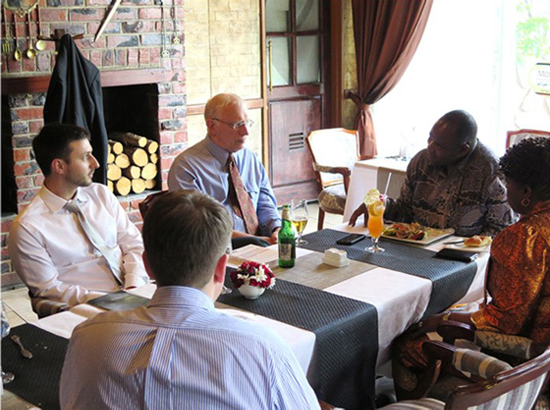 Recently, I talked to Nick by phone about the shock he sees coming. (If you missed that conversation, you can catch up here and here.)

Here’s some of what he told me…

Drastic changes in the international monetary system happen. They happen immediately and without overt warning. And they can be devastating to your savings.

But if you can kind of see how the stars align, you can take action beforehand. By understanding what’s going on, you’ll be able to avoid the fallout and protect your hard-earned nest egg.

You’ll also have the chance to make a few simple strategic investments with the potential to hand you 1,000% or more.

It may sound far-fetched that physical cash is on the way out. But cash has powerful enemies…

Governments hate it because they can’t track and trace transactions. If you and I do a deal in physical cash… only you and I need to know about it.

Banks hate it because it means you don’t have to rely on them to earn and spend. They can’t skim profits off of each transaction.

Financial Elites Also Want to Get Rid of “Crooked” Cash…

You couldn’t find a more perfect example of an establishment economist.

In 2016, he published a book called The Curse of Cash. In it, he argues that the U.S. should phase out physical cash from society.

All paper currency is gradually phased out, beginning with all notes of $50 and above (or foreign equivalent), then next the $20 bill, leaving only $1, $5, and (perhaps) $10 bills.

In Rogoff’s world, governments run the money system – directly. There’s no more messing around with stealthy cash. Payment options you can keep private are banned.

In Many Ways, the War on Cash Is Already Over…

In the U.S., there are already strict controls on cash use.

For instance, if you deposit, transfer, or withdraw $10,000 or more, your bank automatically alerts a bureau within the Treasury Department with a “currency transaction report.” Same thing if you exchange foreign currencies worth $10,000 or more.

The bureau is called the Financial Crimes Enforcement Network (FinCEN). Its job is to monitor, collect, and analyze Americans’ financial transactions.

You can get in trouble with the feds even if you deposit, transfer, withdraw, or exchange currency less than $10,000.

If your bank even thinks you’ve chosen a lower amount to evade FinCEN reporting, it’s obliged to report you. Deliberately trying to evade a report by opting for a smaller amount is a felony called structuring.

It could mean facing a decade in prison.

COVID-19 Is Accelerating the Phaseout of Physical Cash… 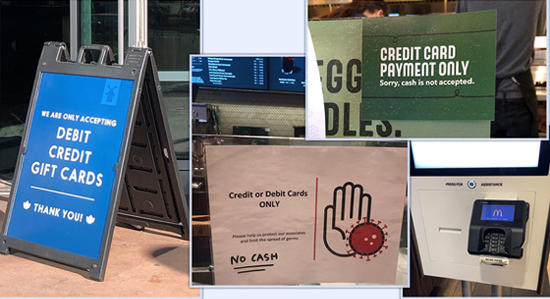 In the Age of COVID-19, cash is becoming toxic

Thanks to the pandemic – and fears that cash is now a vector for disease – retailers, coffee shops, and restaurants are turning away customers who want to pay cash.

This is the final nail in the coffin for the Ben Franklins in your wallet. Here’s Nick again…

Moving to a digital, cashless society has long been on their bucket list. The whole COVID hysteria gives them the perfect pretext to roll it out.

Central Banks Are Standing by With Alternatives…

I’ve shown how China’s central bank is already piloting a digital-only version of its currency, the renminbi.

And more than two-thirds of the world’s central banks have said they’re exploring rolling out their own purely digital currencies.

The Bank of England is researching how to create a digital currency linked to Britain’s currency, the pound sterling.

The Bank of Canada is looking at issuing its own crypto version of the Canadian dollar.

Sweden’s Riksbank – the world’s oldest central bank – is exploring the “e-krona,” a digital-only version of the Swedish krona.

Japan, Singapore, Denmark, and Norway are among the other countries studying digital-only replacements for their national currencies.

And there are plans afoot at the highest levels of power in the U.S. to introduce a digital-only dollar payments system.

In this new system, the Fed will be able to simply credit people’s “FedAccounts” with “FedCoins” when it wants to do another round of stimulus, which I discussed in more detail last week.

I can’t reveal too much more here. For all the shocking details, head on over to Nick’s presentation to see why the endgame of the War on Cash is already here… and how you can protect yourself.