According to one commodities expert, the entire sector could go berserk in 2020.

And if you want to make the most of it, now’s the time to get in.

Let me explain why…

If you’ve been following the Dispatch, you know about one big catalyst: the end of the U.S.-China trade war.

As our in-house commodities expert Dave Forest has been saying, the end of the trade war will bring attention to all commodities.

If you don’t know Dave, he’s a professional geologist who heads up our International Speculator newsletter. And he’s a pro at finding overlooked opportunities in commodities. In fact, one of his most recent picks, a rare earths company, has soared 137% in less than two months.

Dave’s convinced the trade war’s end will be the X factor that kicks this commodities cycle into high gear.

And it could happen much sooner than many think. Here’s Dave:

Trump has just signed off on a “phase-one” deal with China. The U.S. will scrap plans to add tariffs on $160 billion worth of Chinese goods, and in exchange, China will buy more agricultural goods from the U.S.

This is a positive sign. And no matter what kind of final deal they eventually hammer out, the end of this conflict will propel metals prices higher. Because worries about the trade war are the biggest thing holding commodities back right now.

Once the trade war’s over, it’ll be off to the races for key metals. Investors will be euphoric about the global economy again. Combine that 180-degree turn in sentiment with strong fundamentals for metals like copper – and you’ve got an explosive setup.

With one single tweet, the president could send the entire commodities sector into a full-blown mania.

• Dave says it all has to do with one simple chart…

It’s the most important indicator in the resource industry today.

Simply put, it’s telling us that commodities are primed for their biggest rally of the last 50 years.

The chart below tells the whole story. It tracks the S&P GSCI – which tracks prices for 24 commonly traded commodities – relative to the S&P 500. We’ve labeled a few important events on it… 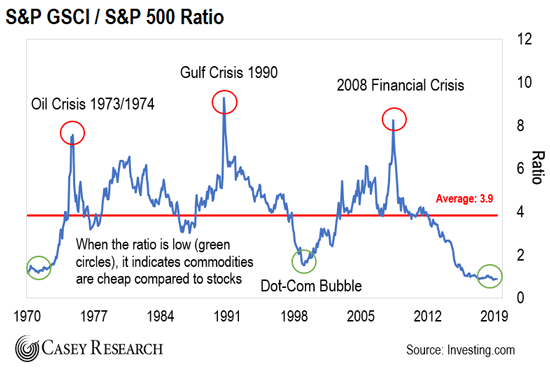 Here’s how Dave breaks it down:

As you can see, when commodities are at historic lows relative to stocks [green circles on the chart], it’s been a great time to buy.

• The opposite is true, too…

History shows you don’t want to be loading up on commodities when they’re expensive relative to stocks. Dave again:

The S&P GSCI was at an extreme high relative to stocks [red circles on the chart] in 1990, at the peak of the Gulf Crisis, when Saddam Hussein’s army was rolling into neighboring Kuwait. That was a terrible time to be a commodities buyer. The S&P GSCI plunged 70% from the end of September 1990 to December 1998.

Another peak for commodities relative to stocks was in 2008, at the start of the global financial crisis. And again, that was a terrible time to buy commodities. From July 2008 to February 2009, the S&P GSCI experienced a 65% peak-to-trough fall.

• If past is prologue, that means commodities are primed for another explosive bull run…

In other words, the commodities sector is currently 80% below its average price relationship with stocks over the past half-century. And it’s lower, on a relative basis, than it was ahead of the big commodities rallies in the early 1970s and the early 2000s.

There are lots of other considerations when it comes to buying natural resources. But if you filter out the noise – and just buy when commodities are historically cheap relative to stocks – Dave says you’ll do very well.

And with the trade war bound to come to an end soon, it’s time to get in – before commodities really take off.

The best way is to invest in individual stocks that have exposure to the commodities that are set to surge the most.

But as a low-risk alternative, Dave says an easy, “one-click” way to get involved is to buy the Invesco DB Commodity Index Tracking Fund (DBC).

It holds 14 of the most heavily traded commodities.

And remember, never bet more money than you can afford to lose. You only need to invest a little bit of money to take advantage of this historic setup.

P.S. Remember, Dave says that the best way to play this surge is with individual stocks that specialize in the hottest commodities, especially ones that have a catalyst for rapid growth.

Dave believes he’s found the perfect opportunity to profit that meets these standards. And surprisingly, while this is a resources story, it’s actually just as much a technology story, too. Check it out here.