They discuss the topic we’ve been following this week at the Dispatch – the rise of oil, and what’s next for the energy sector.

As Dave reveals in the Q&A below, the oil bears have it wrong. Rather than depressing the price of oil… more successful climate activism will send it soaring.

Chris Lowe: Let’s talk about what happened in the oil patch recently.

A bunch of activist investors in ExxonMobil (XOM) joined up with prominent Wall Street investment firms such as The Vanguard Group and BlackRock (BLK). They got together and got two new board members appointed to Exxon. These new board members are going to push the company to curb its emissions.

Then, in the Netherlands, a court ruled that Royal Dutch Shell (RDS-A) had to cut emissions in line with the Paris climate agreement.

And there was a shareholder rebellion at oil major Chevron (CVX). It pushed through a proposal that will force the company to cut emissions.

This all happened within a 24-hour period on a Wednesday at the end of May. Folks in the mainstream press have dubbed it “Black Wednesday” for the oil industry. That’s a reference to the devastating Black Monday stock market crash in 1987.

What was your read on the whole thing? And what does it mean for the price of oil?

Dave Forest: This is a trend that’s been in motion for some time. In the courts, there have been surprising advances of lawsuits that seek to hold Big Oil companies financially accountable for climate change.

You can imagine the effect of being held responsible for climate change. It would be the end of a company.

These latest developments are accelerating that trend. They point toward the end of these large oil companies – at least in their current forms.

If they survive, they’re probably not going to be oil companies in 10 years. In 20 years, they certainly won’t be. This is creating many different and exciting opportunities for us as investors.

These oil companies are scrambling to change. They’re trying to maintain themselves as energy companies. But they want to switch into new kinds of clean energies. And they have a lot of cash to bring to bear on these plans.

Chris: Does that mean it will become so risky to drill for oil we’re going to leave it in the ground? Will we continue this shift away from fossil fuels toward renewables?

Dave: That’s probably going to be true in the case of Big Oil. Activist shareholders, emboldened by their recent wins, will pressure the companies that are in the public eye to further curb their pumping of oil.

But despite all the green initiatives going on around the globe, the oil price is in an uptrend. Electric vehicles and clean energy may have their day. But fossil fuels, including oil, still are the best way to maintain our way of life today.

We still use more than 80 million barrels of crude oil a day. And demand is not changing as fast as the political landscape is.

The bottom line is the world still needs a lot of oil. That’s going to be an opportunity for companies still willing and able to pump and sell it.

Maybe we’ll see a landscape where companies that are not large enough to attract the attention of massive Wall Street hedge funds and big activist groups are able to continue producing oil. That would be a huge opportunity for those companies.

It may also change the geographic profile of oil production. We may see a situation where oil production ends in the U.S. and Canada… but companies in other countries are still pumping it out of the ground.

And that could be insanely lucrative for the companies operating in those places.

Chris: Let’s stick with the first half of that opportunity for a moment.

Credit rating agency Moody’s (MCO) said it expects more of these activist decisions to filter through to the oil majors. That suggests we haven’t seen the last of these types of moves.

When these big companies look around and think, “We need to shift out of drilling for oil. But we want to stay in energy companies,” what energy sources do they start to focus on?

Dave: Shell was the most proactive. It saw the writing on the wall regarding carbon emissions several years ago. And it started the switch.

Its first go-to was natural gas. But the jury is out on whether that’ll be a viable strategy. Activists are also targeting this fossil fuel for its climate change implications.

The other thing that’s happened recently is solar power – particularly in the renewable space – has come into its own.

In the last couple of years, the cost to produce solar panels and solar cells became economically viable. Wind energy, too. Solar and wind power projects are now viable for these companies. So there’s been a lot of movement among the Big Oil companies to get into these alternatives.

That’s why I’m bullish on the “energy metals” – lithium, cobalt, nickel, and the other metals that are critical ingredients of these rechargeable batteries.

Chris: Where does this leave oil prices?

Dave: That brings us to the second big opportunity. If we do see further edicts that say Big Oil companies can’t drill anymore, oil prices are going to go up. By a lot…

I know this is hard to wrap your head around. After all, we’ve seen plenty of obituaries in the mainstream press for the oil industry. But as these companies become pariahs, we’ll likely see their profits go up along with the oil price.

Chris: You’re saying the rise in climate activism could be a boon for companies drilling for oil – and for oil prices – because oil is becoming harder to produce?

Dave: That’s right. As you’ve been writing about at the Cut, we’re seeing some red flags that suggest we’re entering a period of inflation.

My team and I at International Speculator just analyzed the assets that perform best in times of inflation. The two best performers have been oil and real estate.

If we enter an inflationary period, like the 1970s, oil will probably do well – even without a supply squeeze.

And if enough companies stop drilling for oil… causing a supply squeeze… we could see oil at a couple hundred dollars a barrel. That would be rocket fuel for oil stocks.

Chris: Thanks for chatting with me, Dave.

Kris’ note: As I mentioned up top, Dave has racked up stunning gains in natural resource stocks. But there’s one type of speculation that’s helped him deliver even bigger gains for his readers…

It’s something most regular investors have never heard of. But it’s super-investor Warren Buffett’s No. 1 private investment. And Dave has used these little-known speculations to give his readers a shot at locking in gains of 392%… 2,805%… and even 4,942%. Better still, you can buy these speculations for as little as 15 cents. Go here to find out more.

This edition of Chart Watch continues our week-long coverage of the energy sector.

Today, we’ll look at the VanEck Vectors Oil Services ETF – OIH. This ETF is composed of companies that support oil producers with equipment, drilling, and exploration.

Before we dig into OIH’s price chart, I want to set the stage for the technical pattern we’ll analyze…

One of my favorite strategies for capturing big moves in the markets is what I call the “Base Channel Breakout,” or BCB for short.

The BCB is great at helping traders stay patient. One of the worst habits a trader can develop is trying to pick tops and bottoms. It’s far better to try and capture the meat of a move than to call the top or bottom in a market.

Too often, traders will waste their capital by taking wildly speculative bets with little chances of winning. Then, when a truly great opportunity comes around, they’re either out of ammunition… or they’re trigger shy because of past losses.

The BCB is an easy solution that keeps you out of the market until it’s the right time to pull that trigger.

With this in mind, let’s look at a chart of OIH. 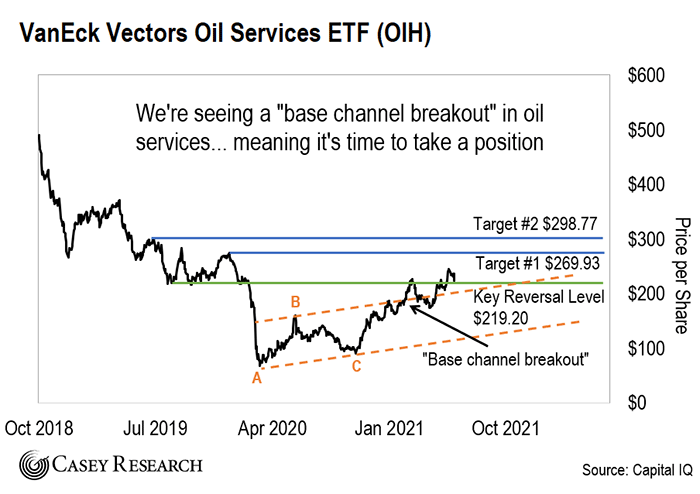 Before we discuss targets and stop loss points, let’s cover the base channel.

You can draw a base channel whenever you think a market is gearing up for a potentially big move.

To draw a base channel, we need three points of contact.

You start by drawing a trend line connecting points A and C. You then take a parallel of that line and bring it to point B. This gives you the upper and lower boundaries of the base channel.

When prices break out of the upper boundary of the base channel, this is your cue to potentially take a position.

The purpose of the base channel is to prevent you from getting too excited when it looks like the market has bottomed out. Instead of trying to catch a falling knife, the BCB will only signal a potential trade when you have confirmation the price is going higher.

Finally, notice how after the breakout of the base channel in February, OIH pulled back in April to test the upper boundary of the channel as support.

This level is important because of how the market has historically treated it as both support and resistance. You can see how $219.20 supported prices before OIH broke down hard in 2020. And then, in March 2021, this level became the resistance. The bullish case stayed alive when prices found support off the upper boundary of the base channel.

We’ll keep track of this chart and see how it plays out.