Chris’ note: For over 18 months, Palm Beach Research Group co-founder Tom Dyson has been backpacking around the globe with his ex-wife and kids… journaling what he sees unfolding in the world economy… and thinking about new ways to build long-lasting wealth.

Before he left on this journey, he sold all of his stock holdings and transferred all his assets into gold – a move we’re a huge fan of at Casey Research.

Tom sends out daily Postcards to his readers (which you can instantly sign up for by clicking here) with unique boots-on-the-ground insights.

As you know… that type of research is our bread and butter at the Dispatch. So today, we’re sharing one of Tom’s Postcards that gives an interesting insight into China’s economy.

Even if you’re not familiar with him, we think you’ll enjoy it…

Can you imagine mobilizing hundreds of thousands of workers – including the top engineers of the day – and putting them to work for 40 years to build something that you then bury?

First, he unified China. (China gets its name from him.)

Then he ordered the creation of 7,000 life-size soldiers, horses, and chariots, made of clay, which he then installed in a giant tomb to “guard” his corpse in the afterlife.

Each statue in the emperor’s Terracotta Army is 6 feet tall and weighs 300 pounds.

There are archers, infantrymen, cavalry, charioteers, and army officers. Every soldier has a unique face… like they were maybe based on real people. They are exquisite. 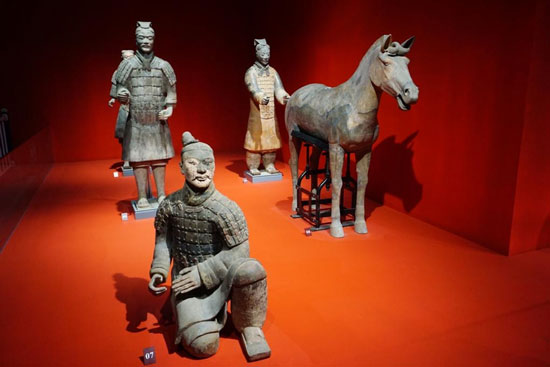 7,000 of these 300-pound statues were meant to guard Emperor Qin’s body in the afterlife

They call it the eighth wonder of the world. 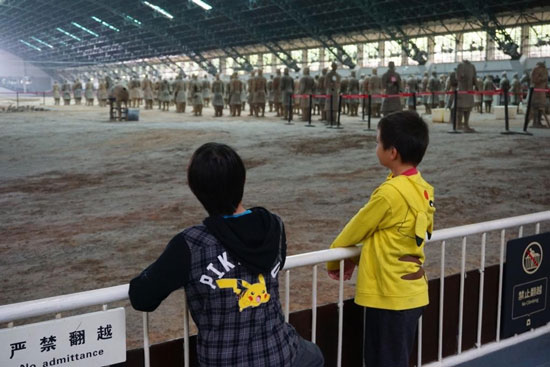 The story doesn’t end here. I’ll tell you what happened next in a minute…

From Hostel to Hostel

My ex-wife and I are on sabbatical. We decided to backpack around the world with our three kids: Dusty, Miles, and Penny.

During our stay in China, we traveled around the country on the high-speed railway. We stopped now and again to stay in a hostel for a few days, catch our breath, eat some noodles, and check out the local scenery. Then we moved on again.

We’ve covered more than 2,000 miles and stayed in a dozen different hostels.

We were just in Xi’an, a city of 12 million people in the middle of China, near where they buried Emperor Qin and his Terracotta Army.

(You can keep up with our travels – and my commentary on the global economy – by clicking here to instantly sign up for Postcards From the Fringe. I send a new postcard out at 7 p.m. ET every weekday.)

China is currently building a new “Terracotta Army.” Except the terracotta statues of the 21st century aren’t made of clay. They’re built of steel and cement…

They’re everywhere. In every city, in every town and in every village. Sometimes, we even saw them in the middle of nowhere. They build them in mini-cities. Dozens of identical buildings of exactly the same height and design placed in neat rows.

Some look old. Some look new. And a lot of them are still being built. As I write these words, there must be over 10,000 high-rise apartment buildings under construction right now in China.

You can spot them by the cranes on their roofs. We looked for them out of the train window every time we rolled through a new town.

Incredibly, despite all these new apartments coming onto the market each day, prices are still rising. Our friend Jessica owns an apartment here in Xi’an. She tells us its price has doubled in the last three years.

Then there are all the new roads, expressways, tunnels, bridges, railways, train stations, subway systems, power plants, etc., they are building…

It’s an incredible thing to behold. And China gets the money to pour all this cement and dig all these holes by borrowing from its banks.

Look at the chart below. It shows the growth of the banking systems of China, America, Europe, and Japan over the last 10 years: 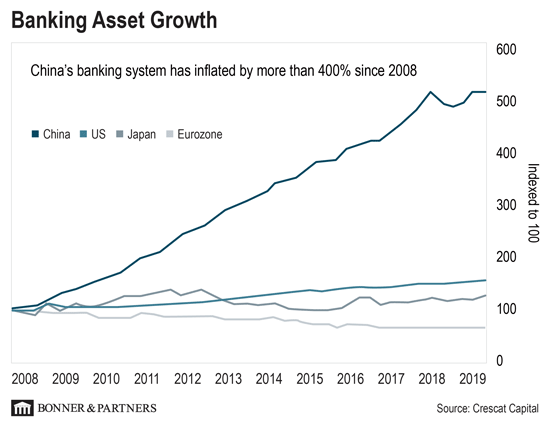 China’s economy is 36% smaller than America’s by GDP, yet its banking system is now 2.2 times bigger. The four largest banks in the world are Chinese banks.

The big questions are, are these projects going to be economic? Or will they turn out to be wastes? And what’ll happen to all the loans China’s banks have made?

Kate and I noted a lot of the buildings are empty. We could tell they were empty by either getting up close… or by looking for dark buildings at night.

We also noticed a lot of empty seats in the railway stations.

In October, China reported its slowest economic growth since 1992. Meanwhile, according to Reuters, prices are falling at the factory gate but rising for the consumer. That’s a bad combo.

According to the Financial Times:

China’s central bank made an unexpected Rmb200bn ($28bn) injection into the banking system on Wednesday [October 16], highlighting policymakers’ concerns over liquidity levels as economic growth falls to a 30-year low.

We won’t know how this story ends for a while, but I can tell you what happened to the Terracotta Army…

The Future of China’s Boom?

The year after Emperor Qin died and they buried the army, there was an uprising. The government was overthrown. Marauders broke into his tomb, destroyed all the terracotta statues, set it all on fire, and then left it for the weeds to reclaim.

In 1974 – more than 2,000 years later – some farmers were drilling a well in a field when they found some broken pieces of pottery. They dug a little deeper and found themselves in a cavern the size of an airport hangar filled with broken clay soldiers.

They call it the greatest archaeological discovery of the 20th century. Today, it’s one of the main tourist sites in China, receiving over 20 million visitors a year…

P.S. In 2018, my ex-wife Kate and I sold everything… handed over the keys to our Delray Beach apartments… drained our bank accounts… and converted everything to gold.

Now, we live out of a small suitcase, exploring the world with our three kids.