I grew up at a chilling 53.5 degrees latitude in Edmonton, Canada.

During winters in Edmonton, it’s not uncommon to hit minus-40 degrees. That brutal cold can last weeks or even months.

Once when I was away on business, my wife phoned in the night to tell me our natural gas furnace had died during a brutal cold snap. She’d called the repairman, but they were so busy they wouldn’t be able to come until the next day.

Our daughters were just toddlers at the time. The furnace repairman told my wife to gather the three of them in one room, get all the blankets in the house, and huddle together until morning.

Children are especially susceptible to hypothermia’s killing effects, and there was a real chance the worst could happen.

Fortunately, they were fine… But it was a harrowing night.

Episodes like that gave me a soft spot for natural gas. I always associated the fuel with safety, warmth, and comfort. In places like Edmonton, it’s a literal lifeline.

These days, not everyone feels so grateful toward gas. In fact, a growing faction is downright hostile toward the fuel.

That’s creating some huge disconnects in energy markets… and an even bigger investment opportunity.

This Problem Signals a Major Opportunity

That usually means sentiment has trumped intelligence among investors… and we’re already seeing this in the energy sector.

If you’ve lived in, visited, or seen New York on TV, you know it’s cold in winter. Home heating is pretty important.

Many in New York keep themselves warm with natural gas. It’s especially affordable these days, with U.S. natural gas prices sitting at their lowest in nearly four years, around $2.25 per MMBtu (one million British thermal units, a unit of measure for the energy content in fuel).

Although many New Yorkers rely on gas, they don’t like the idea of drilling for it. In 2014, the state passed a ban on fracking – the technique for unlocking huge oil and gas reserves elsewhere in America.

But no problem. Even though New York doesn’t produce gas, it lies just beside one of the country’s biggest shale plays: the Marcellus/Utica shale of Pennsylvania and Ohio.

It’s technically very simple to pump gas from the Marcellus to homes in New York.

Faced with rising demand, National Grid applied to build a new pipeline. This would bring additional supply from producing areas like the Marcellus to send on to customers.

But the state said no. In May 2019, New York regulators turned down the approval for the pipeline construction. They cited concerns over water, among other things.

This caused a firestorm. New York Governor Andrew Cuomo publicly raged against National Grid. He threatened to strip its operating license and kick it out of the state.

Finally, the utility capitulated, and agreed to hook everyone up – even without supply.

This is insanity. The governor and the state are basically saying, “We won’t let you bring more gas into the state… but you need to supply everyone who wants gas.”

They want gas to just magically appear for everyone who wants it.

Governor Cuomo said instead of pipelines, the utility should look at solutions like a liquefied natural gas (LNG) terminal for imports. But if a pipeline can’t get permitted, it’s impossible an LNG facility would ever get approval.

In any case, an LNG facility would take years to turn on. It’s highly likely New Yorkers would be freezing and eating cold beans from a can long before it’s set up.

You Can’t Change People’s Minds, But You Can Protect Yourself

The New York example is a sign of the times. Oil and natural gas have become villains – it’s fashionable for government and citizens to rail against drilling, pipelines, and anything associated.

But no one wants to pay the toll for taking this high ground. They still expect to be kept comfortable, at no additional cost.

Last month, I wrote about the riots in leading South American copper nation Chile. Those protests were touched off by a slight increase in transit fares – which itself was caused by increased operating costs after trains were switched to green wind and solar power, at the urging of the public.

But when asked to pay a small fee increase for that green power, the public took to the streets and burned down the city.

We’re going to see more of this short-sighted greed. The inevitable result is that energy supply in spots like New York will run short, and prices will spike.

This is crippling for consumers. Many of them will be the same people who protested against new pipelines.

But you can hedge yourself against these price surges by owning the companies that supply natural gas, who benefit from supply shortages – whether actual or government-created.

In November, the European Investment Bank said it will end funding of oil and gas projects, cutting $2.2 billion in funding.

Moves like that have depressed valuations on many natural gas companies. My team and I surveyed leading pipeline firms in America: Right now, the average dividend yield on these stocks is a hefty 8.5%. Some are paying investors up to 26%.

Remember, these are utility stocks – traditionally seen as the safest bets on the market. They’re the kind of companies supposed to do well when we move into uncertain economic times.

But today, they’re the lepers of Wall Street.

There’s a sense right now the oil and gas business is on its death bed. If you listen to politicians like New York’s Governor Cuomo, it sounds like the end is nigh and soon everything will run on rainbows and nice thoughts.

This is, of course, greatly exaggerated. Oil, and especially natural gas, aren’t going away for a long time. Gas is by far the best option for home heating, and an increasing share of America’s electric power comes from gas-fired generation.

Big bank analysts will tell you pipeline companies are risky right now. They’ll say oil and gas supply is decreasing as drilling slows, so midstream companies are going to take a hit when their business contracts.

That’s true in some cases. Basins like the Eagle Ford of Texas are seeing a fall in drilling rates. But as the chart below shows, production in places like the Permian Basin, the Haynesville shale, and the Appalachia region (near New York state) continued to rise in 2019. 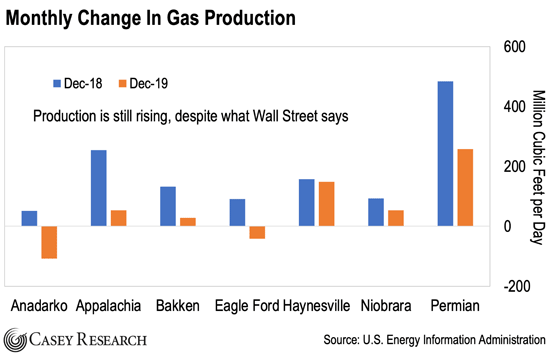 Production growth isn’t as strong as 2018. But the situation in New York shows how demand in some spots is continuing to increase. In fact, regulatory incompetence could create spectacular spikes locally. When the negative sentiment passes, and these companies are still standing and making good profits, investors are going to jump on the big yields in the sector.

The Alerian MLP ETF (AMLP) is an exchange-traded fund that gives investors a one-stop shop for oil and gas infrastructure plays. These are companies that own pipelines and other energy distribution networks.

Yields on many of the fund’s oil and gas holdings are sky-high. AMLP as a whole averages over a 9% yield.

I believe valuations on these stocks will rebound as sense eventually returns to the energy sector. That should prime ETFs like this for gains.

But in the meantime, we get paid handsomely through distributions (the MLP equivalent of dividends) while we wait. The tax treatment of distributions varies depending where you live, so make sure to talk to a financial advisor before you invest. And of course, never invest more money than you can afford to lose.

P.S. Buying into natural gas is a great first step toward strengthening your portfolio in the coming months.

But if you really want to juice your returns for 2020… I just released an urgent video update I recommend you watch right now.

You need to see it for yourself (especially the first 47 seconds).

Because if you watch this demonstration – and take the steps I recommend – you could see up to 30 to 60 times your money… in months, not years.

Go here to get all the details…