Editor’s note: This week was another volatile one for the markets. The S&P 500’s wild swings triggered the market’s circuit breakers again on Wednesday, briefly halting trading for the fourth time in two weeks. And the panic surrounding the coronavirus pandemic continues to spread.

We know this is an uncertain time for many of our readers. Protecting your portfolio – and capturing gains wherever you can – is more important than ever right now. That’s why today, we’re sharing a piece from our friend over at Palm Beach Research Group, Teeka Tiwari.

Teeka’s an expert on cryptos. And he says we’re on the brink of a revolution in the space that could make you millions – with just a small stake. (He shared all the details Wednesday night – get the replay here if you missed it.)

After you watch it, read below to learn about the technology behind cryptocurrencies… and why Trump Tower illustrates crypto’s potential for explosive growth…

I call it “genesis” technology…

In 100 years from now, when people look back on the waves of innovation launching us to new levels of human advancement, they’ll point to this technology at this moment in time and say, “That was the beginning”…

So what technology am I referring to? The blockchain.

Now, you may know blockchain as the underlying technology behind bitcoin and other cryptos.

But if you’re like most people, you might not be sure exactly why it matters… or why some believe it’ll create more millionaires than any other technology before it.

The best way to explain it is with an example from another industry you’re probably more familiar with: Real estate.

As you know, President Trump made the bulk of his fortune in real estate. And while Trump Tower is a symbol of his wealth, it also illustrates an important concept about innovation: “highest and best use.”

You see, centuries ago, Trump Tower was just an empty piece of land. In 1845, you could’ve bought the lot it rests on for only $160.

Forty years later, William Astor – the millionaire behind the Waldorf Astoria Hotel – built a handful of private townhomes on the land.

So Astor transformed the land for a “higher and better use.”

But was it the “best” use? Not quite. Fast-forward to 1929. That’s when Stewart and Company bought the land from Astor.

It ran department stores. So it got rid of the townhomes and put up a 12-story building instead.

Eventually, Bonwit Teller, another retailer, took over. And things stayed the same for the next 50 years… until President Trump bought the property in 1979 for $15 million.

And what did the president do back then? Did he keep the 12 stories?

He replaced it with a fresh, 58-story tower that houses Gucci and Tiffany on the first floor… 13 floors of corporate offices… and 260 million-dollar condos (which had attracted tenants like Johnny Carson, Liberace, and Michael Jackson).

Today, Trump Tower is worth an estimated $340 million.

Just think about that. It went from a dirt lot… to a handful of townhomes… to this: 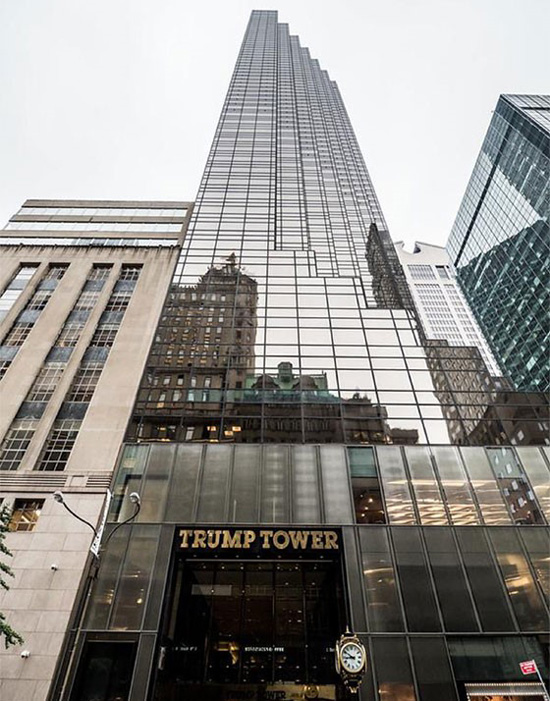 Here’s why I’m sharing this with you…

Trump Tower is a simple way to illustrate why the blockchain will be so transformative.

You see, it’d be silly to write off Trump Tower as nothing more than an empty lot or a few fancy townhomes…

Just as it would’ve been crazy to look at AOL back in 1992 and say, “Yeah, that’s the highest and best use of the internet.”

Doing so would’ve made you miss the bigger picture – and life-changing gains as the internet took off.

That’s why you should see bitcoin and cryptos as merely the first use – the genesis – of blockchain. It’s the equivalent of the handful of townhomes back in the 1800s.

And by capturing just a small sliver of this explosive growth, it could be the equivalent of buying Microsoft in 1986… Amazon in 1997… or Apple back in 2003 (when I recommended it to my former retail brokerage clients).

That’s why I’ve devoted the last four years of my life to learning more about blockchain than anyone else: To uncover the “genesis” of this trend.

The Next Highest and Best Uses

And stock exchanges in Australia, Switzerland, and Singapore are planning to launch blockchain technology by 2021.

Plus, Deutsche Bank released a study in late 2019 saying cryptos – which depend on blockchains – could replace cash by 2030.

That’s why the World Economic Forum has projected that blockchain will store 10% of the world’s GDP by 2027.

Meanwhile, global investment bank RBC Capital Markets estimates the blockchain ecosystem could be worth up to $10 trillion within the next 10 to 15 years.

Now is the time to position yourself in this trend. The simplest way is to take a small stake in bitcoin and ether – the world’s two largest blockchains.

Friends, I want you to know we are at the early stages of blockchain adoption… The opportunity to make a fortune from the next Apple, Google, Facebook, or Amazon won’t come from traditional tech. It will come from the blockchain.

Unfortunately, you’ve likely never heard of many of these up-and-comers. And that might make you hesitant to enter the crypto markets. If this describes you, I want you to know I understand.

I’ve devoted the last four years of my life to understanding this market… And if you’ll let me, I’d like to help guide you through it.

I’d like to educate you about these companies in this space. I want to show you the problems they’re solving.

Most importantly, I want to help you make the decision to start adding some of them to your investment portfolio. Because I believe these projects can explode your wealth to a level you have never seen before.

So watch my special presentation here, where I reveal the key drivers behind this millionaire-making event… and how a small stake could make you a fortune.

P.S. For the last six months, I’ve been on a world tour, jetting across the globe to investigate a millionaire-making event. And on Wednesday, I took you to the epicenter of this phenomenon…

But if you missed it, don’t worry. Go here to view the replay… See with your own eyes why this event is 100% guaranteed to take place. It has the potential to mint millionaires in 2020 – just like it did the last time it happened in 2016.

I also released my new “5 Coins to $5 Million” buy list for 2020. Learn the names of these five coins and how to access them right here.