The ink was barely dry…

By the time yesterday’s Dispatch hit your inbox, bitcoin was already legal tender in El Salvador.

We guess that happens when a government has a big majority. It can move fast.

Well, yesterday we looked at bitcoin from one of the biggest macroeconomic stories in recent times.

Today, we’ll take it from a different angle – in a way that could help you profit from bitcoin’s next big move…

Welcome to the Dispatch. And if you’re a regular reader, welcome back.

We have two main goals:

We do this by showcasing ideas from our in-house investing experts, including Nick Giambruno, Dave Forest, and the founder of our business, Doug Casey.

Before we get into today’s effort, let’s recap yesterday’s issue.

A New Challenge for the U.S. Dollar

El Salvador passed a law to make bitcoin legal tender. That will put bitcoin on the same level as the U.S. dollar.

It will mean the El Salvador government will accept bitcoin as payment for taxes.

It will mean companies and consumers can pay and receive bitcoin in exchange for goods and services.

And it’s all entirely legal.

It will also mean that bitcoin transactions won’t have a capital gains tax.

That alone is extraordinary news.

Now, whether other countries follow El Salvador is another story.

And more importantly for you – especially if you own, or plan to buy bitcoin – is where the price is heading next.

For that analysis, we turn to colleague and technical analysis expert Imre Gams.

An Early Warning for Any Market

We discussed the price action by video call yesterday… as the bitcoin price was moving higher from the recent low.

Your editor isn’t a technical analysis expert. That’s why Imre was on hand to explain what the bitcoin price action looks like right now.

We especially wanted to know his take on bitcoin, seeing as it has fallen 54% from its high. We figured many bitcoin investors are wondering just what is going on.

Imre will give us some insight on that today.

(By the way, Imre has been trading markets for more than 12 years. He trades anything for which there is a liquid market and where he can get price and chart data. That’s why we value his analysis on a subject like bitcoin.)

According to Imre, the charts that follow are some of the most important price charts you’ll ever see.

This pattern is my “canary in the coal mine.” It gives me an early warning that something big is about to happen.

What’s interesting is that this pattern has appeared twice in bitcoin over the last two months, and it has just appeared again right now.

You can see it on the following chart. It’s what is known as a “triangle” pattern, shown by the two red trendlines: 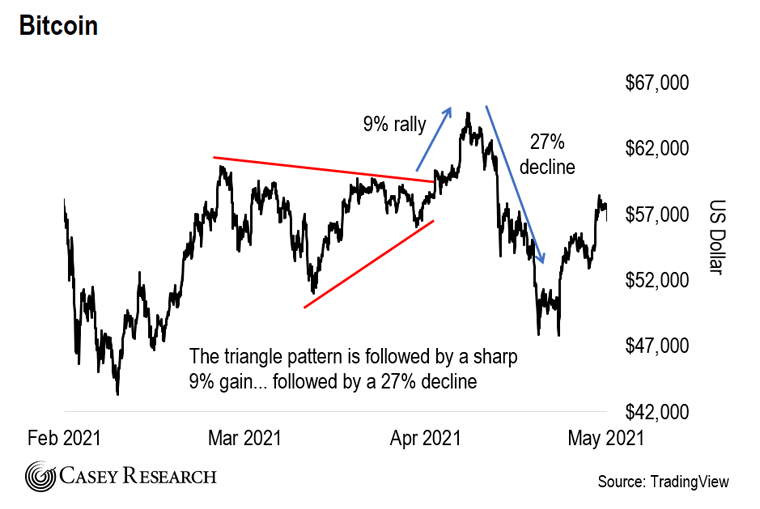 The point to note is how the price action consolidated between the two lines, before breaking out. Imre likens this to a buildup in pressure. Many investors and traders can see the pattern forming… they know the boundaries.

And they all know what’s going to happen next… once the price breaks out of the triangle formation. You can see on the chart above how the initial move resulted in a sharp 9% gain, followed by a sharper 27% drop.

See the next chart. A similar pattern. This time the sharp moves happened in the opposite directions: 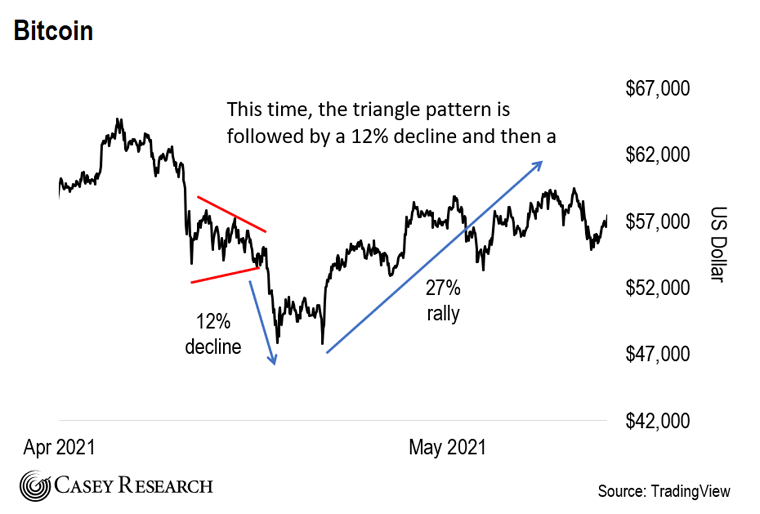 After bitcoin topped out in April, it swiftly dropped. After that, prices went sideways for a few days. Soon, it became clear that this was another triangle formation – again, the two red trend lines.

Once the price broke through the triangle, it resulted in a sharp but short decline… followed by a powerful 27% rally.

And that is why triangle formations are so powerful.

After a triangle breaks out, prices will experience a swift move in that direction, followed by a sharp reversal of the trend.

That brings us to the current price action… and how to play it. 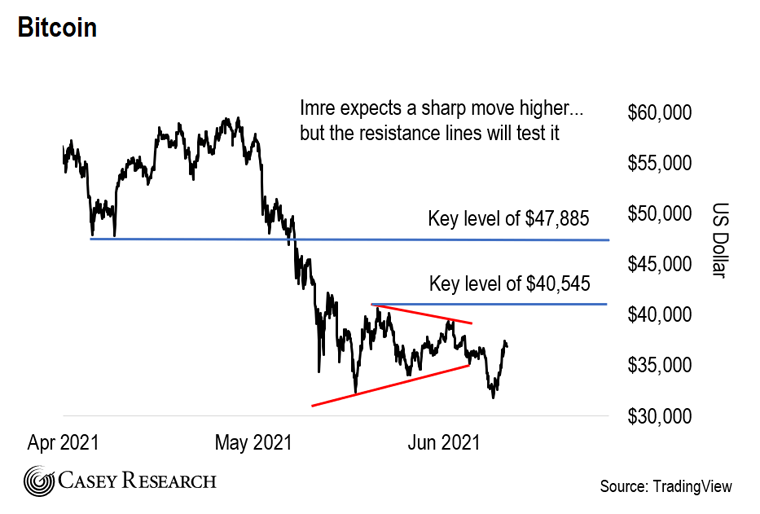 Imre explains how this breakout and reversal should play out:

While triangles can present a short-term trading opportunity where you simply go with the momentum of that first move… the real opportunity is the powerful reversal that happens soon after.

Looking at the chart now, there’s a good chance that the first swift move from this triangle has already finished. If so, we’ll expect to see a sharp move higher. How high?

Well, there are two major resistance levels I have my eye on. The first is $40,545. This level is the top of the latest triangle.

The second is $47,885. This was a key support level that was taken out during the decline. If we can get back above $47,885, it would put bitcoin firmly back on bullish footing.

Traders love volatility. When prices move, there are opportunities to profit. If Imre’s analysis is right, even after yesterday’s quick move, there should be further gains to come.

That makes now a great time to consider adding bitcoin to your portfolio… or adding more if you’ve been waiting for the right time to do so.

P.S. We know we’ve focused on the technical analysis side of bitcoin today, but we can’t mention bitcoin without reminding you of the wonderful fundamental analysis on the subject by Nick Giambruno.

We bring it up because of how El Salvador plans to generate energy for its bitcoin mining projects – by using geothermal energy from the country’s volcanos! While Nick has mostly focused on bitcoin miners harnessing energy from flared natural gas, the geothermal project in El Salvador shows just how quickly these ideas have moved from the fringe, right to the edge of the mainstream.

You can check out how to get all of Nick’s important analysis here.