And that has many people salivating… for good reason.

You see, bitcoin – the world’s most valuable cryptocurrency – has been in a brutal bear market since December 2017. During that span, it lost as much as 84% of its value.

But it’s shown strength recently. It’s risen more than 35% over the last month… and is now trading above $5,000 for the first time since last November.

That has many people now declaring the bitcoin bear market dead.

And while bitcoin’s recent surge is encouraging, it’s important to exercise discipline.

I’ll tell you why in a second. But let’s first take a closer look at what happened.

Many attributed this huge move to a massive purchase by a mysterious “whale.”

“There has been a single order that has been algorithmically-managed across these three venues, of around 20,000 BTC,” he said.

“If you look at the volumes on each of those three exchanges – there were in-concert, synchronized, units of volume of around 7,000 BTC in an hour.”

This is why so many speculators are excited.

Many people believe this could be the start of bitcoin’s next parabolic move. And it very well could be… as Disruptive Profits senior analyst and in-house crypto expert Marco Wutzer explains below:

Excitement has returned to the crypto market.

A coordinated buy of about $100 million in bitcoin across three exchanges by what appears to be a single buyer has sparked a bullish move and pushed bitcoin above $5,000.

There have been signs in recent weeks that the crypto market has digested the excess of the 2017 bull market. It has pulled back and cooled off enough that a new positive trend can develop now.

• Marco knows what he’s talking about…

Marco is one of the pioneers of cryptocurrencies and has been involved with digital currencies since the late 1990s – long before the current blockchain breakthrough.

And like our founder Doug Casey, he’s an “international man.” He made so much money from his early contrarian investments in digital currencies that he dropped everything and traveled the world… while heading a group of top crypto developers and investors.

Throughout his career, Marco has seen bitcoin go into three major bear markets, in which bitcoin dropped 80%-plus each time. More from Marco:

It’s possible that this big move is a “bull trap.” [A bull trap is a false signal that occurs when a decreasing trend has unexpectedly reversed.]

If the December 2018 lows in the $3,200 range actually were the bottom, it will only be apparent in a few more months.

Nothing goes up in a straight line. So it will only be natural to see some consolidation here or even a further correction.

In other words, we could see another leg down over the next few weeks. A drop below $3,000 is even possible.

But that wouldn’t be something to fear. If anything, that would represent the best buying opportunity in years.

Marco says we need to see more before we know this is the beginning of bitcoin’s next big move:

In this case, that means consistently buying quality projects when the broad market is weak and then doing nothing until the market swings back to bullish extremes.

Of course, this is easier said than done. It requires resisting the urge to “do something” when the market’s extremely volatile. It also demands patience and fortitude to just wait for a long time.

So don’t worry about trying to time bottoms or tops. Focus on riding the big wave instead.

Bitcoin and the bigger Blockchain Ecosystem are the new financial system. It will slowly grab more market share, take over the global economy, and eliminate traditional middlemen such as banks.

Of course, this process could take many years to unfold… But it will make smart speculators a fortune.

However, it’s not time to throw caution to the wind. So don’t obsess over daily moves. And don’t bet more money on cryptos than you can afford to lose.

Speculators who do these things will set themselves up for huge gains, without exposing themselves to catastrophic losses.

P.S. Marco uncovers the world’s best blockchain projects – ones that have the potential to become 300-baggers – in his Disruptive Profits newsletter. He’s able to do this by using his proprietary “T4” system. You can learn more about his elite strategy – and access all his under-the-radar picks – with a subscription to Disruptive Profits. Go here to sign up today.

Chart of the Day: Platinum Is Set to Surge

And that could signal the beginning of a major rally for a key metal: platinum.

Platinum is a precious metal, like gold and silver. But it also has important industrial applications, used in everything from catalytic converters… surgical tools… and even the circuits in your cell phone. 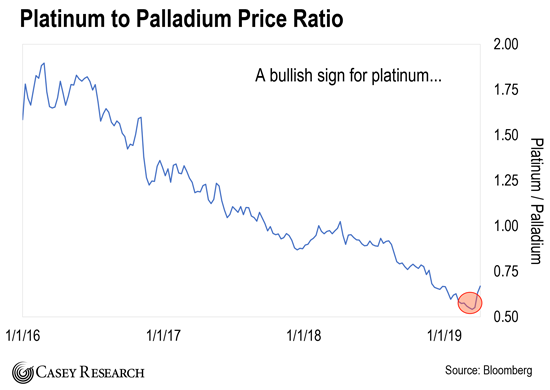 You can see platinum has been significantly underperforming palladium since early 2016. This is largely because palladium went on a monster run. Its price rose as much as 241% over the last three years… and reached a record high three weeks ago.

That’s why this key ratio has been in decline for the last three years – but notice what’s happened recently.

The line on this chart has skyrocketed. There are two reasons for this. One, the price of palladium has fallen 19% since its peak on March 22. Secondly, platinum’s gone on a huge surge. It’s up 11% over the past month.

This is a big development. And it could mean that platinum will significantly outperform palladium going forward.

You see, platinum and palladium are sister metals. They’re substitutes for one another when it comes to certain industrial uses.

That’s important because platinum continues to trade at a near-record discount to palladium. Because of that, many industrial end users could favor platinum over palladium going forward… and that would obviously be bullish for platinum.

So consider speculating on platinum if you haven’t yet. You can easily do this by buying the Aberdeen Standard Physical Platinum Shares ETF (PPLT). This fund tracks the price of platinum.

I also encourage you to read my April 3 Dispatch on platinum, where I shared more reasons why platinum could soon be on the verge of a major rally.

P.S. Our in-house commodities expert Dave Forest is also bullish on platinum. But there’s another metal on his radar that most people are completely overlooking today. And thanks to President Trump’s new Executive Order, this obscure metal could soar in value in the coming months…

It all has to do with something called “liquid energy cubes”… and you can get the full details in Dave’s brand-new video presentation.

Are you positioned for the next big move in crypto? How about commodities? Let us know your thoughts at [email protected].