Today, we continue our prediction series with the year’s best-performing asset – bitcoin.

(To recap, on Monday, we talked about our prediction for interest rates and gave a way for you to beat the government at its own game… and yesterday, we discussed where the U.S. dollar is headed.)

Last year, we called for bitcoin to go higher. We said, “We wouldn’t be surprised to see it as one of the top performing speculations in 2021.”

That call was spot on… by a long shot. 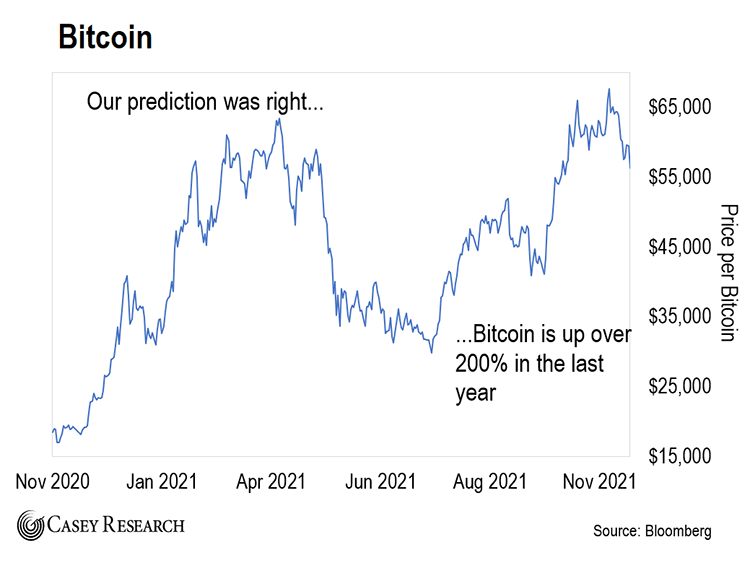 As we said last year, bitcoin can be a polarizing topic. On one side, bitcoin evangelists say it’s the future of money. On the other side, bitcoin skeptics call it worthless.

We’re not here to settle that debate. Our goal isn’t to predict the future of money. It’s to try to see where the trend is heading and find ways to profit from it.

Today, more and more people are starting to put money into bitcoin and its little cousin ether (ETH). Everyone has their own reasons for buying and holding these two coins. Some are in it for the speculation. Some view it as an inflation hedge.

While we think it still exhibits more characteristics of a speculative tool, we can also recognize when facts start to change.

What we see happening today is that bitcoin and ether can be both speculation tools and inflation hedges at the same time. Inflation is helping them become more traditional stores of value.

That’s because as prices rise, more and more people feel left behind. It takes more of their paycheck to buy the same amount of food, leaving little for other goods and services. So they’re turning to bitcoin to help make up for the shortfall.

But its wild volatility makes it a prime target for active traders to speculate on its price.

That may seem counterintuitive but consider that more people are buying bitcoin monthly. Or taking their salary in bitcoin.

But we think we’re still a long way off from mass adoption. Even though companies like Coinbase (COIN) make it easy to buy and sell major cryptocurrencies, bitcoin’s penetration rate is still only about 13% in the U.S., according to the University of Chicago. About 24% of Americans trade stocks.

If adoption rates continue ticking higher, that will help keep a floor on bitcoin prices. If demand dries up, watch out below.

What we see ahead for 2022, though, is more of the same. Bitcoin is another beneficiary of reckless government money-printing. So long as the government continues to hit the print button, assets like bitcoin will keep rising. Our prediction for bitcoin – and ether – in 2022 is higher. 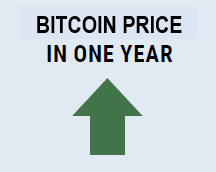 One note of caution: be mindful of your position sizing if you choose to speculate in crypto. If you’re up all night worrying about the volatile price swings, you probably have far too much at stake. You should be able to rest easy at night. Don’t bet more than you can afford to lose.

Now, Teeka has his eye on a new opportunity to profit from bitcoin’s “Final Halving.” It’s not a preprogrammed, one-day supply cut. In fact, it has nothing to do with bitcoin’s code. But it’s so powerful an event, it could cut the new supply of bitcoin to near zero by 2022.

Teeka is hosting a special event all about it tonight, at 8 p.m. ET. So make sure to sign up for that here. It’s free to attend for all Casey Research readers.