For only his most honored dinner guests, French Emperor Napoleon III was rumored to use a rare set of aluminum cutlery. Regular guests had to make do with gold forks and knives.

In the mid-1800s, pure aluminum metal was rarer and more prized than even gold.

That’s why, at the time, the French government held bullion bars of aluminum as part of the national treasures, and the French elite wore aluminum jewelry.

Aluminum is one of the most abundant elements found on Earth. But most of it exists as chemical compounds, not as metal.

And the price reflected that.

But in 1886, scientists discovered a way to cheaply produce massive quantities of aluminum metal relative to existing stocks.

In less than 15 years, aluminum went from being the most expensive metal on Earth to one of the cheapest.

Today, it’s not used to serve the most honored royal guests or as part of a country’s national treasure. People use aluminum as a component of everyday household items like soda cans and aluminum foil.

This story illustrates a crucial economic concept. Understanding it is key to preventing investment losses. But it’s also key to positioning yourself for big profits in one critical asset.

This Economic Concept Is Crucial to Your Wealth

Aluminum’s rapid transformation from a precious metal of the highest order to a cheap, everyday household item is an instructive example of the stock-to-flow (SF) ratio.

The “stock” part refers to the amount of something available, like current stockpiles. It’s the supply already mined. It’s available right away.

The “flow” part refers to the new supply added each year from production and other sources. The Stock/Flow (SF) ratio is the number of years of new supply needed to equal current supply.

A low SF ratio indicates the opposite. It means that market balance can be swayed by the new supply easily. If an annual supply of something is close to its current stock, the new supply will have a lot of power over the value of that commodity or asset.

It should come as no surprise that gold, a perfect example of a hard asset, has the highest SF ratio of all commodities. With an SF ratio of 58, it would take about 58 years of the current rate of new supply to equal the existing gold supply.

But now, with the advent of the digital age, people have a new type of hard asset to lean on.

Bitcoin shares many of the same attributes of gold that make it attractive as money. It’s durable, divisible, convenient, consistent, and has strict scarcity. 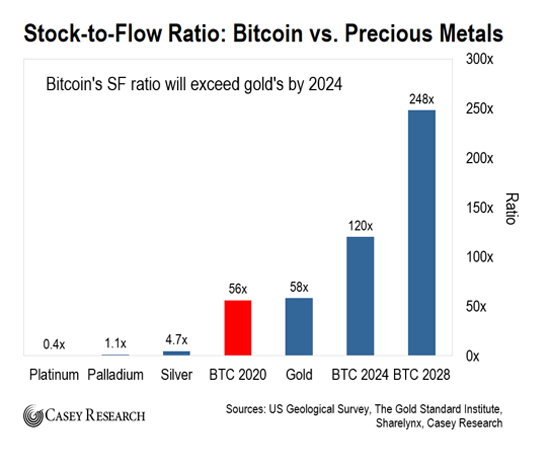 How is this possible?

First, because Bitcoin has no central authority. That means no human, or government, can decide to arbitrarily inflate the supply of Bitcoins and steal value from holders. This is what we’re seeing today with rampant and irresponsible money-printing by the government.

Instead, it runs on a secure decentralized network scattered around the world on thousands of computers. Bitcoin does not rely on so-called “trusted” intermediaries or third parties.

A key feature of the Bitcoin protocol is that the block subsidy gets cut in half roughly every four years through a process known as “halving.”

Another key feature of the Bitcoin protocol: There will never be more than 21 million Bitcoins. This, plus the halvings, will result in Bitcoin being the hardest asset known to man. As of writing, there are 18.4 million Bitcoins in existence, or about 88% of the total potential supply.

The remaining 12% of new Bitcoins will be added, through the block subsidy, at an ever-decreasing rate.

By the end of this decade, over 98% of all Bitcoins will have already been created. The annual growth rate of new Bitcoins relative to the current stock will be close to zero.

Bitcoin and Gold Are Your Tickets to Financial Freedom

I see Bitcoin as a complementary tool for advancing your financial freedom.

There is a tendency for people to be attracted to harder money over time. During financial crises or when government-issued fiat currency rapidly loses its value, the process is fast in motion.

That’s when people rush toward harder assets. And I believe we are not far off from the next global financial crisis – especially in the wake of the COVID-19 pandemic and massive money-printing.

Bitcoin Is Popular in Crisis-Prone Countries

Bitcoin is already hugely popular in countries with high rates of inflation, like Zimbabwe, Venezuela, Turkey, and Argentina.

Bitcoin offers regular people a haven. They can easily use it to send and receive wealth. That might mean paying for goods and services when the local paper money becomes worthless, or discreetly receiving a much-needed influx from relatives who have managed to get out.

In a crisis, Bitcoin is invaluable to the common man. I spend a lot of time in Argentina and have seen it firsthand.

At writing, Bitcoin’s market cap is around $177 billion, which is almost three times as large as the monetary base of Argentina.

If it were a government currency, Bitcoin would be the 35th largest currency by its monetary base.

Bottom line: Think of Bitcoin’s increasing hardness like a black hole sucking in capital from weaker currencies and assets. The bigger the crisis, the bigger Bitcoin gets.

And as governments around the world continue printing unprecedented amounts of currency in the wake of COVID-19, I believe this process will only accelerate.

P.S. I don’t want anyone to be blindsided by the government’s wrongheaded reaction to this economic crisis. As you know, government bureaucrats never let a crisis go to waste.

So, while everyone is looking in the other direction, there is a plan to confiscate main street Americans’ wealth. I believe it will take effect by January 1, 2021.

I put this briefing together to make sure you know how to protect your family’s financial security from this underhanded cash grab. Make sure you’re prepared today.