Richard Branson, a UK-born billionaire, traveled about 53 miles above Earth to the edge of space.

The crew of six, Branson among them, spent about four minutes in zero gravity and could see the curvature of the Earth.

Since then, several things have happened.

First (of course), Virgin Galactic sent its founder to the edge of space.

Branson’s fortune soared from about $4.8 billion to $5.3 billion.

Bezos’ fortune increased by $7 billion between the start of July and the launch date.

And… just this past Wednesday, William Shatner, the 90-year-old Star Trek actor… became the oldest person ever to travel to space, thanks to billionaire Jeff Bezos’ space tourism rocket. (More on Jeff Bezos’ ventures later.) 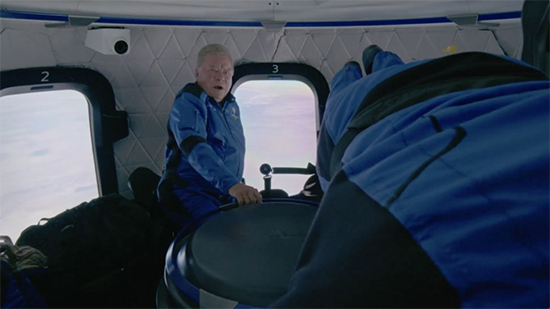 This is all incredibly exciting for space tourism. If we can send a nonagenarian into space… there’s hope for the rest of us.

But back to Virgin Galactic’s launch…

When the company itself became public, it offered investors a tool that generated a return of over 600% within months…

If you’ve been reading the Dispatch, you’ll know the tool we’re talking about is warrants. In fact, we’ve been pounding the table on this incredible investment tool. 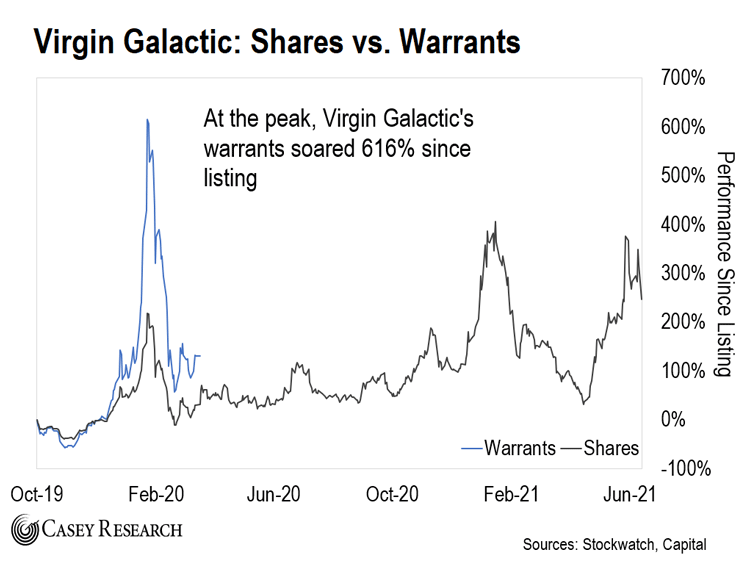 At their peak, Virgin Galactic’s warrants were up about 616%. Even though the company’s shares delivered a 400% return in February, they haven’t approached that level yet.

But the more important part is this…

The warrants were redeemed in early 2020. Which means that they were only available for a limited time.

The reason? Well, in my opinion, Virgin decided to redeem the warrants because they performed too well. See, the higher the share price, the more valuable the warrants are.

So Virgin decided to do a “buyback” for its warrants. Investors who held them got a fraction of Virgin’s shares.

Which is not the worst outcome, but as I said earlier, the shares’ performance has never matched that of the warrants’.

In other words, when a warrant opportunity presents itself, there’s often no time to waste.

Warrants move fast, and the issuing company may decide to recall them from the market if their performance is too good.

Let’s keep that in mind while checking out how billionaire Jeff Bezos has been using warrants to force his own investments up.

Six Warrant Deals to the Tune of $2.5 Billion

That’s over 10 times the value from just three years ago.

Here’s an example of how Bezos uses the warrants…

But in 2019, the company wanted to expand its partnership. So Amazon decided to invest in Cargojet. It demanded warrants in return for the investment.

But for Amazon to “unlock” all the warrants, it has to spend $400 million with Cargojet over that timeframe.

Today, shares of Cargojet trade for $202. That means Amazon’s warrants are showing about a $250 million gain so far. That’s how Amazon was able to “force” the Cargojet share price higher.

As mentioned above, Bezos has done this six times before… to huge gains.

But regular investors have never been able to ride his coattails on the deals… until now.

Jeff Bezos has another deal in the works – lucky number seven.

And yes… it has to do with warrants in the next company he’s investing in. And for the first time, regular investors have the chance to get in on the deal.

As mentioned above, when a warrant opportunity presents itself, there’s often no time to waste. The warrants market is intentionally kept under-the-radar by billionaire investors… and is difficult to research.

Fortunately, Strategic Trader editor Dave Forest has been leading subscribers to outstanding warrants returns for over two years. Realized gains of 4,942%… 2,805%… and 393%. And we’re sure there’s more to come, since one of his open positions is currently up 1,363%.

As for the seventh warrants deal, take it from Dave…

That’s why I’m holding my first live event on Wednesday, October 20 at 8 p.m. ET to get the word out.

It’s called the “Zero to Retirement Summit,” and I’ll give you all the details on how to ride Jeff Bezos’ coattails.

I believe those of you who get in before mid-November will be able to make 49 years’ worth of profits… in one trade.

If that sounds too good to be true, I urge you to sign up for my event. It’s free… and you owe it to yourself to be informed about these billionaires’ dealings.

Clearly… billionaire astronauts love warrants and know how to build fortunes with them. Now, you can benefit from this incredible asset as well.

Remember, warrants are as easy to invest in as stocks. No complicated options chains, or special brokerage accreditation requirements either.

So don’t forget to reserve your spot for Dave’s event here.