Joe Biden has lost his mind.

During the 2020 election campaign, then candidate Biden promised to cut back on oil and gas drilling. Not only that, he promised to curb existing production. It was all in the name of climate change.

So far, he’s lived up to his word. Permits for new oil and gas wells are on hold. And production in the U.S. is down from its all-time highs.

It may be a noble goal. It may not.

I’m not here to debate climate change. There are plenty of others with opinions on the topic.

The point is, there are usually unintended consequences that come with major decisions…

Politicians don’t usually care about these effects. They like the splashy headline because it makes it look like they’re “doing something.”

Sometimes that something does far more damage than good. Just take a look at the price of oil today: 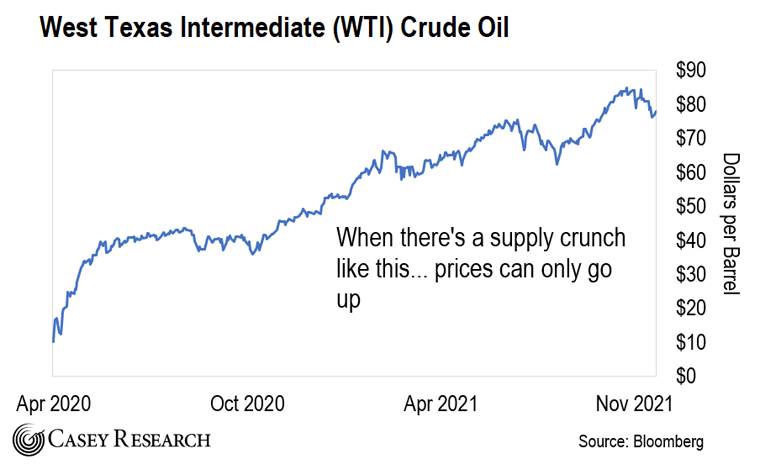 While today’s price is only about halfway to all-time highs, it’s surged 62% this year alone. It may not be that long before we’re talking about $150 oil.

Prices Only Go One Way in This Situation

When demand stays the same but you reduce supply, prices only go one way: up. That’s especially true for the one thing that makes modern-day life possible.

It’s the most important commodity on the planet, and politicians worldwide are attacking it.

Which brings us back to Joe Biden. When oil prices started rising, the White House mostly ignored it.

Then prices crept even higher. So the solution was an easy one – just ask OPEC and Russia to pump more oil while at the same time curbing production back home.

OPEC and Russia said, “No!”

When prices in a free market move higher, companies in that business tend to make more money. That’s Economics 101. Joe must have missed that class.

Now gas prices are at their highest level in seven years. The pressure is mounting to “do something.” Joe has a solution: release 50 million barrels of oil from the U.S. Strategic Petroleum Reserve (SPR).

However, presidents, past and present, sometimes use it for political reasons. That’s the case today.

That’s like using masking tape to cover a busted pipe. Sure, it may stop things for a minute. But eventually, water starts gushing again.

So you see, Joe Biden truly has lost his mind. First, he creates a problem with his policies. Then he blames others for that problem. Finally, he gives a short-term fix to try to solve the problem he created in the first place.

Now… that’s not to say things would be any different with someone else in power. Biden just happens to be that person today.

Higher oil prices may be a kick in the gut for consumers, but they don’t have to be. In fact, all of these Biden blunders make oil one of the easiest trades to make today.

For most people, buying an ETF (exchange-traded fund) like the SPDR S&P Oil & Gas Exploration & Production ETF (XOP) may work just fine. So far this year, it’s up 77%.

P.S. Readers of our paid publications ­know we can do much better than 77%. In fact, subscribers of the Strategic Investor are up over 335% on a big-name oil play…

But we didn’t do it by using stocks. My colleague Dave Forest and I find these winners for our readers by using warrants. You can get in on our strategy right here.

Warrants give us leverage to a rising stock price. If a stock doubles, its warrants may do much better. Instead of a 100% return, you could see a 500%… 1,000%… or more from the warrants.

But that’s just a start. Today, we have several oil and gas warrant recommendations in our portfolios.

When the president hands you a gift, you take it. Biden may be losing his mind with oil and gas, but someone’s surely going to profit from it. It might as well be you.