That’s when Richard Nixon addressed the American people in a speech called “The Challenge of Peace.” 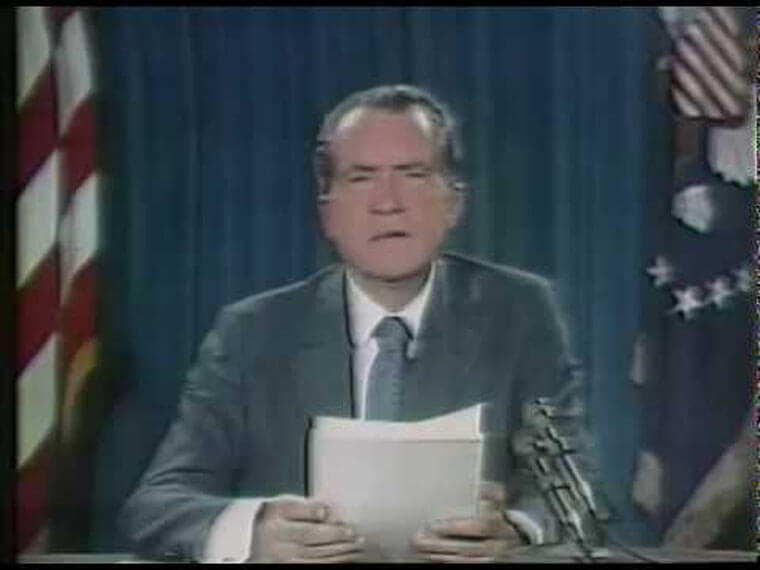 Nixon during “The Challenge of Peace” speech

But instead of telling them the truth, his aim was to sell people a lie.

That’s because that day, Nixon devalued the savings and earning power of every American. It’s the day he broke the dollar’s tie to gold.

The speech took only 18 minutes. It was a masterpiece. (You can watch it here.) Very few people at the time noticed what was happening.

That’s because Nixon tried to disguise the real reason for his speech.

At first, he talked about soldiers in Vietnam unable to find work after returning home from “success” during the war.

Then, he talked about inflation.

For five years up to that point, the Consumer Price Index (CPI) rose 6% per year. Americans were having a hard time keeping up. So Nixon promised to break that trend. He promised the average American that help was on the way.

It wasn’t until about halfway through his speech that he finally got to his real reason for speaking. That’s when Nixon said, “Let me lay to rest the bugaboo of what is called devaluation.”

He knew what was about to happen to the wealth of the average American. He just didn’t want anyone else to figure it out.

So Nixon blamed the problem on a group of “international money speculators.” He said they were responsible for raising prices on everyday goods. They kept veterans from finding work.

But it was all a lie.

The truth was the U.S. was in an envious position. It held the world’s go-to currency. The gold in Fort Knox gave it that power. But politicians abused that position for years by running persistent budget deficits.

Nixon didn’t have a choice if the U.S. wanted to keep running deficits. So he had to cut the dollar’s tie to gold.

Luckily for Nixon, most people don’t understand how currencies work. It can be complicated. I know from experience because I traded currencies years ago.

And that’s how Nixon was able to get away with saying “evil speculators” relentlessly attacked the dollar.

In reality, U.S. deficit spending was so extreme, foreign governments lost confidence. So they rushed for the exits. They grabbed as much U.S. gold as they could on the way out.

What happened next was nothing short of astonishing. The value of the U.S. dollar fell hard. This is what it looked like at the time. 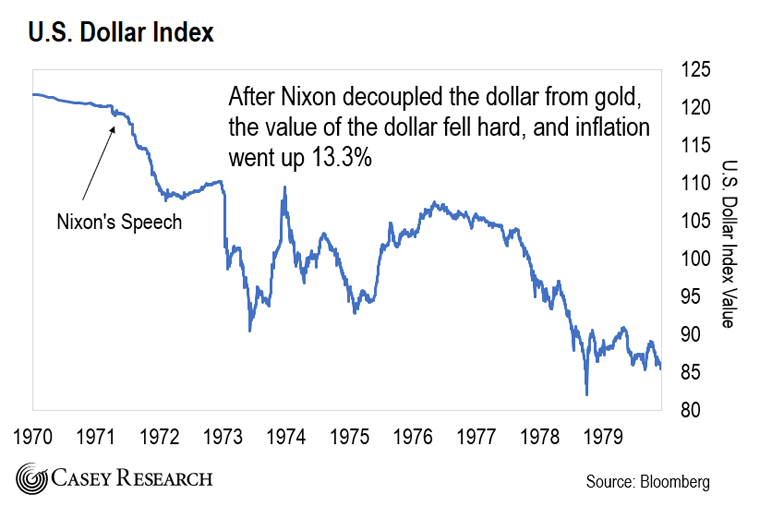 Nixon knew it would happen. Most people found out the hard way.

The War Rages On

But it’s not just a one-off inflation reading. Since the start of the pandemic, it’s been a trend in motion. 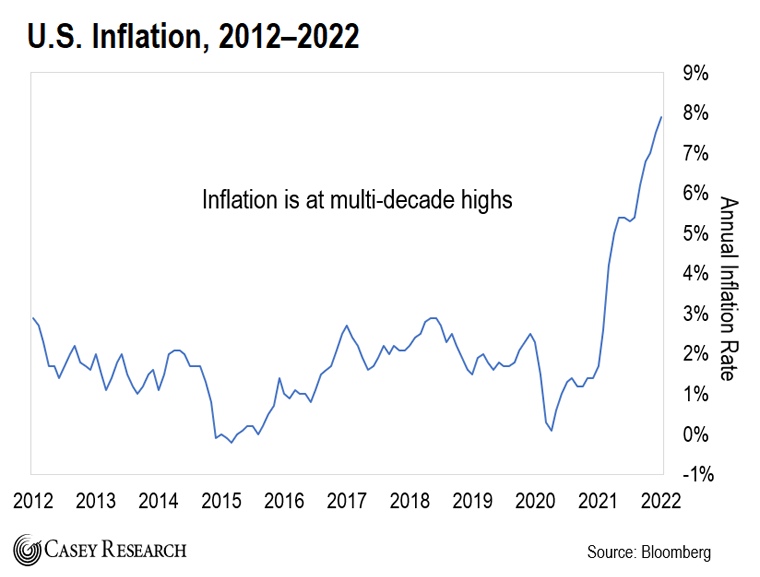 We’re staring down a double-barreled inflation shotgun with the hammer cocked back and a finger on the trigger.

It’s not unlike the 1970s after Nixon’s speech. In fact, politics doesn’t seem to have changed much since then.

And today, even President Biden is trying to hide the truth from the American people. Except this time, his “bugaboo” is Russia.

The problem is this trend was already well underway before Russia invaded Ukraine. I’d even argue we haven’t seen the effects of the war in official inflation numbers yet. That’s because the most recent surge in commodities – like oil and wheat – didn’t start until March 1.

But President Biden, just like Nixon before him, is hoping the American people don’t notice.

In fact, you could say that decision 50 years ago is the reason why we’re in this inflationary mess to begin with. When you have a government with nothing to keep spending in check, they’ll spend away. 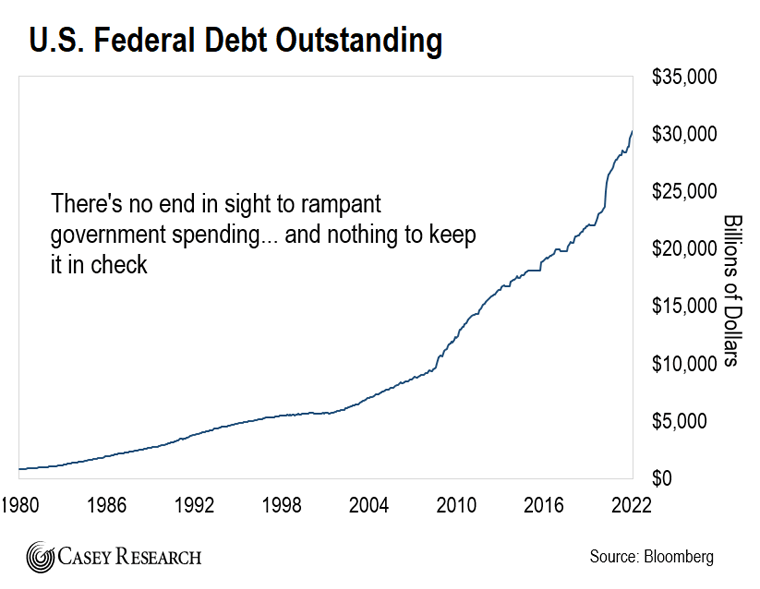 Eventually… all that money created out of thin air spills over into prices for everyday goods and services. When it’s a slow drip, inflation tends to stay in check. So at 2% or less, most people can handle it.

But when money comes flooding into the system, it gets harder and harder to keep up. At today’s pace, you’ll lose over 25% of the value of what’s in your checkbook in four years.

Luckily, there’s a way to protect your hard-earned dollars from inflation. But it’s not what you think.

Readers of our flagship Strategic Investor service know we’ve been on the inflation case for some time. We started preparing for it long before most people realized what was happening.

When we mention inflation, most people think about gold. And they’re right. Owning gold and gold stocks is one of the traditional ways to fight inflation.

Over the past two decades, farmland has far outperformed just about any asset class, including gold. 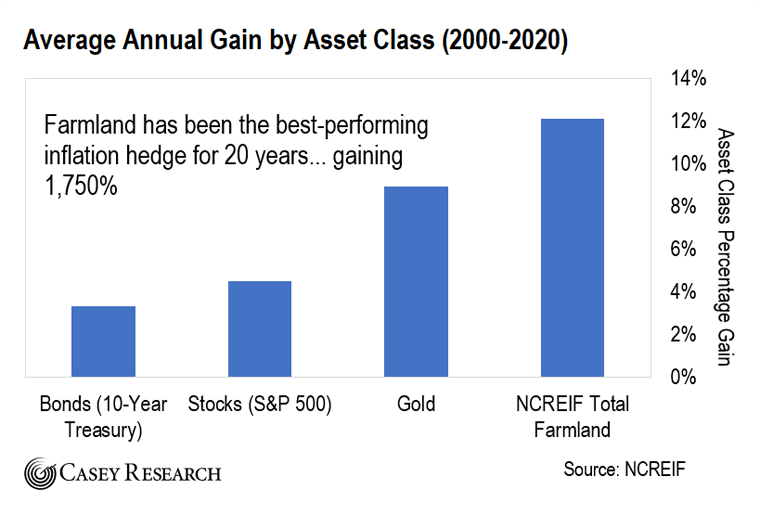 As you can see, it’s averaging a compound annual return of about 12%. That’s more than twice the rate of stocks over the same period.

In fact, since 1992, farmland returned more than 1,750% in total. That easily beats gold’s return of 435%. And more importantly, the NCREIF Farmland Index hasn’t had a single down year for nearly 30 years.

It’s easy to see why. Land tends to appreciate in value over time. In the past five decades, there were only five years where farmland decreased in value. That alone makes it a great inflation killer.

But what farmland does that physical gold can’t is give you income. It’s a double whammy to the face of inflation. That’s why some investors like to call it “gold with a yield.”

So while owning gold is still valuable, owning a farm just might save your wealth – and your family – from runaway inflation.

However, buying a working farm may not be practical for everyone. But the great news is, you don’t need to in order to play this trend.

In fact, my colleague Dave Forest recently put a presentation together to show you how.

At the end of the day, inflation can make a major dent in your wealth… if you let it. Buy farmland, bury some gold, and you’ll have the best of both worlds protecting you and your family’s wealth.