Apple’s share price is now cheaper than one of its iPhones.

A stock split is when a company divides its existing shares, increasing the number of shares outstanding and decreasing the overall share price.

So if you held one $500 share of Apple before Monday, it split into four $125 shares this week.

And Apple wasn’t the only one. Tesla followed suit with a 5-to-1 split.

Both Tesla and Apple said they want to make their stock “more accessible” to regular investors. And that makes sense. The lower the share price, the more people can afford it.

But if you look closer, there’s more to the story than Apple and Tesla are letting on. Below, I’ll get into more reasons why these companies split their stock… and why it’s not as good a deal as it may seem…

On the surface, it makes sense that Apple and Tesla wanted to attract more buyers. Before the split, their stock prices had soared to huge heights, with Tesla shares hitting more than $2,000. That put them out of reach of most everyday investors.

But both companies would benefit from more stock buyers in another way… because it’s essentially free marketing.

Investors – and potential customers – root for the companies they hold shares in. If they have skin in the game, they’re more likely to support that company… buying either more shares, or more products.

So, Apple and Tesla are betting that by attracting more investors, they’ll attract more consumers to their products and services.

It’s a win-win for both companies…

Take a look at this chart of the so-called FAANGM stocks – Facebook, Apple, Amazon, Netflix, Alphabet (Google), and Microsoft – versus the S&P 500 since just before the crash in February. 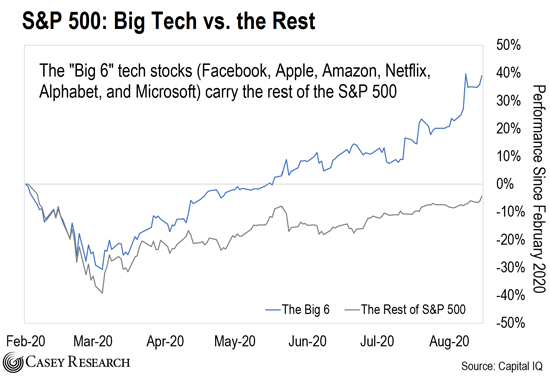 Despite falling with the broader markets yesterday, the Big 6 tech stocks are still up by 39% since February, while the S&P 500 is down 4%.

These tech giants account for 28% of the S&P 500’s market cap. And they’ve dragged this market back to its pre-COVID highs.

We’re seeing this kind of outsized performance in the rest of the tech sector as well. The iShares U.S. Technology ETF (IYW), which holds a portfolio of 166 U.S. technology stocks, is up 71% since the crash in March.

And the ETF’s average trading volume so far this year is more than one-third higher than it was in 2019.

Tesla and Apple know that investors crave them. And they want to soak up as much of that market as they can.

That’s another reason why they did a stock split – to lower share prices to attract a wider pool of everyday investors who are now rushing into the space.

But before you rush out to buy these shares, keep this in mind…

It’s Not Time to Go All-In

But there’s one problem with that, which many investors probably don’t realize.

Just because the stock price appears to be less expensive, doesn’t mean the overall value of that stock changes.

And if you look at Apple’s and Tesla’s market capitalizations, both have increased since their respective split announcements. In other words, the market value of the company did not become cheaper after the share prices nominally went down.

Apple is now 26% more expensive than it was on July 30, when the company first mentioned its split.

And Tesla’s share price is up 48% since August 11, just under a month ago.

This means that their lower post-split prices have absolutely no bearing on how cheap or expensive they really are.

So, while mainstream investors are rushing in to buy big companies like Apple and Tesla that may look like a bargain right now… it’s not the time to go all-in just yet.

But if you’re looking to be more aggressive, there’s another way to capitalize on this trend – that could be even more lucrative than buying one of the tech giants.

My friend and colleague, Teeka Tiwari, has uncovered an explosive opportunity in a little-known sector of the tech industry…

And as a former executive on Wall Street, he’s seen firsthand how the ultra-wealthy can hoard these kinds of deals for themselves… leaving everyday investors behind.

But recently, he’s unlocked a way for you to capture some of these gains.

I can’t get into all the details here. But if you reserve your free spot for Teeka’s event on Wednesday, September 9, at 8 p.m. ET, he’ll reveal everything about this strategy… and how it can help you generate life-changing wealth.

Just go right here to make sure you don’t miss it.