Editor’s note: Here at the Dispatch, we get plenty of readers who tell us to stay out of politics… and only focus on the markets.

But the pros know that if you want to have long-term success as an investor… you can’t ignore what’s happening in Washington.

So today, we’re featuring a special essay from Jeff Brown, our colleague over at Bonner and Partners. Jeff is convinced Donald Trump will win reelection this November… but he says few people understand the impact that will have on stocks.

Below, Jeff explains why he expects another four years of Trump… and what you should prepare for when it happens…

“A win for Donald Trump in next week’s election could take a big bite out of U.S. stocks…”

This claim ran on CNN just days before the 2016 U.S. presidential election.

And leading up to that election, the overwhelming consensus among media pundits was that Hillary Clinton would be the next president of the United States.

But we all know what happened…

The political pollsters… Wall Street analysts… and the mainstream media were embarrassingly wrong.

Donald Trump was elected the 45th president of the United States… and rather than heading lower, as many predicted, stocks moved higher. 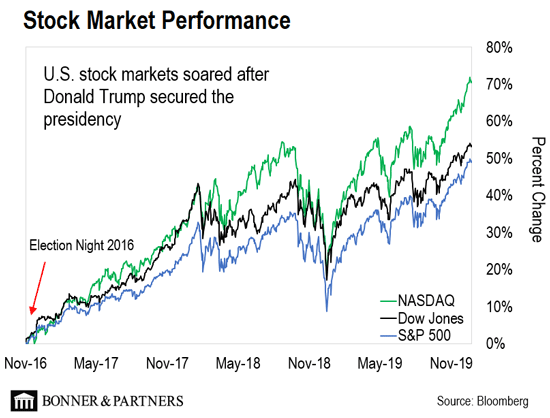 After all, Trump had promised corporate and middle-income tax cuts. He had promised to roll back regulations. And he had vowed to renegotiate unfair trade policies.

And now, today’s economic environment is simply the best I’ve ever seen.

Because of what Trump has accomplished for the economy so far, I’m making a prediction…

As of Super Tuesday, Bernie Sanders and Joe Biden are in a close race to secure the Democratic nomination. But no matter who the Democratic nominee is, Donald Trump will win reelection in the 2020 presidential election. And when he does, it will have important implications for U.S. stocks.

I want to be clear that this isn’t a political endorsement. Whether we like it or not, politics can impact markets. As investors, we need to pay attention to the political sphere.

And from my view, the current economic policies from the administration have been great for the U.S. economy, U.S. equity markets, and investors.

All of this has stemmed from four “economic pillars” pursued by the administration. And we can expect these pillars to continue driving the market’s growth once Trump is reelected. They are:

Let’s look at each pillar… 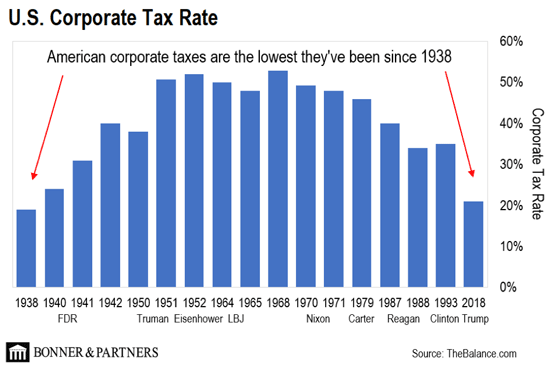 As a result, companies have funds to invest in new equipment, facilities, and research and development. They also rewarded their shareholders in the form of stock buybacks.

Americans got a break too. Middle-income earners had rates cut from 25% down to 22% – the lowest since the 1980s. That’s when President Reagan cut taxes and set off one of the biggest bull markets in U.S. history.

Look at the table below…

What this table shows is the number of regulations issued during the first two years of past presidential administrations. The numbers are striking…

During the first two years of his term, Trump issued just over 4,000 regulations… over 2,500 fewer than Obama or Bush. And when narrowed down to “significant” and “major” regulations?

Both figures for the Obama administration are around double compared to Trump’s.

And keep in mind, many of these new regulations from the Trump presidency were deregulatory in nature.

The Office of Management and Budget estimates that the federal government saved $50.9 billion in regulatory costs. And the Council of Economic Advisers reports that these regulatory efforts will raise real incomes by more than $3,000 over the next five to 10 years.

One of the major promises of “Make America Great Again” was to spur the manufacturing industry to bring jobs back to America. Trump has fulfilled this promise. Look at the chart below…

For years, China has engaged in unfair business and trade practices. That includes theft of intellectual property, distribution of counterfeit goods, and manipulation of its currency.

As a part of his campaign promises, Trump said he would tackle this issue, and he’s followed through. On January 15, the U.S. and China signed phase one of a new substantive trade agreement.

This agreement not only remedies the problems listed above, but basically rewrites how China will conduct business with the Western world. And that is great for the global economy.

And while there is meaningful tariff relief in the phase one agreement, tariffs remain on $360 billion worth of Chinese-made goods. That’s because Trump plans to continue phase two negotiations in his second term.

Trump knows that once he’s won his second term, he’ll be in a strong position to negotiate for an even more comprehensive and fair phase two trade deal between the U.S. and China. And once that is in place, we’ll see the economies of both countries benefit.

If you’ve invested in U.S. stocks, you’ve likely done very well. Even with the recent sell-off, all major U.S. indices are up by large double digits since Donald Trump was inaugurated as president.

In fact, were it not for the uncertainty around COVID-19, I believe U.S. indices would be significantly higher.

I understand investors may be uncertain right now. It may sound strange to be bullish on U.S. stocks after the recent action in the market.

But we are now living through one of the most prosperous economic and investing environments in history. And my analysis shows that this is the direct result of the economic and trade policies the current administration is pursuing.

All of this will result in the president’s reelection in November. I also believe Republicans will retain the Senate and regain the House. Together, this will allow the administration to continue pursuing the policies that have boosted U.S. equities.

Many have been predicting America’s demise for decades. I see a very different picture. The golden age is right around the corner.

P.S. Once the president is reelected, I believe he will move quickly to enact another piece of legislation. And it will help propel the stock market to highs we wouldn’t have thought possible during the Obama years. It will usher in the new American “golden age.”

A handful of technology stocks will be the biggest beneficiaries of this new legislation. I believe they will soar during Trump’s second term. To learn about these “golden age” stocks, go right here.