Rachel’s note: Right now, the economy is in upheaval, and the markets are scary.

If you’re worried about your retirement savings…

Today, he’ll dive into an investing strategy that pays regular dividends throughout the year. He’ll show you how to take these assets to the next level… including a stock to help you get started.

And tonight – on Wednesday, October 19 at 8 p.m. ET – he’s hosting a special briefing about a trading tactic used by some of the most sophisticated traders. Since he started it in 2020, he’s generated thousands of dollars in income… all with minimal risk and through up and down markets.

And just for tuning in, Brad will share one of his favorite recession-proof plays he believes could double from here. So sign up for the upcoming broadcast. You don’t want to miss out.

Is this volatile market scaring you? Or making you worry that your retirement savings will fall apart?

If so, I understand. But it doesn’t have to be that way – even if your portfolio seems to be struggling today.

Some people meet significant roadblocks as they pursue lasting wealth. Yet they achieve healthy retirements anyway in the end.

I can say that because that’s my story. (At least it will be when I reach retirement.) In fact, I hit more than one road bump.

If you’ve been reading Intelligent Income Daily, you know my rags-to-riches-to-rags-to-riches story of how I built up a real estate empire that fell apart during the housing market crash.

But today, I want to share another setback – including advice I wish I had back then on how to reach retirement sooner than later.

You see, my team and I are well-versed in seeking out, analyzing, and identifying the safest, most reliable income. The kind that does the work for you by paying you regular dividends throughout the year.

Below, I’ll show you how to take these assets to the next level… including a stock to help you get started.

I developed commercial real estate for over two decades before becoming a stock analyst.

One of the first shopping centers I ever developed was in my hometown of Spartanburg, South Carolina. And what a challenge it was.

I needed to fit a certain number of stores onto the 10-acre site, which was oddly shaped. So oddly shaped that I had to hire a civil engineer and architect to design several renderings to maximize its rental income.

The result was a 75,000 square-foot retail center, plus three plots for future development. In total, it was an $8 million investment. 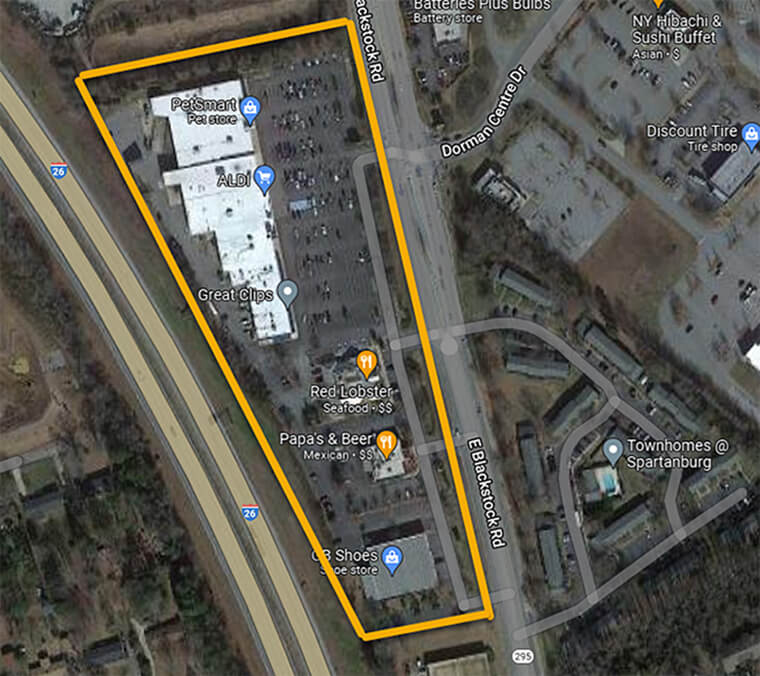 It wasn’t easy fitting everything in properly. But the effort proved to be extremely worthwhile. In its first year, Blackstock Center generated gross rental income of about $1 million.

As such, I made a 10% return on investment (ROI) in the first year alone.

The property is worth roughly $12.5 million today by my estimate and is still 100% leased – over 25 years since I developed it.

I can easily imagine how much I’d be generating in annual income if I’d held onto it – especially now that the debt’s been paid off.

Unfortunately, though, my business partner at the time “did me wrong.” I won’t get into the details – they don’t matter now. I’ll just say the end result was me having to start from scratch.

That’s one reason my retirement plans have been delayed. But it’s also how I learned some life lessons:

Real Estate Investment Trusts: A Safer Way to Own Property

In 1960, Congress passed a wealth-building law that legalized real estate investment trusts, or REITs. These corporate landlords funnel 90% of their taxable intake to shareholders via dividends.

In return, they don’t have to pay corporate taxes.

Because of that, most publicly traded REITs boast high dividend payouts… while still staying in the “safe yield” range. It’s the best of both worlds – and an important investment category for both retirees and those saving for retirement.

Had I invested in strong, stable REITs 25 years ago instead of trusting my unreliable real estate partner…

I could have already retired.

But even all these years later, REITs are helping me rebuild my net worth with safety-oriented returns of up to 15% annually.

Take one of my favorite holdings, Federal Realty Investment Trust (FRT). It’s a stellar stock that owns shopping centers in strategic locations across the U.S.

Rating agencies respect its excellent financial metrics and healthy liquidity of over $1.3 billion. That’s why they give it an A rating on its balance sheet.

Plus, it’s increased its dividends for over 54 years in a row. Few other companies can match that kind of track record.

And shares are extremely cheap right now, giving it a 4.78% yield. FRT’s price-to-funds-from-operations (p/FFO) multiple is now 14.6x versus its five-year average of 21x.

This sets investors up for the very realistic possibility of generating annual returns of 25% or more.

Federal Realty is an excellent building block to retire rich by investing in this great income machine… also known as the REIT.

P.S. Collecting dividends from REITs is one of my favorite ways to build wealth safely. But it’s not the only way… or the fastest.

If you’re looking to do it right the first time and retire with plenty of years left to enjoy life, I hope you’ll learn from my experience.

As we speak, the economy is in upheaval, and we’re on the brink of heading into a recession far worse than the 2008 financial crisis that left me broke.

That’s why my team and I have put together a strategy I wish I’d known about back in 2008. Tune in tonight on Wednesday, October 19, at 8 p.m. ET to learn all about generating income safely in just a few minutes. It’s free to attend.

And to thank you for taking the time to check it out, I’ll share the name and ticker of another one of my favorite plays. This recession-proof investment could double in the next few years. Even if it’s just to get the name of this play, this is a can’t-miss event.