Rachel’s note: Just a few months ago, COVID-19 led to a wave of panic selling that decimated the markets. So it might sound strange to say that the pandemic is now causing a boom in stocks…

But that’s exactly what our colleague and tech expert, Jeff Brown, is seeing in one little-known sector: biotech.

He’s been keeping close tabs on the space, and says record capital is flooding one area… and creating a once-in-a-lifetime wealth-building opportunity. I’m talking up to 1,000% gains – in just one day.

But things are changing fast. And if you don’t act quickly, you could miss the boat. That’s why tonight, at 8 p.m. ET, Jeff’s hosting a “masterclass” where he’ll share all you need to know about this sector… and reveal some of the most lucrative bets. But only if you reserve your free spot here.

I remember it to this day…

A little-known financial asset was gaining the attention of a niche group of investors.

It promised independent financial transactions without the need for a “trusted” third party. It was being compared to gold and silver but was infinitely more transportable.

But even more interesting, the asset had just come off an incredible run, climbing more than 600% in just a few months of 2013.

I’m referring, of course, to bitcoin.

At the time, bitcoin was not well understood. It certainly was not yet plastered all over Bloomberg and CNBC.

So in June 2015, I published a write-up on bitcoin. I titled it “What’s the Big Deal With Bitcoin?”

In that editorial, I explained how bitcoin operated, how blockchain technology supported it, and why it was progressing so quickly. I even encouraged interested readers to “dip their toes” into cryptocurrency and buy a few bitcoins.

At the time, the cryptocurrency was trading for about $250. Buying several bitcoins would have been manageable.

We all know what happened next…

Investors who listened to me all those years ago made an outstanding return in the span of just a few years.

I mention this story because I believe we are gearing up for a bull market that will rival bitcoin’s in 2017.

But this bull market has absolutely nothing to do with cryptocurrencies.

Instead, it’s happening in a technology sector that has traditionally been overlooked.

A Golden Age of Biotech

The technology I’m referring to is biotechnology. And the 2020s will be the decade of biotech.

When we think of biotechnology, we probably imagine scientists in white lab coats, peering at specimens under a microscope.

That may have been the case at one time, but not anymore.

Biotechnology is nothing like it was 20 years ago. It is moving much faster now. And the field of biotechnology encompasses a much larger range of technologies than it used to.

There has been a dramatic increase in computer processing power over the last 20 years.

And when you include powerful artificial intelligence and machine-learning software, innovation is happening at a pace that was unforeseen even just a few years ago.

And it is not just about developing individual therapies. Biotechnology companies are building technology platforms to aid in drug discovery. They are using semiconductor technology to accelerate the analysis of proteins and enzymes.

At the same time, there has been an explosion in genetic data from human DNA. And we can now apply artificial intelligence to help us understand the complex relationship between our genetic material and disease.

All of this would be reason enough to take an interest in the biotechnology sector. But earlier this year, something unexpected happened. It was, of course, the COVID-19 pandemic.

And it changed the course of biotech forever.

It may sound strange to say that COVID-19 has caused a “boom” in stocks. After all, the virus was chiefly responsible for the fear-induced selling we saw earlier this year.

But when it comes to technology – and specifically biotechnology – that’s precisely what’s happened. Because of COVID-19, the world has woken up to how powerful modern biotech can be.

Back in March, an early stage biotech firm AbCellera did something that many people thought was impossible.

AbCellera received a blood sample from a patient who had recovered from COVID-19. The company used artificial intelligence (AI) to screen more than 5 million immune cells in that sample. And it identified about 500 antibodies that helped the patient fight off the virus.

Identifying these antibodies could be the key to treating COVID-19. AbCellera used this as a starting point to create an antibody therapy to potentially cure COVID-19.

Historically, this process would have taken years to accomplish. So how long did it take AbCellera? Just 11 days. Beyond incredible.

And the industry took notice…

Pharmaceutical giant Eli Lilly rushed to partner with AbCellera. They worked on a treatment using these antibodies.

And in June, AbCellera sent its COVID-19 antibody therapy to clinical trials. It was the first company to do so.

Make no mistake, this is revolutionary work. Until just recently, this entire process would have taken years. But AbCellera pulled it off in just four months.

In all my years as an analyst, I’ve never seen this type of speed from the biotech industry. And it’s thanks in large part to COVID-19. The virus has lit a fire under biotech.

And the venture capital community is starting to notice…

A Tsunami of VC Funding

Have a look at this chart. 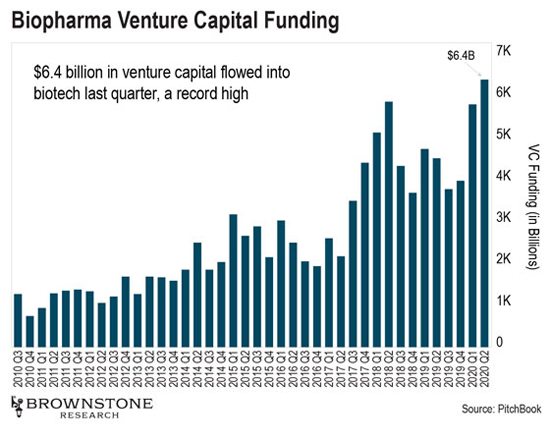 This chart tracks the amount of venture capital flowing into the biotechnology and pharmaceutical industry.

$6.4 billion in venture capital (VC) flowed into the biotech industry this past quarter. That makes Q2 2020 the industry’s single best quarter in history for VC funding.

And that’s just the start…

And if we include secondary offerings – the sale of new shares by publicly traded companies – the biotech industry raised a whopping $24 billion in Q2 2020.

That’s an incredible amount of capital flowing into the space, all while much of the global economy was forced into economic lockdowns. Biotechnology conferences, medical symposiums, and analyst events didn’t happen, and it was still a record quarter. Incredible.

Why is this happening?

Private capital sees what I see. Biotechnology is gearing up for a massive run in the years ahead. And this “smart money” is taking its position now.

How to Profit From the Biotech Boom

Back in 2015, I’m sure plenty of readers were skeptical when I recommended buying a modest amount of bitcoin. I’m sure several readers ignored that advice. And I’m certain they regret it now.

If you missed the boat on bitcoin in 2015, then pay close attention.

I believe the level of awareness for biotech among investors will rival that of the cryptocurrency boom in 2017.

The returns we will see from quality biotech companies will create lasting, generational wealth.

For investors, the time to get exposure to quality biotechnology stocks is now. Right now.

During this free event, I’ll take you to the epicenter of biotech innovation: Cambridge, Massachusetts, home of MIT.

And I’ll also reveal details about a little-known biotech stock with blockbuster potential. I believe this stock could soar up to 1,000% in as little as one day.

If investors only ever buy one biotech stock, it needs to be this one.

Go here to reserve your spot for the event.