Tom got our attention when we heard he likes to go “all in” on his favorite ideas. And it’s paid off… like when he bought bitcoin back in 2011 for under $10 (it’s trading around $9,500 at writing). And now, he’s betting his life savings on the gold bull market.

But about two years ago, he made his boldest decision yet. He and his family left their life in the States behind and hit the road for a trip around the globe.

As Tom will tell you below, it was a life-changing experience… but it was about more than just seeing the world…

I used to dread Friday afternoons. That’s when my ex-wife, Kate, would drop off the kids at my apartment for their scheduled weekend with Dad.

Once I had them, I’d watch the clock the whole weekend until I could get rid of them again on Monday morning. If I returned them to Kate without anyone getting hurt, I considered the weekend a success.

I’d give them each an iPad on Friday night. They’d have unlimited screen time in my apartment until Monday morning.

I’m not proud to say this, but I was a babysitter, not a father.

It wasn’t any different before, either, when Kate and I were married. I was so stressed about work, I was never mentally present. Even on the weekends, when I didn’t have work, I’d be in my own little world, either fiddling with my phone or watching television while Kate played with the kids.

“Having kids was supposed to be the greatest joy in life,” I thought. “So why does it feel like such a chore?”

I now realize I had no connection with my children. No wonder I felt like a babysitter…

Most importantly, when we were on the road, there was no work stress or any other drama going on in the background. Just day after day of fun and adventure. “The Endless Vacation,” we called it.

Here we are in Egypt, with the Sphinx behind us… 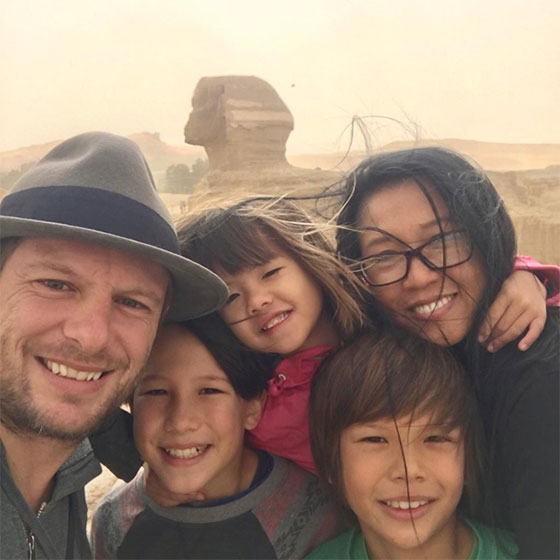 Checking out the Great Sphinx of Giza

And here we are walking around Xi’an, China (we stayed in an old army barracks that’s over 1,000 years old)… 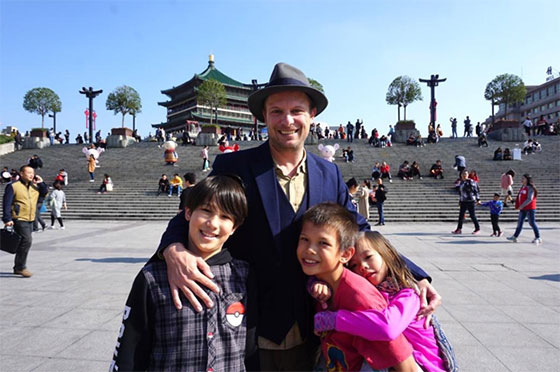 At first, we found it exhausting to be in such close proximity. I wasn’t used to it. I don’t think any of us were. There was a brief adjustment period.

Then one day, I noticed we were laughing almost the whole time. We were playing together. We were telling jokes. And stories. The kids were making fun of Dad. We were playing card games. We were even having long conversations about economics!

I realized this was how fatherhood should be!

As the trip went on, I started to notice little things about the kids I’d never noticed before… and I started to see how different they were from each other. I don’t think this would have been possible without living every day for an entire year in each other’s pockets.

The challenge of traveling around the world brought us together, too. We had to pull together… and look out for each other… and encourage each other… on the long journey through sometimes challenging places like India and Rwanda.

We were like a little wolf pack, or a pioneer family on the frontier 200 years ago… all for one and one for all.

I’ve never been on a successful football team or anything like that, but now I can imagine what the camaraderie feels like. Except I got to experience it with my own children.

Here we are in India… 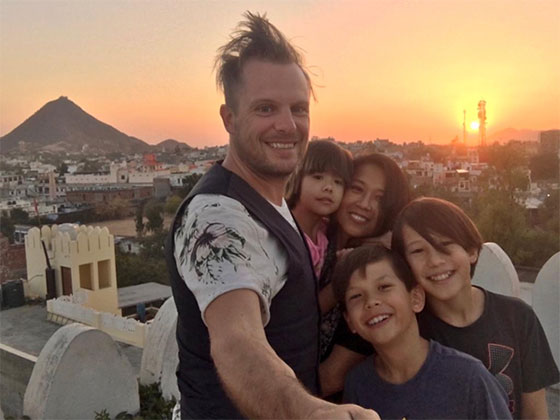 With Kate and the kids in India

I read a blog post recently titled “The Tail End.” The writer looked at the total number of days he will get to spend in person with his parents over his lifetime, assuming he continues to see them about five times a year and both his parents survive into his sixties.

“It turns out that when I graduated from high school, I had already used up 93% of my in-person parent time,” he says. “I’m now enjoying the last 5% of that time.”

This insight made me sad.

First, I thought of my own parents. Even before this lockdown started, I’d see them less than five times a year. Usually about twice a year. They’re getting older now, and both of them have Parkinson’s disease. I’m probably into the last 2% of the total time I’ll get to spend with my parents.

Then I thought of my kids. We may have only 10 more good years of living under the same roof and seeing each other every day. After that, they’ll leave home, and I’ll probably see them a lot less. As the blog writer points out above, I will have used up something like 90% of our time spent together by then.

The bottom line is, I have a lot less time to enjoy my kids than I realized. Can’t waste it anymore.

That’s the thing about our trip. It’s been a great adventure. When we explore new places, the kids get a great education. But the real magic is in how it has transformed the relationships we have with each other and brought us all together.

“We meet people everywhere we go,” I told someone when we were in China. “But for us, this trip was never about meeting other people. It was about meeting each other.”

And that’s why – no matter what happens next in life for us – I know I’ll never regret the decision to take this family sabbatical.

P.S. This Wednesday, May 20, I’m hosting a special presentation where I’ll share all the details behind what I believe could be biggest money-making opportunity for the next 20 years. Go here to register for free.