Four-and-a-half years ago, I noticed something extraordinary about the global elite’s annual meeting in Davos – a conference attended by CEOs of the largest companies, leaders in the mainstream media, and top academics.

There was an enormous acceleration to eliminate paper cash.

The CEO of Deutsche Bank was calling for the elimination of cash. Norway’s biggest bank did the same thing.

Bloomberg published a piece called “Bring on the Cashless Future.” The Financial Times published something remarkably similar. Then, Harvard put out a paper talking about the need to eliminate high-value paper currencies, like the $100 bill and the €500 note.

To the casual observer, it may have seemed like a bunch of unrelated articles and academic studies.

But it was clear to me this was a coordinated – but secret – effort by some of the most powerful people in the world to bring about a cashless society.

If that were to happen, the government would have complete knowledge of – and control over – every transaction you make. If you’re disobedient, they would be able to turn off your ability to transact at the push of a button. Or they could simply charge your account.

At that point, governments will have almost unbreakable control over the individual.

In short, the cashless society is a totalitarian’s dream. It’s precisely the opposite of how a free society should work.

I’m not going to mince words. The War on Cash is evil. It’s an all-out assault on your liberty.

The End Game of the Elite’s Master Plan

Exploiting crises has long been the modus operandi and ethos of the many sociopaths that fill governments. A crisis lets them do things they otherwise couldn’t do.

The US is facing a global pandemic and the biggest economic crisis since the Great Depression. And you can bet the government’s not going to let it go to waste.

They’re making the final moves to usher in a cashless society… to give themselves total control.

That 95% reduction in interest income is thanks to the Federal Reserve manipulating interest rates to the lowest levels in human history – far below what they would be under a free market.

But it’s still not enough for their insatiable appetite. They want negative interest rates.

Negative interest rates mean the debtor gets paid to borrow money, and people have to pay to save money. It’s bizarre, perverse, and completely backwards.

You don’t need to be a financial expert to see that negative interest rates don’t make any sense at all – they’re a swindle.

Let’s be clear and descriptive. Negative interest rates are a government-imposed tax on saving money.

Nothing Can Stop This Economic Poison

For years, I have warned my readers about the dangers of the War on Cash. I predicted it would pave the way for governments to impose a tax on saving money. Today, I think it’s an imminent reality in the US.

Negative interest rates have already infected Europe and Japan, and are spreading around the world like a virus.

You’re seeing it [negative interest rates] pretty much throughout the world. It’s only a matter of time before it’s in the United States.

President Trump has repeatedly called for negative interest rates. So have countless other prominent people in government, academia, and the media. The calls for this economic poison are only growing louder.

Here’s the bottom line: Negative interest rates are coming to the US, and there’s nothing we can do to stop it.

Fight Back With Financial Kryptonite

But there’s one thing the proponents of a cashless society all hate: gold.

But it’s much more than that. Gold also offers you a way to profit at the same time.

Why would anyone buy a negative-yielding bond, or get penalized for savings with negative interest rates, when they can buy gold instead?

In the chart below, we can see a very high correlation between the price of gold and the outstanding amount of negative-yielding debt.

The two track closely, which illustrates the point I am making about negative rates making gold more attractive. 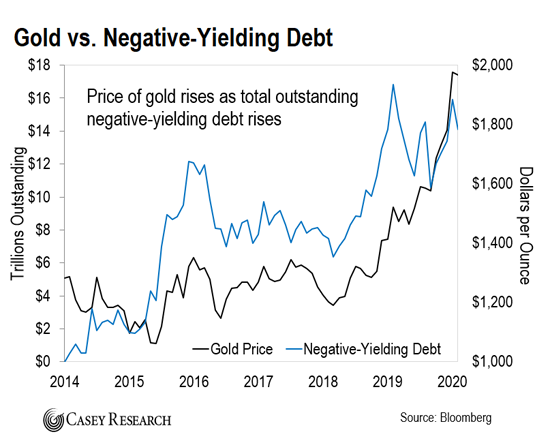 There’s another critical reason why negative interest rates are coming.

Remember, the US government is the biggest debtor in the entire world. Paying artificially low interest costs has been a tremendous benefit.

The US government cannot afford to pay the market rate of interest on its nearly $27 trillion debt.

Suppose interest rates go back to 4.5% – their long-term average. That would mean the US government would be paying over $1.2 trillion each year in interest alone. For comparison, the Department of Defense’s budget is about $700 billion.

That’s how artificially low – and negative – interest rates help the US government conceal its bankruptcy.

Because of the skyrocketing spending financed by debt, the US government is hopelessly dependent on lower and lower interest rates. That means we are going to see increasingly lower – and negative – interest rates until the financial system collapses.

Already the price of gold is skyrocketing. It decisively took out its previous all-time high of around $1,914 and shot through $2,000.

I think there’s an excellent chance that gold could exceed $10,000 as this all plays out.

That’s about a 5x return from here just on the price of gold. I think that could prove to be too conservative. It’s in line with how previous bull markets turned out – and the current bull market we’re in is likely to be much bigger.

That’s why I’m urging readers to position themselves now. Owning some physical gold – and keeping it in your own possession – is step one. It’s something everyone should do.

P.S. The War on Cash is one of the biggest crises we’re facing today. It’s an underhanded play… aimed at Americans’ hard-earned savings.

And I don’t want you to be blindsided.

That’s why I put together this urgent briefing, where I go over all the details you need to know about this swindle… and how you can protect yourself and your family. Go here to access it.