Dealmaking is picking up in the most unlikely of places…

I say “unlikely” because practically no one’s talking about commodities.

There’s a reason for this, of course.

See for yourself. This chart shows the performance of the CRB Commodity Index, which tracks a basket of commodities, since the start of 2017. 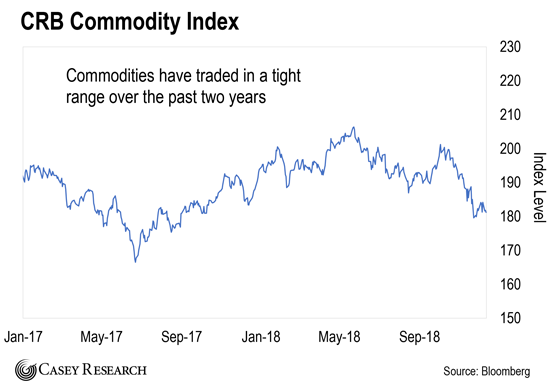 As you can see, commodities have basically traded sideways over the past two years.

Now, it’s true… Certain commodities have shown signs of life this year. Natural gas, for one, is up 42% since last December. Wheat prices are up 23% over the same period. And palladium has gained 12%.

But most commodities have barely budged or, worse, are in the red for the year.

Because of this, the average investor wants nothing to do with commodities.

• And that’s exactly why they deserve a look…

You see, the best opportunities are rarely in industries that everyone’s excited about. Instead, they’re hidden in pockets of the market that no one’s talking about.

But that will likely change very soon…

• Industry insiders have been gobbling up resource assets left and right…

Since August, more than $100 billion has gone into mining mergers and acquisitions (M&A). That’s more than double what we saw flow into the mining space during the first seven months of the year. Year to date, there have been a total of 4,645 M&A deals in the mining space.

We simply can’t ignore this as speculators.

Just consider what happened to Northern Empire Resources over the summer. Its share price jumped 11% on August 2, after Coeur Mining announced that it was going to pay a 40% premium to acquire the company.

The same thing happened with Brio Gold in January. Its stock jumped 50% in a single day after Leagold Mining said it was going to pay a 57% premium to acquire it.

Then, there’s Exeter Resource Corp. Its stock railed 54% when Goldcorp made a move on the company at a 67% premium last year.

• Every speculator dreams about getting in front of deals like this…

But that’s not the only reason I wrote this essay…

According to International Speculator editor Dave Forest, an uptick in M&A activity is also a classic sign of a bottom in the commodities markets.

Dave is our in-house geologist. He travels all over the world to uncover the best money-making opportunities. His recent visits include Brazil, Myanmar, Colombia, and Hong Kong, just to name a few. 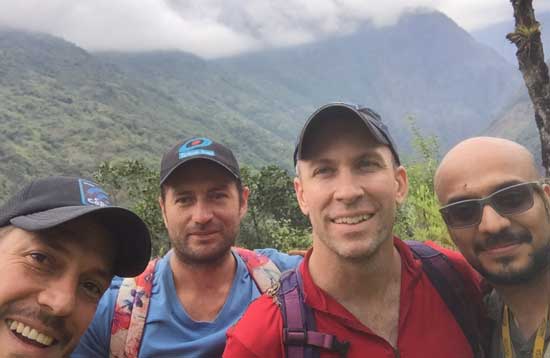 Dave (second from right) in the Colombian mountains

All of this boots-on-the-ground research helps Dave keep his finger on the pulse of the global resource market. And he says M&A activity in the resource space is picking up rapidly:

The pace of resource M&A has accelerated in recent weeks. For example, Barrick and Randgold – two of the world’s biggest gold miners – announced the largest mining M&A deal since the 2013 downturn in gold prices. The two companies will merge together in a deal worth $6.5 billion.

And that’s just one of several blockbuster deals to close recently. 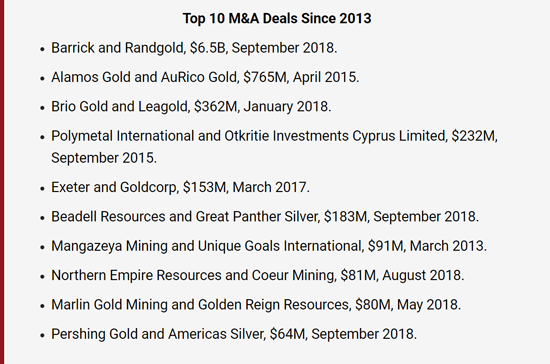 This isn’t a coincidence.

That’s because companies take advantage of poor sentiment by acquiring new resources for less than it would cost to discover and develop new deposits themselves.

Put another way, resource companies are buying each other out… because it’s cheap to do so. That tells us industry insiders could be gearing up for a resurgence in the resource market.

But there’s another reason you should consider speculating on commodities.

You can see what I mean in the chart below. 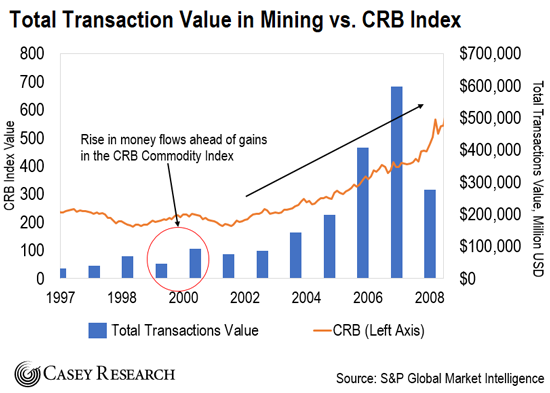 Notice that there was a big spike in inflows in 2001… just before a spectacular rise in commodities prices kicked off in 2002.

The CRB index went on to rise 142% over the next six years.

Many individual commodities did even better. Oil, copper, and nickel all soared more than 350% during the same timeframe.

These are tremendous gains. But you could have done even better buying the top mining stocks.

In other words, commodities prices don’t have to move much for mining companies’ shares to shoot through the roof.

So consider speculating on mining stocks if you haven’t yet. You can easily do this with a fund like the SPDR S&P Metals and Mining ETF (XME). This fund invests in a basket of mining companies.

That makes it a relatively low-risk way to speculate on a commodities rebound. That said, even betting on a basket of mining stocks is risky.

So, only bet money that you can afford to lose. Use stop losses. And take profits when they come.

P.S. I also encourage you to sign up for Dave’s advisory, International Speculator. Dave has a portfolio of the top mining stocks set to soar during the “buyout mania.” And that’s not the only money-making opportunity you can take advantage of… Dave just released a new video about a breakthrough in electric vehicle tech that needs to be on your radar today. Watch this video presentation to learn more.

Are you already speculating on commodities today? If so, share which ones you’re betting on – and how it’s going so far – right here.

Right now, there is a small group of investors collecting income in the crypto market – whether it’s up… down… or sideways. It doesn’t matter.

You can learn exactly what this group is doing right here… 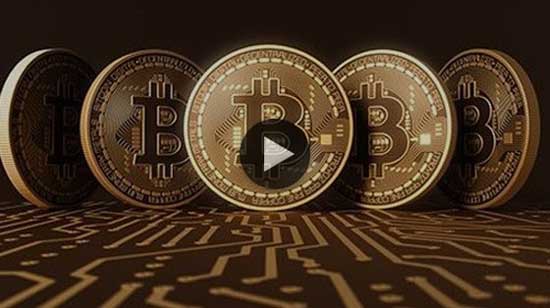