Who wouldn’t want access to a resource that can “see” into the future?

A resource with a history of making timely and important forecasts.

One that not only sees where things are heading… but which offers solutions to profit from those forecasts.

It’s in the stable of publications inspired by the founder of our business, Doug Casey.

In today’s Dispatch, we’ll recall one of Doug’s most prescient forecasts, and how it foretold one of today’s biggest and potentially most lucrative investment ideas…

If this is your first time here, welcome to the Dispatch. If you’re a regular reader, welcome back.

We have two main goals:

Today, we’ll return to a subject that forms one of the foundations of the Casey Research expertise – science and technology…

Many folks associate our founder, Doug Casey, with macroeconomics and commodities. They’re right to do so.

But one of Doug’s biggest interests is science and technology.

In fact, it’s one of the foundation stones for the Casey Research business… with a long history of making prophetic calls about the future of technology.

For instance, back in April 1991, Doug wrote to his subscribers about the relatively new cell phone technology:

I’m a believer in the future of electronic technologies in general, so naturally tend to see less risk than the market at large… It’s true that some people see cellular as a fad, or a status symbol; but that was true of TV in its early days, and had nothing to do with that medium’s future. It’s also true that as the economy heads down many will economize, and use their phones less; but, on the other hand, cellular is a great anxiety reliever, and I suspect it will be surprisingly resistant for that reason.

Doug was even on the right track when he associated cell phones with anxiety! Also bear in mind that this was more than a year before a software programmer at Vodafone sent the world’s first text message.

There’s no doubt that the explosion in computer/telecommunications/electronics technology that we’ve seen over the last decade will not only continue, but accelerate. This area of technology will literally shape the future, and you want as much participation as you can get…

Interactive will basically allow you to use your TV as a total communications system – buying, banking, polling, playing real time games, and much more; it’s going to be incredible. TV will become a “smart” medium, not just a tube you watch passively.

We’re not claiming Doug invented the concept of “smart TVs.” But we do say that he was one of the first to push the idea.

It’s this kind of forward-thinking that sets Casey Research apart from others in the financial newsletter business.

It’s also why we’re so excited about the technological advancements happening right now.

Just the Beginning of This Tech Trend

On its own, 5G is just hardware… and software…. and waves… that help transfer data.

The development of 5G tech will allow some incredible innovations. You’re probably familiar with some of them – self-driving cars, pilotless aircraft, robotic delivery systems.

But it’s foolish to think the technology will end there. Technology will keep moving further ahead. And thanks to 5G, new technologies will play an even bigger role (for the better) in everyone’s lives.

From things like self-driving cars and pilotless commercial aircraft, to applications as diverse as remote medicine and virtual reality entertainment.

All of these things require the tech that 5G allows – the almost instantaneous transfer of data and information from one place to another. And it can do so in an entirely wireless environment.

But it does have one problem. A “flaw” that, without a specific solution, will stop 5G in its tracks. That flaw is the difficulty 5G has working indoors. A basic, but fundamental problem.

It’s a subject that Casey Research veteran Dave Forest has followed extensively. Fortunately, there is a cure for that flaw. A cure that will make sure the next generation of technological advances continues for years to come.

It’s an exciting time… with innovations for the future that many will find difficult to comprehend today. You can find out more about the 5G revolution and the technology that will ensure its success right here.

P.S. For more evidence that now is a great time to play the 5G trend, check out chartist Imre Gams’ analysis of a popular 5G exchange-traded fund (ETF) below. We always prefer individual stocks. But ETFs can be a great way to get broad exposure to key trends. See below…

As 5G infrastructure continues to mature, it will be life-changing for tens of millions of Americans.

The VOX ETF we looked at last month is a great way to play 5G. It includes service providers like Verizon (VZ) and Comcast (CMCSA), as well as cloud computing titan Alphabet (GOOG). It’s one of the largest telecom ETFs available, with over $3 billion in assets under management.

But one of the amazing things about 5G is that there are many ways to invest in this technology. For example, you can get exposure to blue-chip service provider ETFs like VOX. But you can also get exposure to 5G by playing a more specialized niche…

In today’s Chart Watch, we’ll be taking a close look at the Defiance 5G Next Gen Connectivity ETF (FIVG). Unlike VOX, which casts a very wide net, this ETF focuses on the companies that are building the infrastructure and the equipment that will power 5G connectivity.

FIVG is a growth-oriented ETF. It includes names like Ericsson (ERIC) and Nvidia (NVDA).

And its price chart is very compelling. Let’s look at it now. 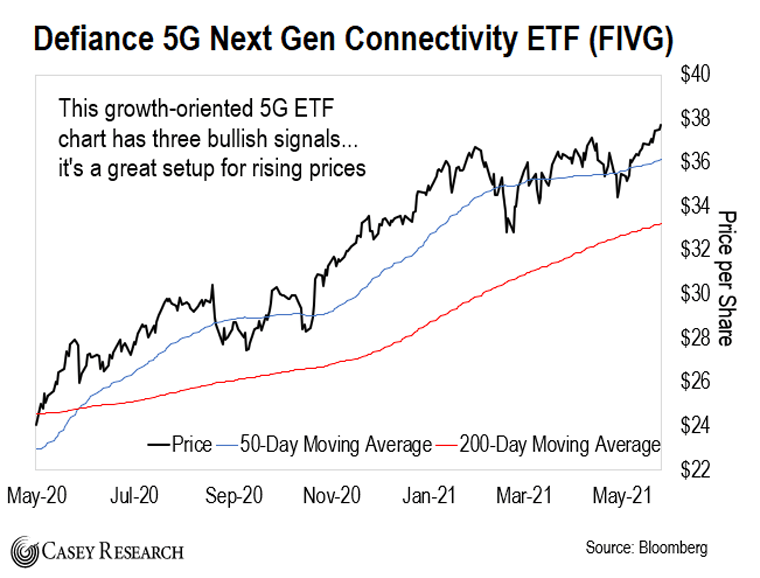 This chart has three bullish signals:

There you have it. Technical analysis is at its best when it is clean, simple, and easy to understand. And price charts don’t get much cleaner, or simpler, than FIVG.

So not only are there great fundamental reasons to play 5G, but the technical set-up looks great, too.

Of course, if you prefer individual stock exposure (as we do), you can access Dave’s research on the best stocks to own in this trend here.