Nobody seems to notice the funny-looking green pole on the corner of 17th Street and Glenarm Place in downtown Denver. It’s one of dozens dotting the city.

The green pole is a 5G cellular antenna. If you don’t already know, 5G (or fifth-generation) cellular technology is about to transform the way we communicate. It will replace our current wireless network infrastructure and open the doors to new capabilities… along with immense profits for those who know how to get exposure.

That’s why I traveled to downtown Denver to investigate this trend myself. Here I am standing in front of one of those 5G poles. 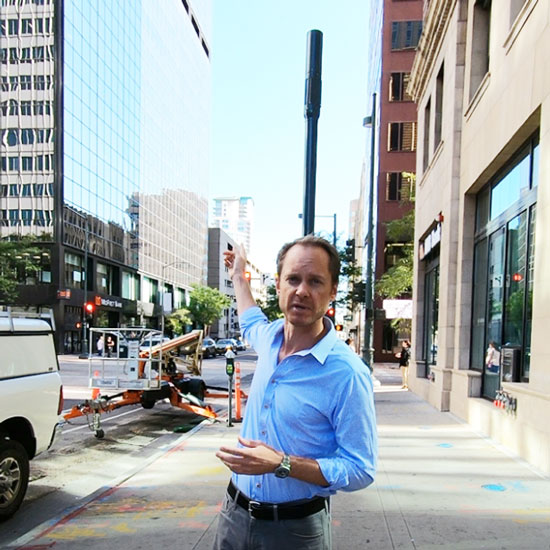 E.B. in front of a 5G pole in downtown Denver

Now, if you have a 4G smartphone, the pole’s signal is useless to you. But if you have a 5G-enabled smartphone, being near this pole gives you download speeds 100 times faster than what’s available using a 4G signal (and I’ll prove it down below).

Sounds awesome, right? Not so fast. There’s one big problem with this pole that no one is telling you about… and 5G can’t take off until this problem is solved.

Today, I’ll tell you all about this fatal flaw in 5G… and why it represents a huge opportunity for savvy investors.

But first, let me show you why you need to be paying attention to 5G…

According to Statista, about 2.71 billion people around the world use smartphones. The GSM Association, a trade organization representing mobile network operators, estimates 5.13 billion people have some sort of mobile device using one of the 8.97 billion mobile connections worldwide.

In the coming years, those numbers are set to explode higher. Swedish telecom company Ericsson estimates that we’ll have around 29 billion connected devices by 2022.

For instance, the new generations of smartphones are coming loaded with ultra-high-definition capability. It’s what we call 4K resolution. Streaming a movie in 4K requires four times the amount of data that current phones can handle. And our current 4G network can’t handle that much data.

But the 5G network can. That’s why we’re seeing poles, like the one we showed you in Denver, pop up in cities across the country.

2G worked well for calls and text messages. 3G allowed you to send a photo to a friend… slowly. With 4G, you could view your Facebook newsfeed or browse Amazon.

And with 5G, you can download an entire HD movie in seconds.

If you’re skeptical, so was I. That’s why I decided to test out 5G myself…

We bought my Strategic Investor analyst a brand-new Samsung Galaxy S10 5G smartphone. It looks and functions a lot like his old Samsung Galaxy phone. The difference is his new phone connects to the signal coming from the green poles in downtown Denver.

We decided to download one of my favorite movies, Gone with the Wind, onto his new 5G phone and my 4G phone. This movie is nearly four hours long, which means it has a huge file size that can take a while to download without a Wi-Fi connection.

You can watch a video of our experiment by clicking the image below. 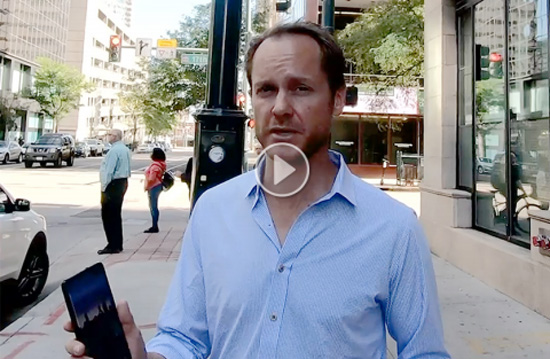 Connected to 5G, my analyst’s new smartphone downloaded the full-length version of Gone with the Wind much faster than my 4G phone. In fact, it finished downloading the entire movie in less than two minutes.

Meanwhile, my 4G phone downloaded less than 1% of the movie in the same time. At that pace, my analyst would be halfway through the movie before my phone completed the download.

There’s a key difference between 4G and 5G signals that can explain this.

Radio waves vary from long arcing signals (think CB radios) to very short signals with little space between arcs. 5G signals are some of the shortest.

This short space between arcs means the signal is more powerful. And that means 5G packs more data into a signal than any cellular service.

5G also reduces latency, the time it takes for a signal to travel from sender to receiver. The lower the latency, the faster the network.

This is the power of 5G. But even with this capability, there’s one obstacle holding it back…

This is the fatal flaw of 5G that few know about.

Once you walk just 50 or 100 feet away from any of the green poles dotting downtown Denver, the 5G signal disappears. And you’re back on regular 4G.

That’s because the powerful 5G signal struggles to penetrate walls, trees, and other obstructions.

Because of this, 5G phones only work when you’re in sight of one of the funny green poles. In Denver, that means standing outside on the sidewalk to access the powerful signal.

Practically speaking, it means cellular service providers need to install thousands of 5G antennas before the technology can take off.

Like I said before, there are dozens of these poles in downtown Denver right now. Soon, there will be hundreds, and eventually, thousands. But it’ll take years and billions of dollars to build out the full 5G network nationwide.

Companies like Verizon and AT&T are committing vast amounts of money to do this. But while these big telecommunication companies may get all the headlines in the press, it’s the device makers that will allow 5G to reach its full potential.

Instead of focusing on telecommunication giants, investors should look into the picks-and-shovels of the 5G revolution. That means companies that build the parts that make the 5G network functional, like the components used in the green poles.

These firms will be critical to the 5G rollout, and now’s the time to grab shares before the 5G trend kicks into overdrive. Just remember that you only need a small stake for life-changing gains, and never bet more than you can afford to lose.

And tomorrow, I’ll tell you more about the 5G revolution… and a radical solution to 5G’s fatal flaw that you’re not hearing about…

P.S. During my trip to Denver, I didn’t just put 5G to the test – I found the one company that’s come up with a brilliant solution to the 5G problem.

And 5G is no different. In fact, shares of this company could climb 9,700% as its “Master Key” helps 5G become a reality.

But time is running out. This tiny stock won’t stay cheap for long. Go right here to learn all the details.