Last year, the United States Postal Service (USPS) decided to road-test a fleet of unusual trucks between Phoenix and Dallas.

If you happened to spot these trucks on the highway, they probably didn’t look too out of the ordinary. After all, they each had two people in the cab.

But neither was actually driving the truck.

Instead, the Post Office was deploying cutting-edge technology to allow the trucks to drive themselves (with two people behind the wheel as backup).

These “driver-assisted” models are the first step toward the goal of using fully operational automated trucks someday to deliver the mail.

But that won’t be possible without upgrading our current network to the next phase, called 5G.

Driverless trucks are just one example of how the coming 5G revolution will change our lives. Today, I’ll go over how 5G will make the technology of our dreams possible… and why it’s an investing trend you can’t ignore…

Connecting Devices That Will Change Your Life

If you’re like most people, you’re probably looking at the coming 5G buildout the wrong way…

It’s true that 5G will enable speeds on your phone like we’ve never seen before. You’ll be able to download entire high-definition movies in seconds.

It’s about connecting devices that will change your life.

It’s what we call the Internet of Things (IoT). Things like health-monitoring devices, safety equipment, and even remote surgery will function on 5G.

And this tech can’t exist on today’s 4G network.

Just take a look at all the technologies that 5G will enable – stuff that was only possible in science fiction: 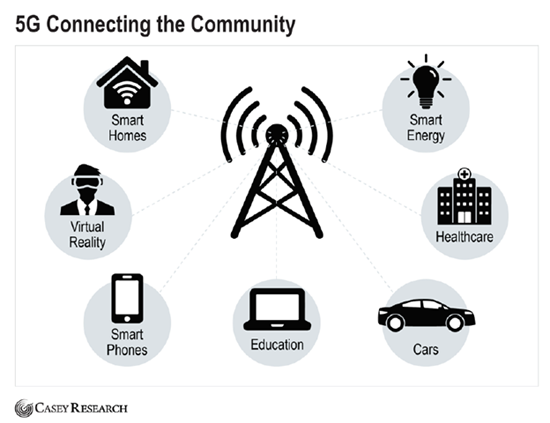 How Can All This Benefit the Postal Service?

You may be wondering why the USPS would even want to use driverless trucks.

Keep in mind, it spends $4 billion per year on long-haul trucking costs. That amounts to 5.4% of total annual Postal Service operating expenses.

The USPS needs that cost to go down. That’s why it’s testing driverless vehicles. Once it’s got this tech down, it won’t have to pay contractors $65,000 per year to drive the same stretch of highway.

What the Postal Service doesn’t mention is automated trucks are not possible – yet.

The driver-assisted features can’t function yet without humans behind the wheel. That’s because programmers realize the sensors on the truck can’t send and receive data fast enough to react to real-life situations on the road. Because they’re still operating over the 4G network.

With the existing technology, the systems in testing are more like the radar-enhanced cruise control in a new car. That system only works well on a thinly traveled freeway. It expects a driver to grab the wheel if anything outside of convoy driving pops up.

Automated, or “driverless,” vehicles can’t function on the current 4G cellular data network your phone uses to connect, because of something called spectrum.

The spectrum is the length of the wave where information travels. The longer the wave, the lower its power.

Think of CB radios. They operate on a very low spectrum, less than one gigahertz (GHz). The signal sent and received from a CB is effective but crude. There’s not much power behind it.

5G needs a spectrum as high as 39 GHz on average.

Simply put, 5G connectivity is not possible on the existing cellular network.

That means an entirely new infrastructure needs to be in place before the Postal Service can move forward with its plan to use driverless trucks… and before any of these technologies shows up in your everyday life.

The good news is, the buildout of that infrastructure is already underway.

The technology of tomorrow will not function on today’s network. But a functioning 5G network means today’s popular technology ideas, like driverless cars, will no longer be impossible dreams. Analog devices used in everything from health monitoring to forestry work will connect on a 5G network.

The stuff of science fiction is about to be reality.

And since these devices can’t work on the existing 4G network, it means billions in spending to erect a new one. It’s why smart investors are buying up shares of companies related to 5G.

But not every company in the space is worth investing in.

While big telecommunication companies like Verizon or AT&T may get all the headlines in the press, it’s the device makers that will make things like driverless cars possible in a 5G world.

So focus on the “picks-and-shovels” of the 5G revolution. That means companies that build the parts that make the 5G network functional.

In order for movies to download in seconds… pacemakers to talk to hospitals… and driverless cars to scan the road and make rapid decisions, many other devices have to be involved.

Demand for these cutting-edge components from smaller, lesser-known companies is set to take off as gadgets that can’t function without 5G become part of our daily lives.

One of those components is a piece of technology called a semiconductor. They’re used in everything from your smartphone to self-driving cars today. And as 5G spreads to more and more devices, they’ll be crucial to making sure any new tech works on the 5G network.

That’s why if you want an easy way to take advantage of 5G, you can take a peek at the VanEck Vectors Semiconductor ETF (SMH). With a handful of companies tied to the semiconductor sector, it should benefit as 5G begins to take off.

Of course, you’ll want to position size appropriately, and don’t bet the house on a single trade.

P.S. Like I said above, it’s the overlooked companies – the “picks-and-shovels” – that will make 5G a reality. And one of them is one of my top stocks of 2020.

This company developed a device – a “Master Key” – that unlocks the true potential of 5G. In fact, the 5G revolution can’t happen without this company’s technology.

That’s why telecom giants are already making multimillion-dollar deals to get their hands on this “Master Key.” Even the Pentagon is getting involved.

This tiny company is still flying under the radar. Go right here before this company surges higher.