Bitcoin has woken up.

Actually, I take that back…

It’s gone parabolic. See for yourself: 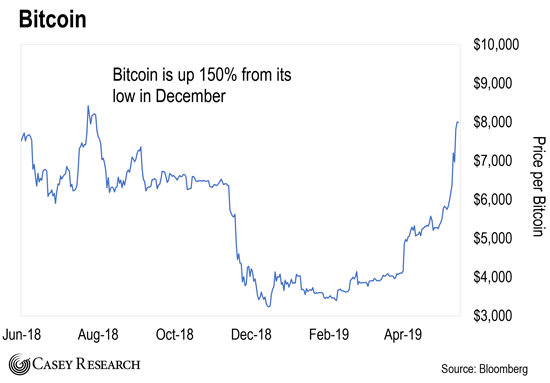 And it’s not alone.

• The entire crypto market has taken off…

The total market value of the space has nearly doubled since the start of the year. Some individual cryptos have soared more than 300%.

Those are truly explosive moves.

Normally, I avoid assets like this. That’s because you’re usually too late to the party by the time an asset goes on a run like this.

• But cryptocurrencies are a different beast…

In other words, what we’ve seen so far could be just a taste of what’s to come.

Of course, crypto is the most volatile asset on the planet. It can plunge as fast as it rises… if not faster.

Thankfully, I have a blockchain expert on speed dial.

He’s been involved with digital currencies since the late 1990s… long before the mysterious Satoshi Nakamoto invented Bitcoin.

Marco made so much money speculating on digital currencies that he dropped everything a few years ago to travel the world.

So I got Marco on the phone yesterday, and asked him what’s behind this rally. Here’s what he told me:

People often look to the news to come up with an explanation of what’s moving the markets. I think that’s a waste of time.

Not only is the day-to-day news ultimately irrelevant but we also cannot truly know what is moving the market. We now live in a globally connected village with capital flows across borders and industries. So the real cause might even originate from outside the market we are watching.

There is only one thing we can say for certain: Over the last few months, there have been more buyers than sellers of Bitcoin and the price is moving up.

• That’s not all Marco had to say…

He also told me why Bitcoin’s likely headed much higher:

It is very likely that the $3,200 range we have seen in December 2018 was the bottom of this cycle. Bitcoin has been trending upwards since then.

If you look at the chart it forms an ascending triangle. This is a sign of accumulation which is exactly what one would expect after a market has bottomed.

Now, that doesn’t mean Bitcoin will go straight up from here. More from Marco:

Over the last few weeks, Bitcoin made a dramatic move higher, almost without a pause.

After such an extreme move in such a short amount of time, one has to expect a correction. I think it’s probable that Bitcoin will move lower over the short term and retest at least the $6,000 area and possibly lower.

That said, I want to make something clear.

In fact, he says this new bull market could blow the 2017 bull run out of the water:

We now have more awareness of Bitcoin and cryptocurrencies than during the last bull market. There are also many new avenues for newcomers to get involved. It’s becoming easier to buy and use cryptos all the time.

But what’s even more important is that the Blockchain Ecosystem is developing rapidly. Many of the promised decentralized finance, media, and business solutions are finally becoming available. Blockchains are becoming faster and more efficient.

In short, the excess of 2017 has been worked out. More awareness, easier ways to participate, and better technology, products, and services will lead to a massive new bull market.

Because of this, Marco encourages speculators to have a long-term view:

I don’t think so.

Smart speculators accumulate around the bottom of a cycle and sell around the top. You don’t need perfect timing to make a lot of money.

The Blockchain Ecosystem is in a secular bull market that will last at least another decade. Now is a great time to get involved.

So consider buying Bitcoin if you haven’t yet. Just don’t get in over your head. In other words, don’t bet more money on Bitcoin than you can afford to lose. After all, if Marco’s right, you won’t need to own much to make a killing in the years to come.

• Of course, Bitcoin’s just one cryptocurrency…

There are thousands of others. And many will likely outperform Bitcoin by orders of magnitude in the coming years.

Remember, Marco’s been analyzing digital currencies for decades. He knows the difference between a garbage coin and a world-class project.

And he’s been telling his subscribers to buy solid, small-cap crypto projects with massive upside.

One of his recommendations is up 77% since late January… and he sees much bigger gains to come. This explosive project is still in buy range today.

You can access this name – and all of Marco’s extensive research on cryptos – with a subscription to Disruptive Profits. Go here to sign up today.

Do you plan on getting in on the next crypto bull run? Why or why not? Let us know at [email protected].

Take Advantage of This Discount Before June…

On September 23-25, your favorite Casey Research gurus will be in Southern California at the second annual Legacy Investment Summit – and you’re invited.

You can spend time with Doug Casey, Marco Wutzer, E.B. Tucker, and Nick Giambruno… and financial heavy-hitters like Teeka Tiwari and Jeff Brown. It’s a one-of-a-kind opportunity to get the inside scoop on the big ideas we’re most excited about for 2019 and beyond.

And as a Dispatch subscriber, you’re entitled to pay hundreds less than everyone else until May 31. Take advantage today.