Justin’s note: If you haven’t heard yet, Strategic Investor editor E.B. Tucker’s working on a new venture. He plans to share all the details about this product at the end of this month. Leading up to that big announcement, we’re featuring his best insights and money-making opportunities.

But you should first get to know E.B., if you don’t already. He’s one of the best big picture thinkers in our business. And his track record shows it. Just look at some of the big calls he’s nailed…

In short, it pays to listen to E.B… especially when he’s pounding the table on a big idea. And that’s what today’s essay is all about.

Below, E.B. explains why we’re entering “the biggest energy shift of our time.” A new type of energy is taking over. And that’s opened the door to a huge money-making opportunity…

A society is only as strong as its access to supplies of reliable energy. While the source of that energy changes over time, one thing doesn’t: Controlling the supply of that energy is as close to printing money as you’ll ever get.

Last century, oil fueled society. Barons like Jean Paul Getty made so much money supplying society with oil, the wealth became a burden. From the Rockefellers to the Saudi royals, the story is the same. Controlling the supply of energy is equivalent to a levy on the entire economy.

Before oil, it was coal. Coal created scores of 19th-century fortunes. Even Andrew Mellon, who later became Secretary of the Treasury and the third-largest taxpayer in the 1920s (behind Rockefeller and Ford), got his start in the coal business.

Today, we’re on the dawn of a new era in energy. 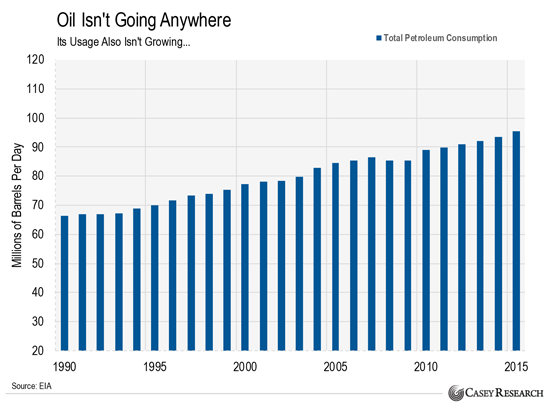 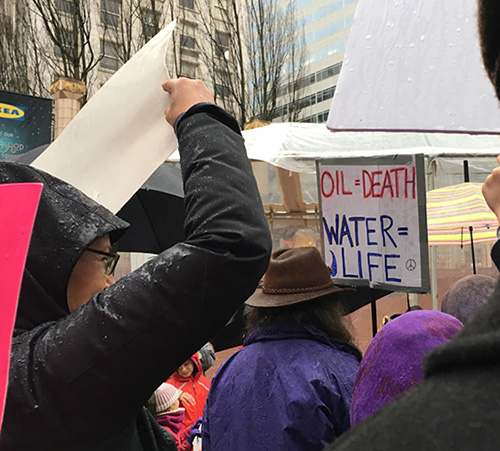 Then, take taxes into consideration. Every gallon of gasoline sold in the U.S. has a $0.184 federal levy placed on it… and some states, like Pennsylvania (the highest case), pile on as much as $0.582 per gallon on top of that. States need that money to fund their bloated budgets.

And the metals that make up these batteries are creating a new “gold rush.”

Because these more advanced batteries will hand forward-thinking investors the opportunity of a lifetime – and make two things a reality:

Earlier, we showed you a chart of oil usage. While it’s a big number, it’s not growing very fast. At least, not compared to this chart… 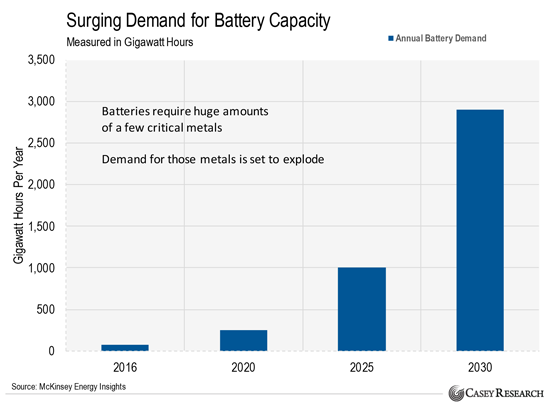 The chart above measures battery demand in gigawatt hours (GWh). To put things into perspective, in 2016, all consumer products with lithium-ion batteries added up to 45 GWh, according to The Economist. That means every cordless drill, smartphone, and even e-cigarette combined. Electric car batteries produced that year added another 25 GWh.

There’s no comparison. New energy sources will leap over oil’s tepid growth in the coming years. With clean energy economic incentives in place, no protesters, and technology on its side, a new energy source is set to power the future.

P.S. I recently released an important video describing everything you need to know about “America’s Third Power Shift.”

In short, the biggest power shift in the last 100 years is happening now. And it’s creating a tipping point in the next generation of energy metals. If you know where to put your money ahead of time, you could see once-in-a-lifetime gains. We’re set up to profit from this megatrend in my Strategic Investor newsletter… and you can join.

Check out my presentation here…

Are you bullish on new energy sources? How about the metals that will profit? Let us know at [email protected].

Profiting from America’s third power shift is just one of the many big ideas E.B. has to help you make a fortune in today’s markets.

The idea he’s most excited about right now is a little-known strategy you can use to generate gains 10x bigger than options. It’s a specific type of investment that Doug Casey uses too…

E.B. and Doug are ready to share the details on this strategy later this month in what’s sure to be one of the most important events in Casey Research’s history.

We’ll let you know more details over the coming weeks.